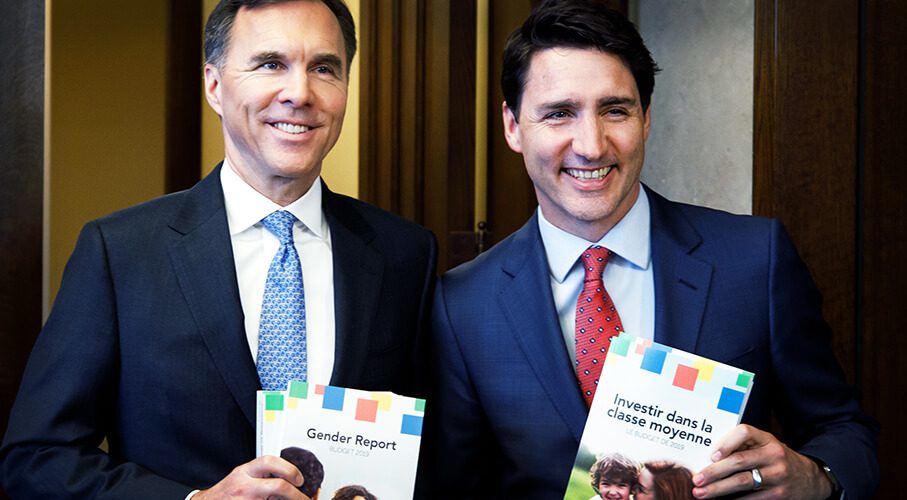 It was wrong to push up deficits during good times, which now hangs as a massive weight on the Trudeau government’s fiscal neck, writes Jack Mintz.

The good ship “Federal Budget” looks like it is about to hit the rocks. Expect a broken promise as the federal debt/GDP ratio rises with moribund growth in the first half of 2020.

What could also happen is something that we have not seen for some time: federal program spending outstripping revenues. This is called the primary (or operational) deficit when a government not only can’t cover debt interest payments (totalling $23.9 billion in 2018/9) but also its program expenses.

A primary deficit has not appeared since the fiscal years 2009/10 and 2010/11 when a severe global financial recession took place. For two decades prior to 2009, we had only federal primary surpluses. Even in the latter Mulroney years with a deep 1990-91 recession, Canada ran a primary surplus. The real story was profligate spending during the Pierre Trudeau years resulting in a string of primary deficits starting in 1975/76 for over 12 years, even during robust growth years.

The Pierre Trudeau years from 1975-84 were the worst with primary deficits accumulating to $900 billion (indexed to 2019 values at the government bond rate for comparability). The Chrétien years saw enormous surpluses to break the back of the debt crisis when Canada had difficulty selling its bonds to the international market.

In 2016/7 and 2017/8, Canada skirted close to the line with its primary surplus almost disappearing. The primary surplus did widen in 2018/9, reaching over $9 billion, but this cushion was only 0.3 per cent of total revenues. It would not take much of a swing for the primary deficit to reappear.

And this looks to happen in 2020. Canada’s 2019 GDP growth rate was 1.6 per cent but barely squeaked out any growth in the last quarter (0.1 per cent). With the transportation blockades, the economy in the first quarter is expected to be flatlined. Now a potential global recession is imminent with a global growth rate at less than the IMF threshold of 2.5 per cent in the wake of a contraction in the Chinese economy. Should the coronavirus become more prevalent in Europe and North America, Canada can expect a major downturn, too.

Many economists have forewarned that the federal government should ensure it has enough gunpowder for the next downturn by running surpluses in the good years. This lesson was learned when fiscal policy got out of hand in the 1970s and 1980s with general government gross debt (including provincial and municipal debt on a national accounts basis) eventually peaking at over 100 per cent of GDP in 1995/6. Today, general government gross debt is now almost 90 per cent of GDP, 20 points higher than 2007, the year before our last recession. Federal liabilities add up to close to $1.2 trillion (net financial debt is $772 billion). Almost 30 per cent of federal debt is held by non-residents, even more so than mid-1990s when Canadian bonds almost became junk bonds.

The return of the 1970s may already be upon us. Federal program spending has been growing faster than the economy, rising from 12.8 per cent in 2014/15 to 14.6 per cent of GDP in 2018/19. If spending grows faster than tax revenues in the coming few years, the deficit and debt will expand relative to the size of economy. The minority government has promised a climate change budget that you can bet will mean more subsidies for electric vehicles, renewable power and energy efficiency. Pressures to spend more on defence, Pharmacare, a UN security council seat, transfers to provinces and to fulfill other election promises will grease the wheels further.

So, if the federal government is to keep the debt/GDP promise intact, it will need to raise taxes. However, one already-adopted election promise — expanding the personal tax exemption — will cost $3 billion in 2020/21. As for tax increases, potential revenue increases will be more modest including a digital tax on large technology companies (likely to attract U.S. retaliation), a property tax on housing held by non-residents, GST on digital sales (Netflix tax), a limit on corporate interest deductions and full taxation of stock options (with most of the revenue offset by an employer deduction for option costs). The big one would be an increase in the capital gains tax paid by individuals, trusts and corporations that could yield roughly $11 billion federally, although this does not reflect the current stock market rout.

Raising taxes when the economy is at risk is a singularly bad idea. Non-residential investment is declining. Household consumption is holding up but that may weaken soon if employment stalls due to a global slowdown and lower commodity prices. Tax hikes simply sap further private sector confidence.

The likely result, therefore, is for the Trudeau government to simply break its promise by letting the debt/GDP growth rise. None of this surprising. Just like promises to always balance the budget, one cannot avoid debt rising faster than GDP during a downturn. That is why it was wrong to push up deficits during good times, which now hangs as a massive weight on the Trudeau government’s fiscal neck.