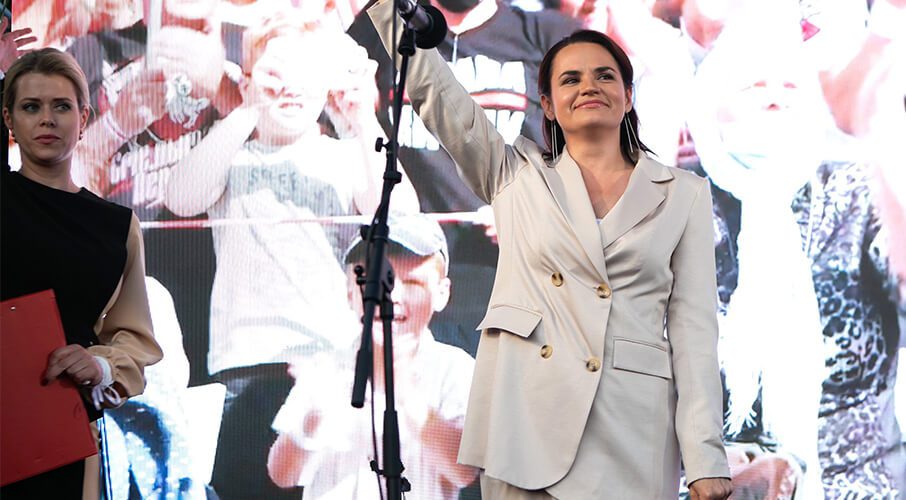 A feminist pro-democracy uprising is taking place in Belarus, yet the leadership that Canada’s self-proclaimed feminist prime minister and foreign minster should be taking to support them, has thus far been limited to expressions of “concern," writes Marcus Kolga.

A feminist pro-democracy uprising is taking place in Belarus, yet the leadership that Canada’s self-proclaimed feminist prime minister and foreign minster should be taking to support them, has thus far been limited to expressions of “concern.”

Led by three women, Belarusians have braved the threat of violent repression to rally for their freedom and democracy since May. Despite credible claims of mass electoral fraud, Belarus’s dictator Aleksander Lukashenka claimed yet another electoral victory last week, extending his 26-year rule, for another five years.

The results in electoral precincts that refused to falsify election results, demonstrated a very different picture where opposition candidate, Svetlana Tikhanovskaya, won by up to 80 per cent.

Far from respecting the true outcome of the election, Lukashenka has instead engaged in a campaign of violent and often arbitrary repression aimed at suppressing thousands of Belarusians who have taken to the streets to call for new and transparent elections.

Over the past week, over 6,000 demonstrators have been arrested and at least two have been killed. Reports of mass torture and human rights abuse in Belarusian prisons have been posted on social media. On the streets of Minsk, videos show police randomly stopping cars (often intentionally crashing into them), dragging passengers out onto the streets and beating them with batons. The crackdown can only be described as savage.

Tikhanovskaya was forced to flee Belarus to neighbouring Lithuania, after being threatened and coerced into reading a statement calling on Belarusians to accept the grossly fabricated official outcome of the election.

Last Wednesday, hundreds of women dressed in white, formed “solidarity chains” in a mass demonstration in support of Tikhanovskaya, and all the women who have led the Belarusian pro-democracy movement. On Sunday, nearly 200,000 Belarusians took to the streets of Minsk to demand Lukashenka’s resignation.

Without a firm Western response to address the violence in Belarus, Lukashenka may intensify repression while receiving encouragement to do so from Russian President Vladimir Putin, who is currently facing large protests in Russia’s Far East. The possibility that the Kremlin may exploit the ongoing crisis to intervene directly in support of Lukashenka cannot be discounted, nor can the possibility that Putin may decide to seize all, or some part of Belarus in that process.

In contrast, a free and democratic Belarus would almost certainly seek closer integration with Europe and the West, contributing to a more unified and stable Eastern European region.

In either case, the outcome of this crisis will have long-term security consequences for the region, NATO and Canada.

One would assume that the uniquely feminine nature of the Belarusian pro-democracy uprising would offer a perfect opportunity for Justin Trudeau and Minister François-Philippe Champagne to put Canada’s much touted feminist foreign policy into practical and bold action. So far, they have not.

Backstopped by that feminine foreign policy, Canada should be co-ordinating within the G7, and with the EU, to apply Magnitsky sanctions against Lukashenka, his electoral chief Lidia Yermoshina, who has overseen mass electoral fraud in every Belarusian election since 1994, and those responsible for violent repression Belarusians have endured this past week.

Canada’s experience and connections supporting Ukrainian reform since 2014, would serve Belarusians and our regional allies well. Canada should work with the EU to help organize a western summit on Belarus and co-ordinate international support to ensure the transparency of any new, rerun, presidential election.

Canada should also be working closely with NATO allies in Lithuania, whose foreign minister, Linus Linkevicius, has taken on much of the heaving lifting to support the Belarusian opposition, to co-ordinate support for civil society groups, and to ensure channels of communication with the western democratic world remain open, including the internet.

Finally, Canada must call for an immediate investigation into the Lukashenka regime’s electoral fraud, criminal abuse of human rights — including in the UN and OSCE — and at the International Criminal Court.

Ultimately, it is in Canada’s foreign policy and national security interests to support the people of Belarus in their struggle for a free and democratic future. Belarusians are currently facing mass human rights abuses from a state unwilling to recognize the true results of the election. Canada needs to stand firmly with them.