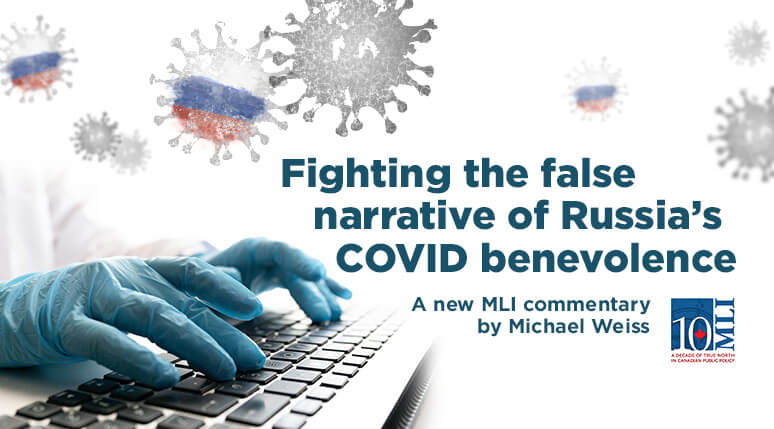 OTTAWA, ON (June 22, 2020): COVID-19 has led to an equally worrisome outbreak of disinformation and false narratives from actors like the Kremlin. By suppressing the facts at home and spreading false information abroad, Russia has attempted to leverage this crisis to accomplish its broader geopolitical goals.

In a new MLI commentary titled Fighting the false narrative of Russia’s COVID benevolence, Daily Beast Editor-at-Large Michael Weiss delves further into Russia’s disinformation tactics and its ambitions during the COVID era. This commentary is based on remarks Weiss delivered during a recent MLI webinar event.

Weiss describes Russia’s disinformation campaign as consisting of three interconnected ‘tropes.’ First, there is the typical portrayal of the real or alleged failures of the EU and its members states in not confronting the public health crisis early on. Second, the Kremlin has pushed a slow stream of disinformation regarding measures taken – or not taken – by the EU and its members states. Finally, and most importantly, Russia has been quick to portray itself as a more capable alternative benefactor.

According to Weiss, “it should come as no surprise that Russian state media organs have also indulged in the usual nonsense and conspiracy theories about the etiology of the virus – especially to trace its origins to an American billionaire philanthropist.”

Yet the more universal aspect of Russia’s disinformation campaign is to undermine the West and present Russia as the true champion of health and safety.

Weiss argues that this kind campaign is perhaps best encapsulated by Russia’s “humanitarian campaigns” in Italy. Between March 23 and 25, Russian planes arrived at an Italian military airbase with equipment, vehicles, doctors, and 122 officers of Russia’s Radiological Chemical and Biological Weapons Defence unit at the invitation of the Italian government.

However, some 80 percent of Russia’s ‘aid’ – delivered as part of its ‘From Russia with Love’ mission – was reportedly either useless or superfluous. Moreover, the Russian aid convoy deliberately landed outside of its intended destination, leading to speculation that the mission was a cover for Russian intelligence gathering operations.

“Landing at Practica di Mare was a curious logistical choice since the region in Italy most affected by coronavirus was Lombardy,” Weiss noted. “Twenty-two Russian vehicles plus buses transporting military specialists made the six-and-a-half-hour journey across the country, following an intense public relations campaign by the Kremlin to amplify this mission.”

“’From Russia with Love’ was little more than an active measure with an espionage component built right into it.”

The Russian government responded in their usual fashion by trotting out buzzwords and accusations such as “Russophobia,” “Cold War psy-ops,” and “anti-Soviet,” propaganda. This defensiveness was met with more Western sources substantiating the claims that Russia’s aid mission had little to do with humanitarianism.

Still, the Russian government continued to engage in their “benevolence” campaigns around the world. A large An-124 military transport plane filled with boxes of masks and ventilators even landed in New York, prompting a heartfelt thanks from the Trump administration.

Sadly, this propaganda campaign has come at a cost for Russian citizens. While the Kremlin spent time and money in its so-called ‘mask diplomacy,’ Weiss writes that doctors in Russia were “working without such badly needed personal protection equipment and contracting the virus as a result.”

Read the full commentary here or watch MLI’s webinar here. Weiss also appeared on MLI's latest episode of Pod Bless Canada to discuss these issues in greater depth. That podcast can be listened to here.