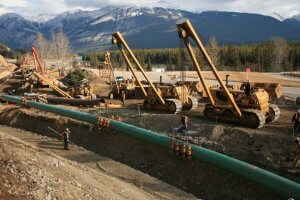 The reaction to the recent Federal Court of Appeal decision on the Trans Mountain pipeline has been near hysterical — and for good reason. The stoppage of the pipeline project, the best-studied project in Canadian history and one with substantial Indigenous support, has people speaking with despair about the future of the oil and gas industry in the country, the now-diminished prospects for future development, and even the fragility of Canadian federalism.

First Nations peoples who support the pipeline — and there are many — agree that the situation is dire, but we see more than a few reasons for optimism in the midst of the anxiety.

The debate over the pipeline expansion has forced First Nations, Métis and Inuit people across Canada to think very hard about where oil and gas development and infrastructure projects fit into their economic and environmental futures. An enormous amount of attention has been paid to the First Nations on the British Columbia coast, who oppose the pipeline or, more accurately, the ocean shipping associated with getting those products to world markets. We recognize and honour their commitment and their world, even if we do not share particular points of view.

We have heard, also, a great deal from environmentalists, many of whom proudly declare that they are working on behalf of the First Nations. We do not need that. They do not speak for all of us. We share the environmentalists’ concerns about the future of our planet, but wonder why they are so determined to undercut the few opportunities we have to enjoy the kind of economic prosperity that non-Indigenous peoples take for granted in this country.

Many Indigenous communities, including those represented by the Indian Resource Council, have come to terms with the oil and gas industry. Our Nations have invested wisely in the sector and are willing to invest even more. Canadians may be surprised to hear of First Nations wanting to buy all or part of the Trans Mountain pipeline. For us, it is a logical extension of the engagement we have had over 20-plus years. When pipeline opponents use the courts to slow or stop pipelines, they undermine our businesses, eliminate jobs in our communities and reduce the amount of money flowing to our governments.

But there are lessons for all Canadians in the Trans Mountain decision. Indigenous rights mean something. Consultation has to be real, robust and meaningful. This does not mean that every Indigenous community will get everything they want out of every development project. We understand and respect the authority of the Government of Canada and its mandate to address the needs of other Canadians.

But our rights are meaningful and powerful. There are no shortcuts around the duty to consult and accommodate. We have the right to be heard. We have the right to be part of the solution to the challenges facing Canadian resource developers. This works. Our communities are partners with hundreds of oil, gas and transmission companies across the country. Our resource-active communities are gaining autonomy from government and are showing that we will be an active and progressive part of this country’s economic future.

Please do not hold Indigenous peoples to a double standard, as Canadians have often done in the past. Some First Nations oppose oil and gas development and others do not, just like other Canadians. After all, it was opposition by the City of Montreal, not Indigenous groups, that helped kill the Energy East pipeline project.

So as Canada contemplates the Trans Mountain decision, let’s focus on both the short and the long term. The Government of Canada needs to revisit its consultation processes and get it right this time. The oil-and-gas-producing Nations hope that the Trans Mountain pipeline can proceed. But let’s also use this occasion to build the foundation for a different future where Indigenous peoples are seen, from the outset, as partners in a new development process, not a barrier to be hurdled or an irritation to be brushed aside.

We have waited for generations for a chance to be treated as economic partners. We now have the political and legal authority to ensure attention to our needs and interests. The Trans Mountain pipeline controversy shows how important it is that Indigenous peoples, the Government of Canada and all Canadians get this right.

Stephen Buffalo is the president and CEO of the Indian Resource Council and an MLI author.