Fiscal policy must be sustainable over the long term: Sean Speer and Robert Asselin in Policy Options 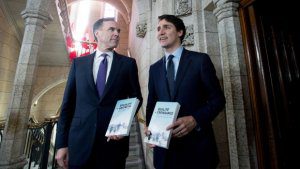 In order to make sound budgetary choices the federal government need a fiscal policy framework that is evidence-based and is sustainable in the long-term, write Sean Speer and Robert Asselin.

Next year’s federal budget may be months away, but preparations have already begun in earnest. The House of Commons Standing Committee on Finance’s call for prebudget submissions was launched in June and closes in early August. There will be hundreds of recommendations from various organizations for the committee and the Finance Minister to consider between now and the budget’s tabling. Some will be good. Others will be bad. Most will involve more spending and have a short-term focus.

What will generally be lacking from these submissions is a fiscal policy framework that protects Canada’s long-term fiscal capacity and roots public spending choices in clear and evidence-based benchmarks. This is something that should transcend partisanship or ideology. We can debate what government should do, how it should do it and who should pay for it. But we should be able to agree that public spending should be efficacious and fiscal policy must be sustainable over the long term. It’s ultimately about arithmetic, the proper stewardship of taxpayer resources and protecting our collective ability to make the right policy choices in the future.

The global financial crisis in 2008-09 provoked an enormous monetary and fiscal stimulus from Canadian governments to minimize the negative effects on investment and employment. Monetary and fiscal tools were used to their full potential. The Bank of Canada’s policy rate (or the target for the overnight rate, as it is often called) was reduced to its lower bound of 0.25 percent in 2009. Federal fiscal stimulus — that is, deliberate, short-term incremental public spending — reached nearly $50 billion alone.

These extraordinary measures generally worked. The recession was shorter and shallower here than in most jurisdictions. Canada’s prudential regulatory framework, rules-based monetary policy and sound public finances were major reasons for our relatively positive performance. Long-term thinking on the part of successive Canadian governments had provided the policy flexibility needed for an effective response. As the former Bank of Canada official Jean Boivin put it: “This favourable position gave Canada the flexibility it needed to respond strongly to the crisis without compromising the credibility of our public policy frameworks.”

Yet it’s been more than nine years since the end of the recession, and there remains a monetary and fiscal hangover. Interest rates remain historically low. Ottawa and most of the provinces (with the exception of Quebec) are running budgetary deficits for the foreseeable future. Canada’s “favourable position” is assuredly weaker now.

The hard truth is that policy-makers will have almost no policy leverage when the next recession hits — which, according to historical trends, tends to occur every eight years or so.

The hard truth is that policy-makers will have almost no policy leverage when the next recession hits — which, according to historical trends, tends to occur every eight years or so. The Bank of Canada’s overnight rate is still only 1.5 percent and can’t go much lower if things get worse. Monetary policy flexibility is thus much more limited now. Ottawa’s deficit is now less than 1 percent of GDP; increasing it to 2 or 3 percent for stimulus purposes would bring it to a substantial level. And the risk, of course, is that under weaker economic conditions, short-term deficits could become structural and permanent.

It is important therefore that fiscal policy be used wisely at the various stages in the economic cycle. Deficit spending should be mostly reserved for times of significant drops in economic activity rather than for periodic fluctuations, and it shouldn’t be used to fund new or recurring spending with no link to economic growth. The goal should be a stable, predictable fiscal framework that relies on budgetary deficits only in specific and extraordinary circumstances.

We only need to look to the United States to see the negative effects of the normalization of budgetary deficits due to both unfunded tax cuts and unsustainable spending. A new report from the Congressional Budget Office shows that US fiscal profligacy has led to a deficit of 5 to 6 percent of GDP, and debt-servicing costs are poised to emerge as Washington’s single largest government expenditure within 30 years. This isn’t trivial. The eventual fiscal adjustment in the form of tax increases and deep spending cuts will be costly and disruptive. The only question at this stage is its magnitude.

The path to fiscal unsustainability has considerable generational implications in terms of both cause and effect. The aging of the Canadian population only reinforces the need to protect our long-term fiscal capacity. The senior dependency ratio — that is, the ratio of individuals 65 years of age and older relative to the population between 15 and 64 — is projected to rise from 25 percent in 2016 to 40 percent by 2040. This shift will place further pressure on public budgets: more money will be needed to fund higher pension benefits and health care spending, while growth in the labour force and in the overall economy will be slower. Fewer resources will be available to invest in education, family benefits and other programming that benefit younger generations.

There ought to be much greater political focus on our long-term fiscal position in order to protect our fiscal capacity to respond to a future recession and to adjust to the coming budgetary pressures from the aging of Canadians.

This demographics-driven effect has been called a “fiscal squeeze,” a “grey tsunami” and even a budgetary “glacier.” Irrespective of the nomenclature, there ought to be much greater political focus on our long-term fiscal position in order to protect our fiscal capacity to respond to a future recession and to adjust to the coming budgetary pressures from the aging of Canadians.

This brings us to another observation about the political overemphasis on overall budget figures rather than the underlying revenue and spending choices. It’s not enough merely to focus on a balanced budget as an end in itself. A singular focus on budgetary balance can wrongly justify any or all new spending as long as revenues and outlays are reconciled. It’s just as important that we have clear benchmarks for evaluating ongoing and new public spending on its own merits.

All forms of taxation impose economic costs. Public spending should produce benefits that, at the minimum, outweigh the cost of each additional dollar collected by the government. But it requires a better framework to judge when and how governments should intervene. The process too often lacks a clear understanding of what constitutes a market failure or the magnitude of an externality. The bias is always in favour of more spending.

We have been involved in several federal budgets. We can attest that an evidence-based approach is too rarely applied to new spending in the budget process. And it’s almost never used to evaluate current spending. The problem is that more than $300 billion in federal program spending doesn’t face enough scrutiny about its purpose or efficacy.

There’s a need to drill down into this annual spending to better understand whether it’s justified and achieving results. The budget process shouldn’t start by assuming that each and every expenditure should be preserved or should continue at the same level and that the only decisions involve where and how to spend more. One way to bring about major reform would be to adopt some form of “zero-based budgeting,” by which all existing spending is questioned and subjected to a regularized, rolling review by the cabinet, Parliament or both.

Of the $304 billion in federal program spending for 2017-18 (figure 1), more than half comprises major transfers to persons (such as old age security and employment insurance) and major transfers to other levels of government (such as the Canada Health Transfer). The remaining share is called “direct program spending.” It includes $95 billion in operating expenses such as salaries and benefits.

Even if one sets aside the major transfers to persons and other levels of government, there’s nearly $140 billion in annual spending that ought to face tough questions. Here are some tests:

We’re certainly not proposing draconian cuts. But, having been through several budget-making exercises, we can confirm that there’s a need to rethink how we scrutinize new and existing public spending. Establishing an evidence-based process would not only help to improve fiscal sustainability over the long term, it could help the finance minister and Parliament to weigh new spending proposals against existing spending and to direct scarce public resources to those programs and services with the most “bang for the buck.”

Politics invariably forces governments to make short-term budgetary choices that have financial implications. That’s the case with any government. But the key is to try to focus on the long term to the extent possible. A clear fiscal policy framework can help.

Sean Speer is a Munk Senior Fellow at the Macdonald-Laurier Institute and a former adviser to Prime Minister Stephen Harper. Robert Asselin is a former adviser to Finance Minister Bill Morneau. Both Speer and Asselin are senior fellows at the University of Toronto’s School of Public Policy & Governance.