Ford has an excellent reason for invoking the notwithstanding clause — protecting taxpayers: Philip Cross in the Financial Post 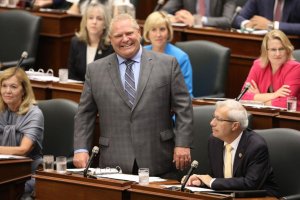 Ford’s action is a welcome reassertion of power by our political class that has been cowed, bullied and browbeaten by court decisions, writes Philip Cross.

Premier Doug Ford’s government in Ontario is being criticized for invoking the Constitution’s notwithstanding clause to proceed with downsizing Toronto’s city council after a court decision ruled the legislation unconstitutional. Some argue this is overkill, considering the amount of money Ford will save in reforming Toronto’s government might amount to only a few million dollars a year. Yet many of these same people apparently feel millions of dollars are significant when criticizing CEO pay. What level of government spending is significant if not millions?

Ford’s action is a welcome reassertion of power by our political class that has been cowed, bullied and browbeaten too often recently by court decisions, such as the one striking down the approval of the Trans Mountain pipeline expansion. The 18 court cases (and counting) launched by Trans Mountain opponents testify to how social activists rely on soliciting an accommodating judicial system to achieve their goals outside of the political arena. Their second-favourite tactic is taking over city governments — which is made possible because extremely low voter turnout lets a small band of militants grab power when the rest of us are not paying attention. It is defensible for politicians to use whatever legal tools are at hand to assert their sovereignty over taxing and spending.

One of the founding principles of democracy is “‘No taxation without representation.” It animated the Boston Tea Party and the American Revolution. Its principles can be traced all the way back to the Magna Carta in 13th-century England. It is a rallying cry against the arbitrary abuse of power, whether committed by the executive branch or the courts.

This fundamental principle of “no taxation without representation” has been under growing threat in Canada since the Charter of Rights and Freedoms was adopted in the Constitution in 1982. Before then, the courts accepted that laws enhanced freedom by enforcing boundaries against wrongful conduct and the arbitrary exercise of state power. Since the Charter was adopted, there has been a growing trend to judicial activism where the courts decide on policies that affect how taxpayer dollars are spent. This encroaches on what should be the exclusive domain of legislatures, which alone have the legitimacy to tax and spend. This is because only politicians are accountable to the people and understand that society cannot undertake everything that is desirable, implying that trade-offs and choices must be made that the courts are not equipped or trained to make.

There are many examples of the courts going well beyond the interpretation of constitutional law with implications for how money is spent. Funding health care for rejected refugee claimants drains precious resources from our most expensive public service. Granting public sector unions the right to bargain and strike ignored that there are no innate checks on public-sector union demands (unlike in the private sector, where workers know that their output can always be replaced by competing products or services). Judicial activism is why the Macdonald-Laurier Institute saw fit to crown the Supreme Court the “Policymaker of the Year” in 2014.

Judicial activism in Canada has not gone as far as in the U.S. American courts started down this road earlier, in the 1960s, and so the backlash against it is more developed than in Canada. This is evident in the recent hearings for President Donald Trump’s two nominees to the Supreme Court. Both Neil Gorsuch and Brett Kavanaugh have been faithful to the legendary conservative magistrate Antonin Scalia’s doctrine of strict adherence to interpreting laws as originally written, leaving any updating of the law, as circumstances change, to the political class where it belongs.

Hopefully Ford’s invocation of the notwithstanding clause signals to the courts and other politicians that judicial activism may be past its peak in Canada and courts will start to return to interpreting laws on the books, rather than applying dubious theories of “social change” from the bench. If nothing else, vivifying the long moribund notwithstanding clause helps prevent it from becoming effectively obsolete. It is a tool worth preserving to protect our democracy from judicial errors and excess.

Some have argued that the notwithstanding clause should only be invoked for the most important cases. Few things are more important than accountability for taxpayer dollars — in other words, representation with taxation. Accountability for the level of taxation and the allocation of spending were essential demands animating the call for more democracy in North America. While judges and social activists may dismiss the importance of money in the misguided belief it is easily created and in ready supply, most ordinary people understand its scarcity.