OTTAWA, ON (June 19, 2020): In the wake of charges being formally levelled against Michael Kovrig and Michael Spavor, new nationwide polling for the Macdonald-Laurier Institute shows that the public believes by a wide margin that Canada and other democracies should speak up a lot more against gross human rights abuses by the government of China.

Respondents were informed of recent accusations against China of human rights abuses and violations of international rules. They were asked to rate the performance of Canada’s politicians for speaking out against these alleged wrongdoings. 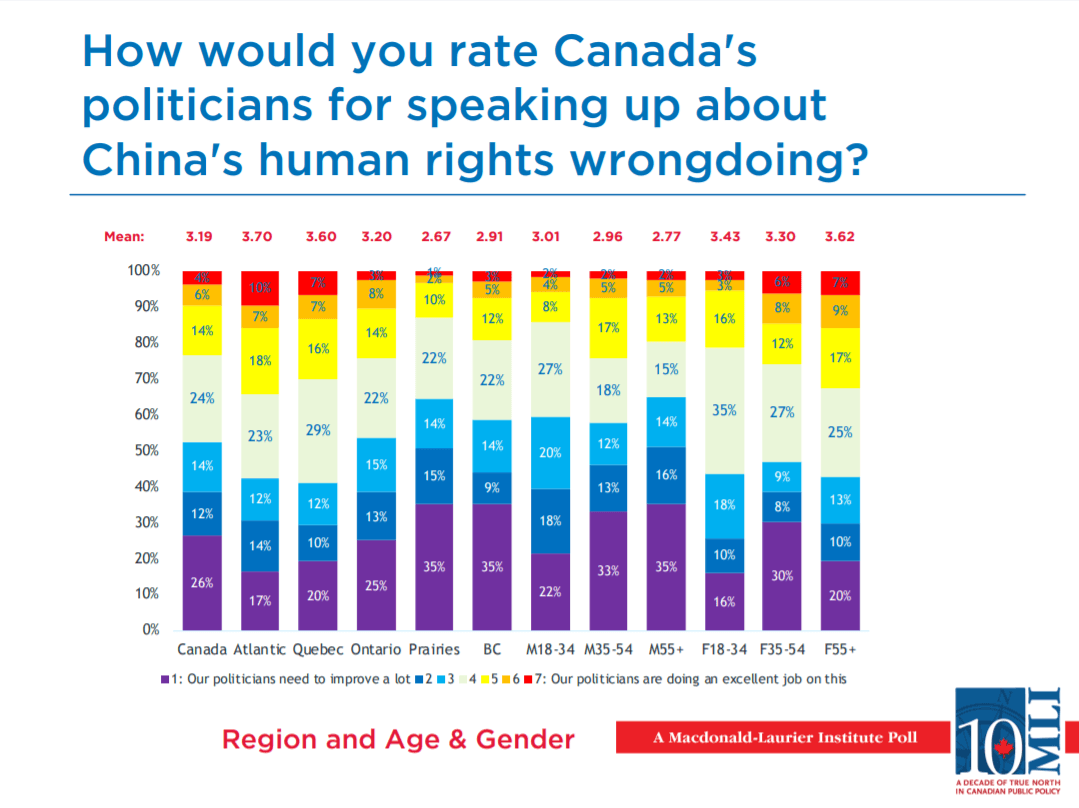 “Clearly Canadians are united in their belief that Canada must respond to China’s routine human rights abuses,” explained MLI Managing Director Brian Lee Crowley. “Equally importantly, Canadians believe in large part that this government is failing at that crucial task.” 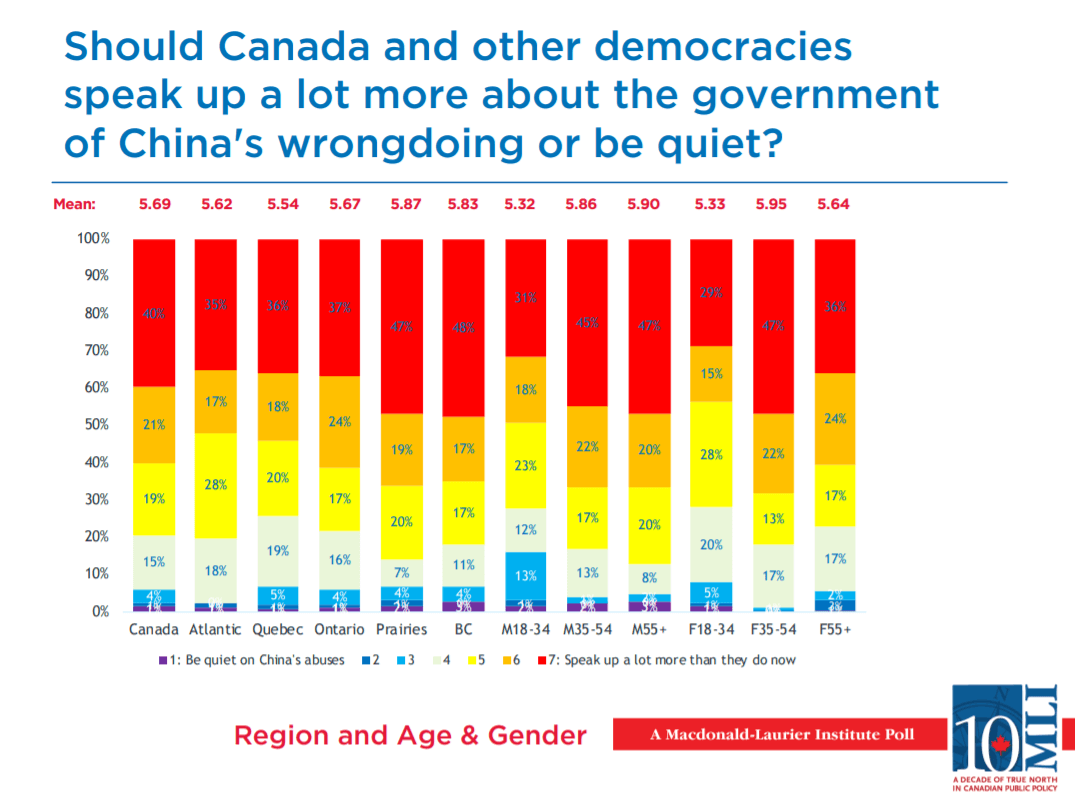 According to Crowley, “Canadians have articulated loudly and clearly that rather than keeping our voice down Canada must champion the cause of human rights in China. Now that Ottawa’s failed campaign for a seat on the UN Security Council is behind us, our leaders can and should feel freer to speak up on behalf of what Canadians believe.”

In reviewing the polling, Carleton University Professor and founder of COMPAS Research, Conrad Winn, noted that the results were “stunning,” and that rarely in Canadian political history has the general public been “so united in their concern as they are presently” about China’s human rights abuses. 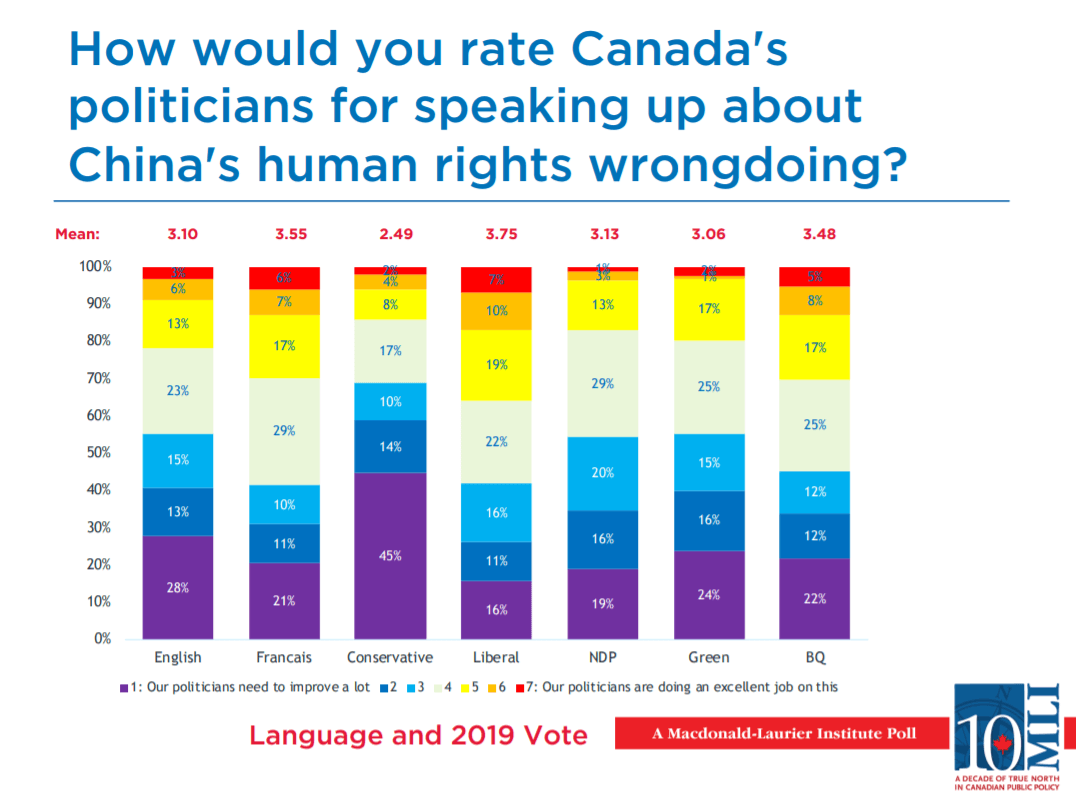 Though Canadians were largely uniform in their beliefs, there was some variation between voter groups.

Canadians who voted for the Conservative Party in the most recent election were especially critical of the current approach. They wanted a more vocal response from Canada. Nearly 90 percent believe that the government ought to speak out at least somewhat more.

The largest group of Liberal voters rated Canada’s performance poorly in terms of speaking up against China’s alleged human rights abuses (43 percent). Most Liberals (77 percent) believe that the government ought to denounce China’s alleged human rights abuses.  Liberal voters differed from others in that 36 percent of Liberals rated Canadian politicians’ performance at least somewhat positively. 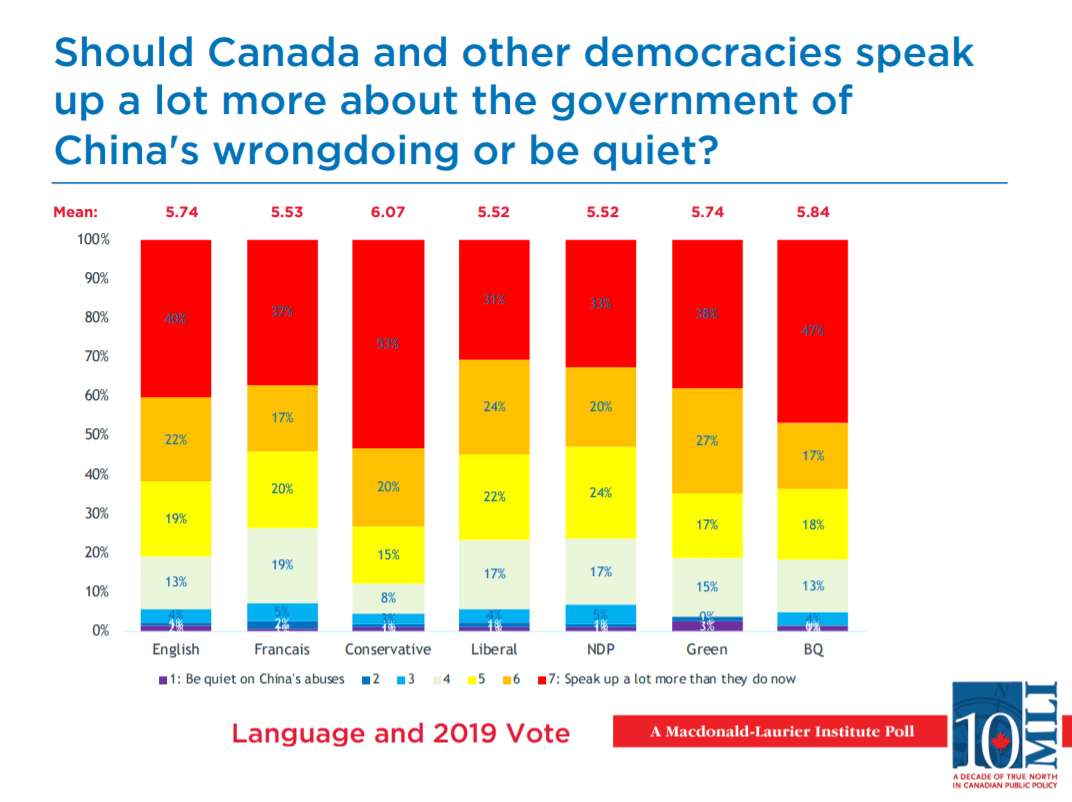 These results reflect what MLI Senior Fellow Charles Burton has described as a “turning of the tide of Canadian public opinion on China.” This trend “should be a wake-up call for the federal government… the Canadian public’s perception of China appears to be swinging dramatically.”

The poll, which was conducted by One Persuades on behalf of the Macdonald-Laurier Institute, captured the sentiments of 1000 Canadians. The poll has a margin of error of ±3.1 percent and is considered accurate 19 times out of 20.

Percentages expressed in this press release and other materials may be rounded and therefore may not always add up to exactly 100 percent.