A free, democratic and sovereign Taiwan is key to Japan’s national security: J. Michael Cole for Inside Policy 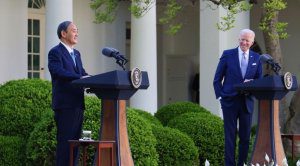 A joint statement by Japanese Prime Minister Yoshihide Suga and US President Joe Biden last week underscored the importance of Taiwan for the two allies to an extent not seen in half a century, writes J. Michael Cole.

A joint statement by Japanese Prime Minister Yoshihide Suga and US President Joe Biden last week underscored the importance of Taiwan for the two allies to an extent not seen in half a century.

The inclusion of Taiwan – the first since the 1960 joint statement between then Japanese prime minister Sato and then US president Nixon – followed strong encouragement by the US side for Japan to more clearly state its support for its democratic neighbour. China’s recent military escalation in the Taiwan Strait has made such a joint statement in support of Taiwan all the more important. US calls for regional allies to adopt a more overt position on the Taiwan Strait stem from the Biden administration’s renewed commitment to multilateralism. It also represents an acknowledgement by Washington that the US military no longer can confidently expect to successfully counter China’s destabilizing ambitions on its own.

Moreover, unlike China, whose military is now growing at a faster pace than Imperial Japan’s on the eve of World War II, the US military is spread across various theaters of operation. Simply put, it cannot concentrate its military power in the Asian theater to the same extent as the People’s Liberation Army. More than ever, the US must rely on the “force multiplier” provided by its alliance system, an advantage which Beijing currently does not have.

The willingness of the otherwise careful Suga government to take the unprecedented step of including Taiwan in the joint statement, and in doing so to risk Beijing’s ire, indicates clearly that Tokyo understands the need to deter against China’s attempted takeover of Taiwan – a possibility that can no longer be casually dimissed. Indicatively, it also departs from a tradition of keeping its commitments to safeguarding Taiwan away from the public view, lest a more overt policy derail Japan’s careful balancing of its relationship with China for both economic and historical reasons.

Such a statement of intentions is welcome in foreign policy circles and has received widespread attention in Taiwan itself. Still, outside government and think tanks, the fact remains that Taiwan does not figure as a matter of national security for the majority of ordinary Japanese. Although Japanese have warm feelings toward Taiwan, and a number of them may feel that Japan has some sort of moral responsibility toward its former colony, few regard its continued existence as a sovereign, democratic nation as a crucial factor in their own country’s security.

As long as those views prevail, it will be very difficult for any government in Tokyo to translate statements of purpose into actual planning for a Taiwan contingency and direct involvement by the Japan Self-Defense Forces (JSDF) in such a scenario. For the time being, the Japanese can only countenance joint exercises between the Taiwanese and Japanese coast guards and, in a war scenario, a supporting role by the JSDF should the US military become involved.

Much more needs to be done to convince the Japanese public that the preservation of a democratic Taiwan is more than a simple intellectual exercise or abstract concept. Taiwan is a frontline state in a brewing contest of ideologies, and its very geographical location makes it an essential component in Japan’s own security. In other words, defending Taiwan or preventing a military takeover against it are no longer a simple matter of altruism – saving a democracy – but are integral to the self-interest of countries like Japan.

Japanese national security would be severely undermined should China successfully occupy Taiwan and turn the island into a forward base from which it can project power into the entire Western Pacific. The repercussions to Japan would be immense, from the risks of blockade, higher costs involved for Japan’s trade with the rest of the world due to altered sea lines of communication, to having a PLA that is positioned within striking distance of contested territory in the East China Sea as well as Japan proper. Under such a scenario, the costs of re-arming Japan to defend itself against an immediate threat would arguably be much more substantial than what is currently needed to ensure appropriate deterrence against a Chinese assault directed at Taiwan.

Besides US pressure on Japan, the Taiwanese government could also do much more to “educate” the Japanese public as to why it is in their interest for Taiwan to remain free, democratic and sovereign. Taipei cannot afford to passively hope that neighbours will on their own reach such conclusions. If it wants other countries to have its back, it needs to make its case and demonstrate that it is willing to do everything within its power to defend itself.