In Freeland we trust: Christopher Sands for Inside Policy 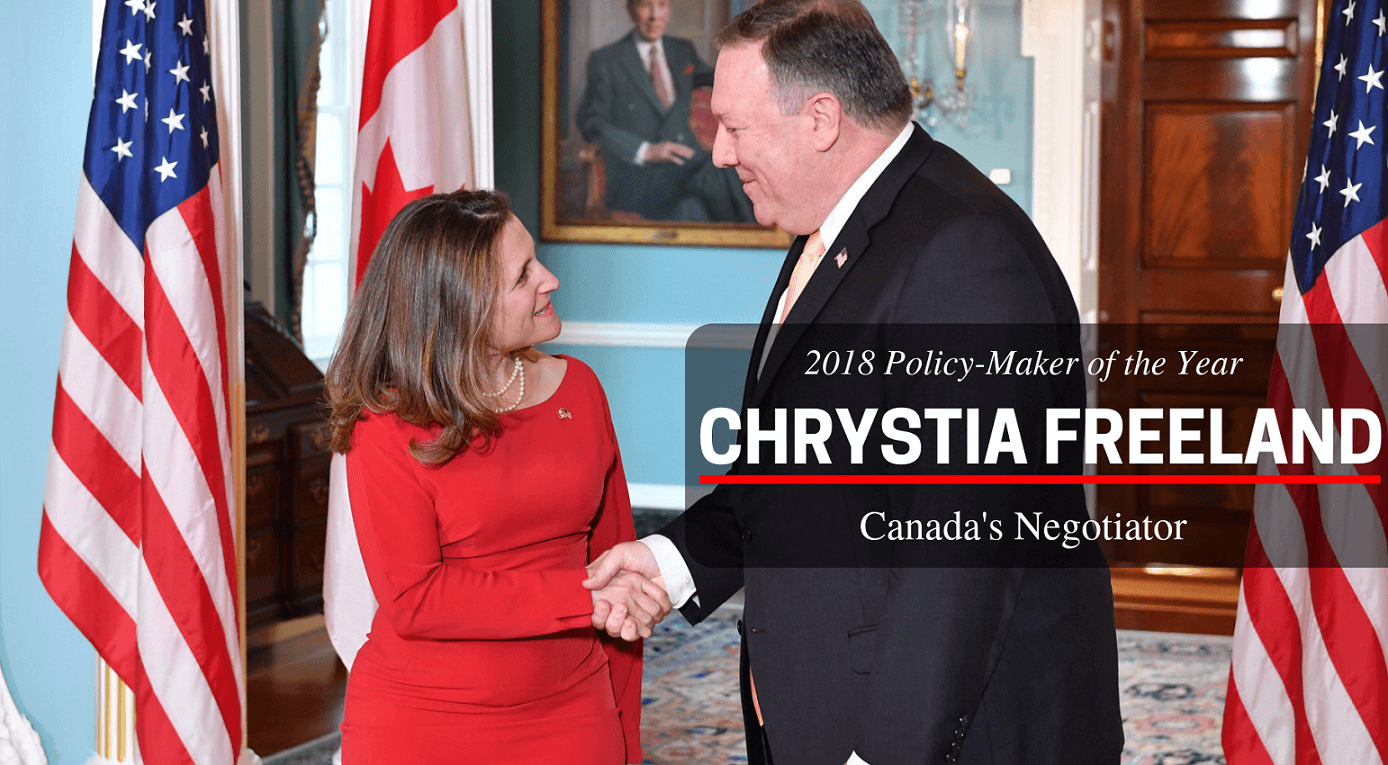 The first time that I met Chrystia Freeland was at the US Department of State in March 2016. The occasion was Canadian Prime Minister Justin Trudeau’s visit to Washington, where he was so warmly greeted by US President Barack Obama that the media in both countries characterized the relationship as a “bromance.”

Freeland was Canada’s Minister for International Trade then and joined the prime minister for a luncheon hosted by Secretary of State John Kerry. The “State Lunch” was the more wonkish alternative to the state dinner hosted for celebrities, party donors, and senior administration officials at the White House. It drew a crowd of foreign policy establishment figures and since the guest of honor was Canadian, the Canada-watchers in Washington were invited.

Trudeau was poised and dignified, carrying off the occasion with aplomb. Freeland was not the centre of attention, but she nonetheless made an impression on me. Perhaps even more than her boss, she was at ease in this room. One moment, she gave rapt attention to Kerry, who at six-foot-four-inches towered over Freeland’s five-foot-two-inches frame, with her intensity keeping other well-wishers respectfully at bay. In another moment, she embraced the seated Henry Kissinger in a bear hug before chatting affectionately with him for several minutes.

Freeland was well-known to the internationalist establishment in Washington, friendly with Democrats and Republicans alike. This is one reason why Freeland is one of very few Canadian foreign ministers who people in Washington could name from memory.

The 2016 election of Donald Trump as the 45th US president was a repudiation of the US establishment and leaders of both US political parties by disgruntled voters. The Trump administration translated its anti-establishment mandate into a campaign to revise the bargains that underlay the postwar liberal internationalist order that the United States built and maintained. Trump pledged to negotiate better deals that benefited the United States more, from NATO collective security guarantees to trade liberalization via the World Trade Organization and NAFTA.

The renegotiation of NAFTA was the element of President Trump’s agenda that most threatened Canada. The United States is Canada’s largest export market but also its gateway to global markets via participation in US-managed supply chains and utilizing US ports and infrastructure in some cases.

First as trade minister, then as foreign minister and Trudeau’s lead minister for relations with the United States, Chrystia Freeland championed free trade and collective security as the American principles that had sustained global peace and prosperity for more than half a century. She expressed the ideals once common to members of the Washington establishment when no one in Congress or the White House dared to do so.

First as trade minister, then as foreign minister and Trudeau’s lead minister for relations with the United States, Chrystia Freeland championed free trade and collective security as the American principles that had sustained global peace and prosperity for more than half a century. She expressed the ideals once common to members of the Washington establishment when no one in Congress or the White House dared to do so. It was this steadfastness (or sanctimony) that often annoyed the Trump administration, from the president to Secretary of Commerce Wilbur Ross to US Trade Representative Robert Lighthizer.

In the summer of 2018, the Trump administration’s anger with Canada and with Freeland herself burst into the open in a sharp rebuke of Trudeau by Trump following the June G7 Summit in Charlevoix. Then Freeland accepted an award from the editors of the Carnegie Endowment for International Peace’s magazine, Foreign Policy, as “diplomat of the year” with a speech that cemented her role as a fighter for Canadian values, doyenne of the American establishment, and one of the most vocal and articulate foreign critics of Trump’s foreign policy.

For several weeks in August and September, it appeared that Trudeau and Freeland might have lost so much goodwill in the White House that the United States would negotiate a bilateral deal with Mexico instead. Yet Freeland had cultivated a relationship with Mexico’s Idelfonso Guajardo that proved its value by giving Canada insight into what was happening when Canada was out of the talks. It was also under her leadership that Canada had undertaken an unprecedented outreach campaign – coordinated by Canada’s ambassador David MacNaughton and supported by provincial premiers of all political stripes – with state governors and members of the US Congress, who had in turn demonstrated vocal support for Canada’s inclusion in the negotiations. By the end of September, Canada was back at the table as the United States-Mexico-Canada Agreement (USMCA) was announced as a proposed replacement for NAFTA.

Thirty years ago, enhanced market access to the United States was a risk worth taking for Prime Minster Brian Mulroney. Today, it is a lifeline for the Canadian economy which increasingly relies on supply chain linkages through the United States to reach global markets. Freeland understands this better than many members of the Trudeau government, and has been able to articulate this to Canadians from Bay Street to main street. It was this expertise and talent for communication that Trudeau needed to keep Canadians on his side as Canada’s economic future was called into question by Trump’s revisionist worldview.

In his 1995 book, Trust: The Social Virtues and the Creation of Prosperity Francis Fukuyama identified trust as the essential ingredient for achieving a prosperous economy and for advancing economic integration. President Trump has won the trust of many alienated US citizens who believe that on trade policy and other issues, Trump fights for them.

Former Governor General David Johnston has a new book, Trust: Twenty Ways to Build a Better Country, in which he makes a similar point in a more personal way. Fukuyama sees trust as necessary for capitalism and democracy to function; Johnston argues that leaders and citizens must demonstrate that they are worthy of trust, because there are risks in trying to achieve anything worthwhile, and we will follow leaders we trust even when we are not confident that things will work out for the best.

Chrystia Freeland’s capacity to build a bond of trust across national and partisan divisions is remarkable. Her defence of Canada’s interest in free trade and continued economic integration with the United States, issues that bitterly divided Canadians just 30 years ago, was inspiring.

As I saw when we first met, Chrystia Freeland’s capacity to build a bond of trust across national and partisan divisions is remarkable. Her defence of Canada’s interest in free trade and continued economic integration with the United States, issues that bitterly divided Canadians just 30 years ago, was inspiring. That Freeland prevailed even as the United States imposed tariffs on Canadian softwood, steel, and aluminum and at a time when the White House is occupied by someone many Canadians dislike was historic.

Freeland kept the prime minister and her caucus colleagues behind her policy approach to the United States even when it looked to have failed. Had NAFTA been lost, the Trudeau government may well have fallen, and her political career summarily ended. Freeland’s hard work and social virtues might have prevented the collapse of the North American economy. The admiration of the US establishment for Chrystia Freeland may have irked President Trump but might have renewed Canada’s relationship with the United States for decades to come. Freeland has earned this recognition as the 2018 Policy-Maker of the Year by the Macdonald-Laurier Institute.

Christopher Sands is Senior Research Professor and Director of the Center for Canadian Studies at the Johns Hopkins University’s Paul H. Nitze School of Advanced International Studies. He is also a member of the Research Advisory Board at MLI.