Going Beyond the Bravado on Saudi-Canada Relations: Shuvaloy Majumdar and Taufiq Rahim in the Toronto Sun 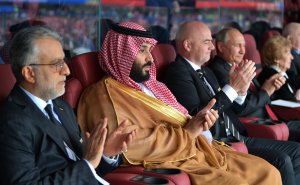 There is no stock template on advancing the cause of human rights. Each country Canada deals with requires a unique approach, pitched toward the best possible path to secure a positive outcome, write Shuvaloy Majumdar and Taufiq Rahim.

An Air Canada jet soars toward the CN Tower with the caption, “Sticking one’s nose where it doesn’t belong.”

The shocking image was clear even if its source – an unofficial account loosely linked to the Saudi government – was not. Official representatives have since apologized and the account deleted, but it goes to demonstrate how this feeding frenzy threatens to spiral out of control.

Recent Canadian diplomacy has hit rough waters when it comes to engagement with the emerging powers of the world. With India, China, and now Saudi Arabia, deteriorating relationships with the key forces shaping the global order are compromising Canadian interests.

In a time of hypernationalism in the Middle East and political division in Canada, escalating tensions with Saudi Arabia may lead to unintended consequences that would be hard to contain. A fallout between two consequential oil-producing G20 countries is not something to be taken lightly. Deliberate diplomacy and even temperament despite rising tensions is the only path to de-escalation.

Since 9/11, Canadian relations with the Kingdom and the Gulf have long wrestled with balancing the pressures of security, trade and values. The emergence of new Saudi leadership even more oriented toward the West in 2015 presented hope for a watershed moment between the two countries. Despite their own misgivings, the Trudeau government quietly maintained course with a multi-billion-dollar military equipment deal agreed to by the previous government, while expressing discontent in various UN forums about the Yemen war – the world’s most acute humanitarian crisis. While there has been consternation on the Saudi side, it did not lead to anything more severe.

Advocacy around the detention of civil society activists, however, has hit a raw nerve. Ensaf Haidar, herself an activist, received asylum in Canada and citizenship this year. Her husband, Raif Badawi, remains in a Saudi prison, and Canada has consistently called for his release over the last two governments. Last week, his American sister, Samar Badawi, a women’s rights activist, was also detained amidst a pattern of similar detentions in Saudi Arabia. Canada decided to take a stand in both online and offline statements, including most sensitively in a tweet in Arabic issued by the Canadian Embassy in Saudi Arabia.

What has ensued is a mixture of opportunistic bandwagoning, and the diplomacy of personal advocacy prevailing over a disciplined plan to realize successful outcomes.

Realistic questions need to be posed: If the objective is to advocate for the rule of law and human rights, how does this collapse of relations accomplish those ends?

Realistic questions need to be posed: If the objective is to advocate for the rule of law and human rights, how does this collapse of relations accomplish those ends? If the objective is to foster pluralism, how is Canada’s relative silence on similar circumstances in Cuba or even Iran consistent? Are we any closer today as a result of these tweets to realizing the release of the Badawis?

While in the short-term, both sides may benefit politically from brow-beating each other before domestic constituencies, it doesn’t appear that anyone truly stands to gain from this in either country. Tens of thousands of Saudi medical students and their patients will see their lives disrupted, while a trading relationship that particularly small businesses depend on will deteriorate. At the same time Canada is not Sweden, who for several years had a similar dustup with Saudi Arabia and have been trying to engage Saudi Arabia since; Canada is a G7 power, fuelled by a dynamic people, and with the capacity to grow its leadership at the global level.

Navigating next steps will require leaders to see the world as it is, not as they wish it were. It is about advancing a Canadian diplomacy that emphasizes results over rhetoric. Given Saudi overreach through its online troll farms (such as the plane infographic) there presents an opening to say: “Things have gone too far.”

Let us be clear on one point. Advancing Canadian interests does not mean apologizing for them. There is no stock template on advancing the cause of human rights. Each country Canada deals with requires a unique approach, pitched toward the best possible path to secure a positive outcome. A marriage of the perfect and the possible.

In the case of Saudi Arabia, if Canada cannot keep the channels of dialogue open, it will end with a foreign policy that may receive retweets online and provide cathartic release, but lacks meaningful and realistic progress on the ground for those for whom it matters most.

Shuvaloy Majumdar is a Munk Senior Fellow for Foreign Policy at the Macdonald Laurier Institute, and Taufiq Rahim is a Canadian political analyst based in the Middle East.