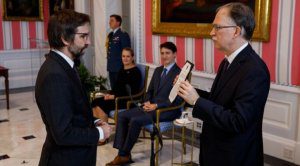 It is time for the government to pause, give Bill C-10 a conceptual rethink, and redraft and sharpen its tools. Fiddling won’t fix it, write Konrad von Fickenstein and Peter Menzies in the Globe and Mail.

By Konrad von Fickenstein and Peter Menzies, May 7, 2021

Controversial government efforts forcing streaming companies to pay into official Canadian culture funds will only gain public acceptance if the legislative club currently being used is replaced with a scalpel.

The main aim of Bill C-10, an Act to Amend the Broadcasting Act, was originally to regulate online streaming companies such as Netflix and to level the playing field between traditional broadcasters and those services. Fair enough, but using the Broadcasting Act and granting the Canadian Radio-television and Telecommunications Commission (CRTC) sweeping powers over the internet is at best an awkward solution, and at worst an unworkable and damaging one. Both the Act and the CRTC were designed to regulate the closed, one-way world of over-the-air broadcasters, cable companies and specialty channels. Their existence is based on the principle that spectrum – the airwaves – is a limited public resource that requires public management in return for its use.

That argument doesn’t, of course, work for the multiple-user, interconnected and infinite world of the internet. The purpose of the Broadcasting Act and the CRTC’s myriad of content regulations has always been to regulate the behaviour of license holders – or, if you will, the gatekeepers of media access. The purpose of the internet was always to ensure the absence of gates and the liberation of the “gate-kept.” Little wonder, then, that Bill C-10′s ham-fisted stifling of that recently gained freedom has inspired such a thunderous public backlash from both marginalized and mainstream groups accustomed to their liberty.

Last month, amendments to the bill removed a section that would have excluded user-generated content from the regulation, causing concern that Canadians uploading personal content would be subject to new oversight. While a new amendment has now been promised, the previous move directly undermined the government’s argument that this legislation is aimed only at streamers.

Heritage Minister Steven Guilbeault should fully retreat and refocus. Fiddling with amendments is not the answer. This legislation requires substantive change. The government should take steps to ensure its ambitions are measured without taking on the problematic task of handcuffing the entire internet.

The legislation or cabinet should direct the CRTC to limit the imposition of conditions to streamers with regulations kept to the minimum required. The requirement for streamers to register as online broadcasting undertakings should apply only to companies that have gross Canadian revenues in excess of, say, $80- to $100-million per year. This is necessary to prevent stifling innovation by new entrants and entrepreneurs.

Only streamers that compete directly with licensed Canadian broadcasters and cable/satellite companies should be required to register. Conditions imposed on online streamers must be structured so as not to enable the U.S. or Mexico to implement “measures of equivalent commercial effect” under the cultural exception of the Canada-United States-Mexico Agreement. Foreign streamers must be treated on the same basis as Canadian streamers. This would mean, for example, that Canadian streamers such as Illico and Crave would have to comply with the same conditions as Netflix or Amazon Prime Video.

If streamers are required to register in Canada, distribute Canadian content and contribute to Canadian production, national treatment requires that they would also have access to funding for Canadian production. Currently, that funding is only available to Canadian-controlled firms and the intellectual property rights to productions must be held by Canadians. Making such benefits also available to foreign streamers for their Canadian content will require further amendments to both the Income Tax Act and the Telefilm Canada Act.

None of the above are easy – and there are other solutions that avoid internet regulation and threats to free expression, such as taxing the companies and directing those dollars into designated funds while lightening the funding burden on cable companies.

The bottom line is that expecting the CRTC to do what Bill C-10 demands will result in years of process, appeals and legal/constitutional challenges that will suppress investment and harm Canada’s creative sector. It is time for the government to pause, give Bill C-10 a conceptual rethink, and redraft and sharpen its tools. Fiddling won’t fix it.

Konrad von Finckenstein is a senior fellow at the C.D. Howe Institute and former chair of the CRTC.

Peter Menzies is a senior fellow at the Macdonald-Laurier Institute and former vice-chair of the CRTC.