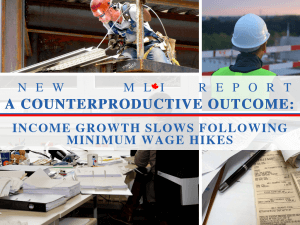 “Overall the hoped-for boost to household incomes did not materialize for several reasons,” writes MLI Munk Senior Fellow and report author Philip Cross. “The number of people affected was relatively small, the increase in wages was confined to those earning the minimum, and employment softened so far this year.”

This quarterly report focuses on how Canada’s labour market has fared in terms of employment figures, wages, and employment insurance claims. The report also seeks to explain why, despite seemingly strong employment numbers, actual labour market conditions are telling a somewhat different story.

While minimum wage increases did positively impact the incomes of workers who kept their jobs, the overall effect of the policy on the labour market has fallen short of proponents’ promises. With slow wage growth, particularly in Ontario following its minimum wage hike, and increases in consumer prices, real income growth has continued to decelerate.

“This is the opposite of what governments intended when they raised minimum wages this year.”

Despite disappointing real income growth figures, Cross finds that overall labour market conditions in Q3 have been fairly mixed – a change from weak and volatile conditions experienced in Canada during Q2. However, with many employment increases originating in the public sector and with increasing EI claims, there is still reason to be skeptical.

Read the MLI Labour Market Report for Q3, 2018 to find out more.