Hong Kong’s autonomy has been tragically destroyed: Nathan Law and Ai-Men Lau in the Star 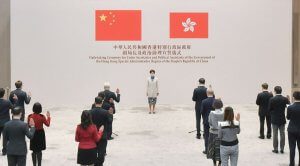 Despite Canada’s national obligations as an endorser to the Sino-British Joint Declaration, the Canadian government has done little to hold Beijing accountable, write Nathan Law and Ai-Men Lau in the Star.

The People’s Republic of China (PRC) has crushed remaining vestiges of Hong Kong’s autonomy with sweeping legislation that transformed semi-democratic elections in the territory to a Beijing-controlled selection process. Despite Canada’s national obligations as an endorser to the Sino-British Joint Declaration, the Canadian government has done little to hold Beijing accountable.

Under the guise of complying with the Basic Law and the Sino-British Joint Declaration, Beijing loyalists enjoy an overwhelming, de facto advantage. Public office nominees will now be vetted by Beijing and there will be pro-Beijing majority in Hong Kong’s legislature. Despite official’s repeated assertions that the latest electoral “reforms” strengthens Hong Kong’s “democracy,” the message is loud and clear: Hong Kong is now fully under Beijing’s control.

The PRC’s latest move is neither sudden nor unexpected. Since the handover from British rule two and a half decades ago, fear of Beijing’s takeover has woven itself into the fabric of Hong Kong. Canada saw a spike in Hong Kong immigrants during the initial handover, as the belief that Hong Kong’s autonomy would swiftly end drove many to leave the territory.

Beijing’s takeover of Hong Kong has been a slow one, with many fighting for the establishment of democracy since the 1980s. The Sino-British Joint Declaration did promise universal suffrage for the people of Hong Kong, but that has never been honoured. Yet, little international attention has been paid to Hong Kong’s fragile institutions and basic law despite being enshrined in the Sino-British Joint Declaration. The warning signs were seemingly shrugged off, as China’s rise to power and economic might captured the world.

The Canadian federal government’s silence has been harrowing for many Hong Kong-Canadians. As homes, city streets, and favourite haunts in their homeland were morphed into scenes of blood, tear gas, and police brutality, mounting frustration and calls for actions tore through the Hong Kong-Canadian community.

Ottawa belatedly shifted its approach on this issue. After the implementation of the National Security Law (NSL), the federal government suspended its extradition treaty with Hong Kong and banned the export of sensitive military technology to the territory. In November 2020, the Canadian government launched new immigration measures for Hong Kong students and youth. However, these immigration pathways do little for those fleeing danger, and many activists have called for further measures to help Hong Kongers fleeing political persecution.

While Beijing was predictably incensed, none of these measures effectively deterred China’s actions. Rather, the PRC was only emboldened to continue its suppression of the territory, breaching international agreements in the process. This has continued with impunity.

The federal government has recently announced sanctions, in conjunction with the U.S., the U.K., and the EU, on four Chinese officials and one Chinese entity for their complicity in crimes against humanity in the Xinjiang Uyghur Autonomous region. Sanctions would send a message to the Chinese regime that their actions in Hong Kong are unacceptable, yet there are no indications of such sanctions against Chinese and Hong Kong officials for their role in the crackdown on Hong Kong.

While sanctions would be a welcomed first step in addressing the PRC’s authoritarian dismantlement of Hong Kong’s autonomy, it does not address foreign interference within Canadian institutions.

Minister of Innovation, Science and Industry, François-Philippe Champagne, has recently unveiled revised guidelines scrutinizing foreign takeovers and investments, but more should be done to examine how state-funded or affiliated Beijing-influence campaigns operate in all sectors. Measures need to tackle political and elite capture, Beijing’s disinformation operations, and their infiltration into academia, non-profit and business sectors.

Addressing foreign interference is another critical measure, not only to safeguard Canadian interests but Canadian citizens themselves. As Beijing continues to muzzle political dissent and critics, no one is beyond the reach of Beijing.

In Canada, pro-democracy Canadian-Hong Kongers and other dissidents have been physically assaulted, intimidated and harassed. Communities often self-censor out of fear for retribution. Even more heartbreaking, Canadian Hong-Kongers do not feel safe here in Canada, a home that was once thought to be a haven for those seeking freedom.

Democracy was a cherished dream in Hong Kong. Over the years, we have seen the repeated efforts of activists, lawmakers, colleagues, friends, and loved ones fight to save the Hong Kong they love. We cannot let their efforts go in vain.

Nathan Law is an activist in exile, is the former leader of the pro-democracy party Demosistō, and MLI’s Ambassador on Canada-Hong Kong policy.

Ai-Men Lau is a communications officer at the Macdonald-Laurier Institute.