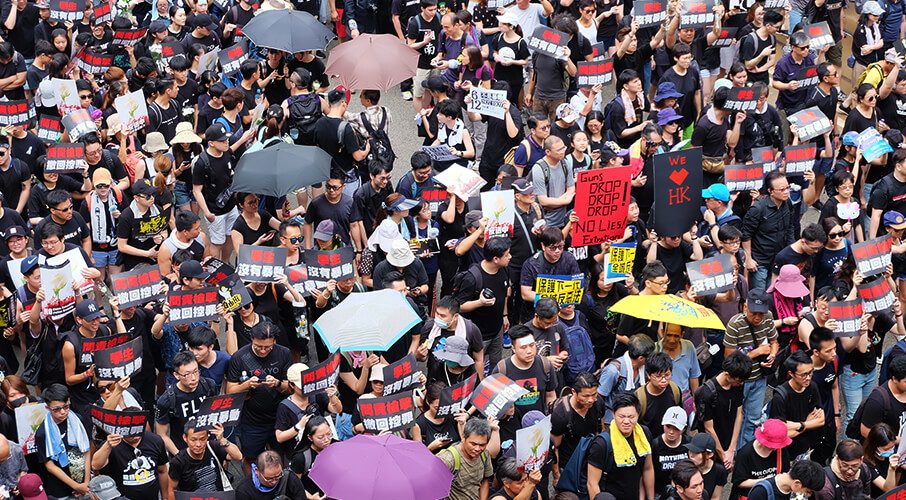 Calling the Sino-British agreement void and repeated attempts to compel love from Hongkongers have only led to resentment and hate, writes Amy Lai.

Some people cannot imagine a world without love. One might argue that what is more essential to a society is the rule of law – laws based on the principles of justice. Love may be spontaneous and fleeting, but citizens whose liberties are protected by law can live in peace, security and with dignity. Laws can be enforced; love cannot.

In 2012, the Hong Kong government sought to introduce Chinese  civic education into its public school curriculum as an attempt to inculcate love and respect in Hong Kong youth for their “motherland.” The pro-China curriculum included statements that lauded China’s ruling party and criticised multiparty systems, while making no mention of major events in China’s history, like the Tiananmen massacre.

Amid massive protests, the plan was shelved. More recently, the government has set out to implement a national anthem law, making it a crime to disrespect the Chinese anthem (for example, by parodying it), or not to stand solemnly when it is being played in public. In the name of patriotism, freedom of speech – the foundation of civil society – was disregarded.

China might have been able to earn Hongkongers’ respect if it had honoured the rule of law and its handover agreement with Britain. In time, respect might have blossomed into love. But calling the Sino-British agreement void and repeated attempts to compel love from Hongkongers have only led to resentment and hate.

Unfortunately, the government has not learned from its mistakes. During a televised interview on June 12, immediately after Hong Kong police had used violence against largely peaceful protesters, Chief Executive Carrie Lam Cheng Yuet-ngor used a mother-child analogy to describe the government’s relationship with the people.

The message was clear: the prodigal child should obey the loving mother and love her back. Hong Kong people, who remember that Lam was a civil servant, did not buy this cheap and deeply ironic analogy. Reports have also claimed that Lam asked her two sons, working outside Hong Kong, not to come back because it was unsafe.

She has since turned a deaf ear to protesters’ requests and allowed police to use additional force against other people’s children as the protests continued past the point of no return.

Beijing’s efforts to engineer love have apparently worked with young mainlanders. Mainland netizens have bemoaned the unruly conduct of Hong Kong’s youth, whom they claim are taught to hate China. Mainland children, on the other hand, are taught to love their nation at a young age, they say. Hence, they continue to spread their love of China while studying abroad and defend its integrity whenever they find it under attack.

On some Western campuses, Hong Kong student rallies in solidarity with protesters have been met with violence – both verbal and physical – from mainland Chinese students, who did not so much organise counter-protests as appropriate their newfound freedom of speech to quash the peaceful messages. The Chinese Consulate in New Zealand, for example, praised such conduct, claiming that it was borne out of their “love of China and Hong Kong.”

Yet the phenomenon may go beyond brainwashing. Compelling love in citizens creates not only resentment and fear, but also hypocrites who act only because they seek personal gain. Some mainland Chinese who bullied the protesters may have intended to show their “virtue” to their government and score social credit points, as they plan to return to China.

Those with no plans to return may have done so for their family members back home. As for those with Western citizenship, who profess undying love for China and sing the national anthem, they may be seeking to export Chinese authoritarianism to Western countries under the guise of love.

Hongkongers appreciate the complexity and grace of the traditional characters, some of which are pictographical and resemble the things they refer to. Indeed, to many, love springs from the heart – or else it is fake.

Such peculiar facts about the character systems are likely unique to China and Hong Kong. Compelled love, and authoritarianism masquerading as love, are perhaps not. Many Western nations should take note.

Amy Lai, a lawyer, was educated at Cambridge University and the University of British Columbia. She is a frequent MLI author and contributor.