How Equalization Failed Alberta in its Time of Need and How to Fix It: New Joint MLI-IIGR report by Thomas and Teresa Courchene 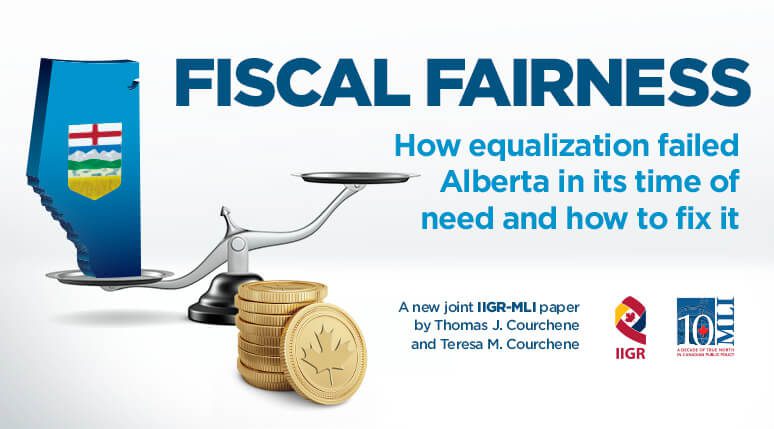 OTTAWA, ON (April 16, 2020): The COVID-19 pandemic will have a severe economic impact on Canada. However, given the current glut of oil supply, Alberta’s economy will be hit especially hard. Despite this, Alberta will still not receive any equalization payments as the current equalization formula deems Alberta to be a “rich” province.

In a joint report between the Institute of Intergovernmental Relations in the School of Policy Studies at Queen’s University and MLI titled “Fiscal Fairness: How Equalization Failed Alberta in its Time of Need and How to Fix It,” authors Thomas J. Courchene and Teresa M. Courchene examine the problems inherent in the current equalization formula and the solutions that are on the table to correct the imbalance facing Alberta.

According to the authors, Alberta does not qualify for equalization payments due to the underpinning mechanics of the equalization formula. The key assumptions and features of this formula could end up being detrimental to national unity in Canada, especially given rising Western separatist sentiment.

“There has been a growing perception that Canada’s equalization program is broken, especially for Alberta,” write Thomas and Teresa Courchene. “And with good reason.”

In particular, the data entering into the equalization formula are three-year moving averages of provincial per-capita revenues calculated with a two-year lag. This means that the most recent provincial revenues are excluded from the equalization calculation. As a result, Alberta’s revenues for equalization purposes were much higher than its actual revenues as they did not reflect the impact of the ongoing collapse in energy prices.

Another issue is that under the current equalization formula Alberta is assumed to be levying a sales tax, even though no such tax exists in Alberta. This discrepancy effectively pushes Alberta into the “rich” province category.

While Ottawa’s Fiscal Stabilization Program is designed to offset these imbalances, the authors find that the program is woefully inadequate.

“Alberta’s cumulative shortfall in own-source revenues from 2014-15 levels in the subsequent five years amounted to almost $25 billion, whereas Alberta’s cumulative fiscal offset from Ottawa under the Fiscal Stabilization Program was only $503 million,” explain the authors. “Surely there is a convincing case to be made that Canada is dramatically underfunding provincial revenue collapses.”

So, what should Canada do about the current equalization formula and its challenges? Thomas and Teresa Courchene offer the following recommendations for the federal government:

Thomas J. Courchene has authored/edited several hundred publications across a wide range of Canadian public policy areas and is the recipient of numerous awards, including two Donner Prizes, one in 1998 and one in 2019 for his book “Indigenous Nationals, Canadian Citizens.” He also received the Canada Council Molson Prize for lifetime achievement in the social sciences in 2000. He is Professor Emeritus at Queen’s University and was the founding director of Queen’s School of Policy Studies.

Teresa M. Courchene has served as the Director of Economic Research at TD Bank. She has spent the last 15 years focused on teaching and research in the areas of early years’ learning, mathematics and financial literacy. Teri currently teaches investing at the University of Toronto School of Continuing Studies.