If not for Tupper, Canada would have been scuppered: Alastair Gillespie in The Chronicle Herald 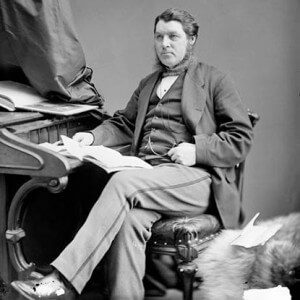 This Canada Day, Canadians should thank Charles Tupper, who, on the first anniversary of Confederation, was fighting to keep Nova Scotia in Canada against a populist uprising, writes Alastair Gillespie.

Charles Tupper’s leadership teaches lessons about the tension between political leadership and the popular will — a perennial issue still with us today.

As premier, Tupper took Nova Scotia into Canada backed by resolutions passed in Nova Scotia’s legislature. Fresh elections could sweep him from power, as happened to New Brunswick’s Samuel Tilley in 1865, and threaten Confederation.

The elections of 1867 were a blow to national unity. Almost all the new Nova Scotia legislature supported a repeal of Confederation, and Tupper, who had begun a new career on the federal scene, was the sole pro-Confederation Nova Scotian elected to the federal Parliament.

Joseph Howe led the popular resistance to Confederation, and has arguably been rewarded with greater profile in modern memory. Howe, not Tupper, is honoured with a statue at Province House in Halifax. Howe’s insistence on popular approval of a new constitution sits better with modern sensibilities, and his memory is burnished with the pathos of a lost cause.

Meeting his foe in Parliament, Tupper insisted the test of leadership demanded more than following popular will. “Sir, the government of which I had the honour to be leader believed that they owed a higher duty to the country than the maintenance of themselves and their party in power.”

Tupper believed that Nova Scotia’s entry into Confederation was legitimate, that the system of responsible government meant he could act with the support of the people’s representatives in Parliament. Majorities came and went, but Confederation was the right thing to do.

“I, Sir, have from the first hour of my public life been an ardent advocate of the Union of British North America under one government,” Tupper declared. He warned that Nova Scotians should not be misled by self-interested politicians whipping up popular emotion to ride back into power.

Tupper and John A. Macdonald worked to mollify Howe and reach better terms with Nova Scotia. Howe entered the federal cabinet in 1869, and fought and won an election with Tupper by his side. Leaving Ottawa to become lieutenant-governor in Halifax, Howe told supporters to stand by Tupper, as Tupper had stood by him. Howe had just weeks to live.

Reflecting on Tupper’s leadership, Thomas D’Arcy McGee told Parliament the night of his assassination that he hoped popularity would never be the test of public service in Canada. We should honour the leader “ready to meet and stem the tide of temporary unpopularity, who is prepared … to sacrifice himself in defence of the principles which he has adopted as those of truth.”

Current events give fresh resonance to this parable of Canadian leadership. In 2018, populism is all around — its better angels keeping government close to the people, its darker spirits appealing to the passions to seek power and divide communities.

Nineteenth-century standards should not be applied to constitution-making today. But Canadians and Nova Scotians still admire and respect leaders who actually lead, and sometimes even those who appeal to our better angels.

Joseph Howe will always be the tribune of Nova Scotia — but the question should be asked whether his statue at Province House should be twinned with one of Charles Tupper. Our country exists because of Tupper’s leadership — all of Canada is his monument.

Alastair Gillespie is a Canadian lawyer living in London, England, a Munk senior fellow at the Macdonald-Laurier Institute, and author of the five-part Confederation series available here.