LNG deal shows benefits of working with First Nations: Gale and Coates for Inside Policy 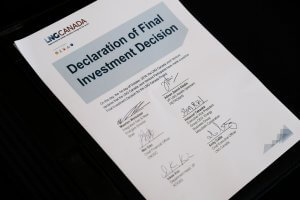 Many First Nations communities want the opportunity to get more involved in the natural resource economy, write Sharleen Gale and Ken Coates

It is important to recall all the stories attributing the delays in the Trans Mountain Pipeline, the collapse of the Enbridge Northern Gateway project, and the general malaise in the natural resource economy to Indigenous resistance. The symbolism of Indigenous protest has been too powerful for most commentators to pass up. It suited urban assumptions about Indigenous attitudes to development.

But it was not uniformly true in the past. And it is far from true now.

Witness the recent announcement that the consortium LNG Canada will proceed with construction of its $40 billion pipeline and processing facility in northern British Columbia.  The loud rumbling from out West is the sound of an embattled energy sector celebrating the first bold sign in a few years that the country is willing to further unlock its natural resource wealth.

LNG Canada is not going it alone. They have been working, with little fanfare, to bring Indigenous communities on board. And they are there. All of the Indigenous communities along the pipeline route have agreed to the project, with the now-standard assurances of employment, business and other opportunities in return for their support and collaboration.  The Haisla, in whose homeland the Kitimat terminal will be built, have long advocated for the natural gas pipeline and refinery project, and stand to benefit substantially from the economic activity.

In the absence of resource and infrastructure development, there are precious few opportunities for wealth and job creation in Indigenous communities. The only alternative on offer – a continuation of the intrusive and unreliable welfare economy the Government of Canada has constructed and maintained over the past 60 years – is simply not acceptable.

Indigenous people are not slavish or uncritical supporters of resource development. Negotiators for governments and major companies can attest that Indigenous peoples drive a hard bargain, with firm requirements for environmental protection and appropriate assurances of a decent return to the communities. They pushed back against Northern Gateway and looked cautiously at earlier plans for LNG projects. But the First Nations kept listening and they kept talking.

That so many First Nations have signed on with the pipeline does not mean that the LNG Canada project will proceed without criticism. Environmentalists have already challenged the corporate and government decisions and have threatened legal action and demanded more environmental assessments. First Nations and non-Indigenous leaders in northern British Columbia have asked them to back off and to trust the local communities to look after the region’s best regions. Some critics claim that the agreements with band governments do not reflect support from hereditary Chiefs, raising another level of political complexity and argument.

First Nations also want the opportunity to get even more involved. Many communities would like to be partial owners of the pipeline and believe that an equity investment would produce even better long-term returns to the North. Unfortunately, the Government of Canada has not yet worked out financial systems that will, on a proper business case foundation, permit Indigenous communities to expand their investments and build real wealth. Watch for further developments in this area in the years to come.

It is hard to over-estimate the significance of this decision. The LNG Canada project is massive, promising tens of thousands of jobs and flow-on business opportunities that will reverberate across the country. LNG Canada’s commitment to the Canadian natural gas sector is invaluable for many reasons. But perhaps the most significant is the company’s ability to build support among First Nations and the First Nations’ determination to be part of the natural resource economy.

First Nations have been left out of their share of Canadian prosperity for generations. The legal battles that resulted in “duty to consult and accommodate” decisions were intended to create space for First Nations in the Canadian economy. LNG Canada is not the first barrier-busting project, but is the largest. Even better, particularly in the face of the protests over Trans Mountain pipeline, the LNG Canada initiative makes it clear that First Nations are prepared, when the conditions are right, to become true partners in charting the future of the Canadian economy.

If the current trajectory holds, and building on some 15 years of ever closer collaboration between industry and Indigenous peoples, LNG Canada’s arrangement is going to become the “new normal.”  First Nations will ensure environmental standards are protected. They will ensure that local residents get a better deal out of resource projects. And Canada will make a fundamental shift that brings Indigenous communities into positions of authority, partnership and wealth generation. This is the economic future that First Nations deserve.

Sharleen Gale is a Dene woman who serves on council for Fort Nelson First Nation in northeastern BC. She is chair of the First Nations Major Projects Coalition. Ken Coates is a Munk Senior Fellow with the Macdonald-Laurier Institute.

(Image credit: Province of BC)