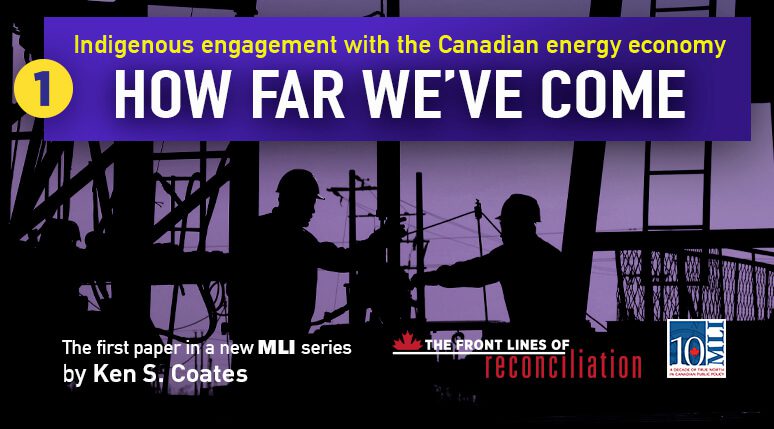 OTTAWA, ON (August 5, 2020): The Supreme Court of Canada recently dismissed a legal challenge by a small group of First Nations in BC aimed at stopping the TMX pipeline expansion. In so doing, they sent an important signal about the long-term viability of the oil and gas industry in Canada. However, it would be a mistake to describe Indigenous peoples as being a significant threat to Canada’s energy sector.

The truth of the matter is that Canada’s oil and gas industry depends heavily on relationships with Indigenous peoples. In a new MLI publication titled “How far we've come: Indigenous engagement with the Canadian energy economy,” MLI Munk Senior Fellow Ken Coates delves into the engagement of Indigenous peoples in the energy industry. This is the first paper in a new series on “The Frontlines of Reconciliation.”

“The results of the meaningful inclusion of Aboriginal communities in the oil and gas sector are clear,” explains Coates. “The oil and gas industry now has substantial Indigenous participation. The income levels for these workers are significantly higher than the Canadian average, not just for Indigenous worker, but for all workers.”

According to Coates, Canada’s beleaguered energy sector faces a multitude of challenges such as the contentious Bill C-69, the banning of west coast tanker traffic, and the closure of Arctic oil and gas exploration. In addition, global geopolitical and economic issues badly damaged the industry in early 2020.

“The Canadian oil and gas sector does not exist in isolation,” says Coates. The oil and gas sector was on a generally positive path as emissions associated with oil and gas production were being addressed and opportunities for Indigenous peoples were improving. But a combination of federal policies and global forces have reined in, if not reversed, these positive developments.

Coates notes that Indigenous communities are becoming increasingly willing to defend the industry and make large equity investments in oil and gas. External forces, particularly environmental criticism, regulatory turmoil, and uncertainty about the government of Canada’s priorities, are a much greater threat to the future of the industry than Indigenous communities and governments.

“It would be sadly ironic if the government of Canada’s position on one core element of its policy program, fighting climate change, was to undercut promising development in inclusive economic growth and the transition of Indigenous communities from the margins to the centre of the Canadian economy,” says Coates.

Ken S. Coates is MLI’s Munk Senior Fellow in Aboriginal and Northern Canadian Issues. He is the Canada Research Chair in Regional Innovation in the Johnson-Shoyama Graduate School of Public Policy at the University of Saskatchewan. He has served at universities across Canada and at the University of Waikato (New Zealand), an institution known internationally for its work on Indigenous affairs.