Indigenous issues fade in the election, but can a consensus emerge? Ken Coates for Inside Policy 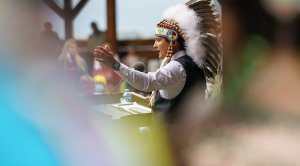 Given the national uproar over residential schools just a few weeks ago, it’s disappointing to many that Indigenous issues have largely fallen off the agenda. But perhaps there is potential for a less partisan and more constructive approach, writes Ken Coates.

In the months leading up to the 2021 election, Indigenous issues dominated the national news.  The discussion about the unmarked graves near Canadian residential schools raised the profile of Indigenous issues to the front line of Canadian politics.  After the writ was dropped, many Canadians had good reasons for believing Indigenous issues would feature prominently in the subsequent election campaign.

It is not that the party leaders and their parties have completely ignored Indigenous issues.  All have significant program sections committing to reconciliation and “new” approaches to relations with First Nations, Métis, and Inuit.  The Liberal approach has been established. The Trudeau government has already expanded greatly the financial support to Indigenous affairs, reached numerous agreements with Indigenous communities and governments, and made an exceptional list of promises to Indigenous peoples.

The Conservatives have an economy-building set of priorities, including a large investment capital fund, and a promise of $1 billion for Indigenous mental health.  The New Democratic Party platform includes a wide array of promises, including commitments to the United Nations Declaration on the Rights of Indigenous Peoples and the Truth and Reconciliation Commission, although the list is not balanced by a sense of realism and the government’s capacity to pay.  The Green Party has a short list of commitments that do not venture off safe ground and that highlight promises of renewable energy investments in Indigenous communities.  The People’s Party of Canada critiques the Indian Act, and favours greater accountability and a review of the effectiveness of government spending.

While there are differences in priority and some program variations, there is remarkable agreement on most elements.  Reconciliation features prominently in all plans.  The role of government is pronounced, even in the Conservative plan, and the Liberal pattern of assuming federal responsibility for Indigenous challenges can be found in most platforms.  The parties agree that Indigenous peoples should be full partners in the development of new plans, priorities, and programs.  The platforms emphasize the importance of economic development, most prominently in the case of the Conservatives, and there is general recognition of the nation’s failure to provide adequate infrastructure (especially housing and water) for the reserves.

Even still, Indigenous people have shown much the same lack of interest in the 2021 federal election as most Canadians.  Many are still engaged in the challenging task of protecting their communities from the still surging pandemic. Others, frustrated by the pattern of Liberal over-promising and under-delivering, have adopted a “show-me” attitude to the Government of Canada.  While there is an historic pattern of strong Indigenous support for the Liberal Party of Canada, that engagement is not assured.  Nor is it clear that the higher levels of Indigenous voting experienced in 2015 will re-emerge in 2021.  There are more than 75 Indigenous candidates running for the political parties, most in northern ridings with substantial Indigenous populations.

Indeed, outside the media, the public reaction to issues impacting Indigenous people has been largely muted. A September 2021 Leger poll surveyed potential voters about their most important issues.  Indigenous reconciliation rated 12th out of 14, above childcare and immigration but immediately below pharmacare and government debt.  Liberal supporters ranked Indigenous issues second from the bottom; Bloc Québécois supporters, in sharp contrast, rated reconciliation as their top priority, above pharmacare and the cost of living.  Only 2.4 percent of Conservative respondents flagged Indigenous issues as the top issue, lowest of all topics. The NDP placed reconciliation marginally higher on the agenda (5.5 percent).

As the Leger poll suggests, and as the public speeches of the party leaders demonstrate, the nation’s attention is focused on other issues, such as the cost of living, health care, economic recovery, and the pandemic.  In an ordinary election, these results would be unsurprising.  In the aftermath of a genuinely national outpouring of dismay over the unmarked graves, having Indigenous affairs attract such limited attention is as unexpected as it is disappointing.

Indigenous people are probably not surprised, for the transition from public rhetoric to national action on Indigenous issues is simply the standard pattern.  Whereas in the past, Indigenous leaders focused on attracting attention to Indigenous issues, 2021 has seen more assertive Indigenous proposals.  The new National Chief of the Assembly of First Nations, RoseAnne Archibald, released a platform calling for greater attention to reconciliation, climate change and conservation, a commitment to Indigenous economic growth, prosperity and wealth building, greater respect for First Nations’ jurisdiction, and support for rebuilding the autonomy and self-determination of First Nations.

Indigenous policy-makers promote – and expect – a rapid response on a wide range of files, from major justice reforms to the expansion of Indigenous business, wide-ranging economic development measures, and systematic attention to Indigenous and treaty rights.

Indigenous rights, autonomy and aspiration are complex matters.  Furthermore, many First Nations, Inuit and Métis communities and governments across the country vary widely in their circumstances, approaches, and expectations.  Anyone anticipating a simple, one-size fits all approach to Indigenous policy simply underestimates the nuances of Indigenous affairs in Canada and is looking for a solution that will not be readily found.

National political parties have, in the 2021 federal election, shown remarkable consensus on the broad contours of Indigenous policies and have clearly, and thankfully, shown a desire not to make Indigenous affairs into a partisan issue.  There is an implicit realization, it appears, that Indigenous affairs is now on a different political plane in Canada, rather like the management of the Quebec-federal relationship.  Exploiting Indigenous issues for partisan political advantage has, fortunately, been pushed into the background.

The 2021 election is no doubt disappointing Indigenous peoples, much as it is disappointing the country at large for its lack of substance, meaning and vision.  But there are reasons for optimism.  Indigenous issues are clearly on the national agenda in a positive and constructive way.  Indigenous voices are being heard and respected.  The major political parties have made Indigenous affairs a clear priority without adopting partisan approaches.

Oddly, in an election that has no meaning, the country may have turned a corner on the national approach to Indigenous affairs.  The proof will emerge only after the election and with the early actions of the next government.  One hopes, of course, that this will represent the launch of a new, collaborative, and productive relationship between the Government of Canada and the First Nations, Métis and Inuit in the country.

Indigenous people, one feels, want to know that the emotional reaction to the unmarked graves unleashed a real and sustained commitment to overcoming the past, responding to the present and improving conditions in the future. First Nations, Inuit, and Métis people may not benefit from major policy debates on Indigenous affairs in the federal election, but at least these issues are being taken seriously, so much so that they are perhaps rising above the partisan arena.