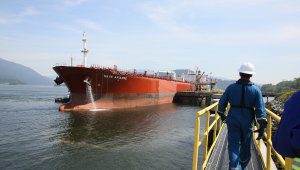 There is no way to reduce poverty and improve self-determination without economic development, writes Stephen Buffalo.

When Bill C-48, the proposed oil-tanker ban for northern B.C., has its third reading in the Senate in the coming days, Indigenous senators can play an important role in finding a compromise on the legislation so that First Nations across Western Canada can develop their economies and nations.

It is certainly no secret that many First Nations oppose the bill. Many First Nations across Western Canada, including members of the Indian Resource Council (IRC), have publicly spoken out against Bill C-48.

IRC is an advocacy organization of First Nations working for greater control and management of their natural resources.

Several First Nations expressed their strong concerns about this legislation in Ottawa on March 20 to the Standing Senate Committee on Transport and Communications and had a chance to meet privately with many Indigenous senators at a non-partisan luncheon hosted by Alberta Senator Patti LaBoucane-Benson. These First Nations were encouraged by LaBoucane-Benson’s sentiment that economic development is required to reduce the many social problems faced by our Indigenous communities, not least those outlined in the Missing and Murdered Indigenous Women and Girls report released last week.  As we know, poverty and hopelessness drive many of these problems.

Many of these Indigenous senators share a belief common among many of their Senate colleagues that the upper house should be reluctant to overturn the elected government’s legislation. However, C-48 was conceived during the 2015 election and subsequently introduced without consulting any of IRC’s member nations, nor those communities who came together to form the Aboriginal Equity Partnership, thus breaking a core principle in the first instance. The partnership is a group of 31 First Nations and Métis communities who support the Northern Gateway project. They believed this federal government did not adequately consult them about these energy projects.

This legislation is complicated by the fact that the First Nations in the southern part of the tanker-ban moratorium area have a different perspective from those in the northern part of the moratorium area. So, if these Indigenous senators are unwilling to outright reject C-48, then they should do everything in their power to improve it, for example by allowing a corridor through those northern areas, so that it is not so damaging to the economic prospects of those Indigenous communities who do want development.

There is no way to reduce poverty and improve self-determination without economic development. For many — maybe most — First Nations, their best opportunity to make real economic progress is through resource development. Bill C-48 takes that away from dozens of communities across Western Canada. For some, they will miss out on the direct jobs that a pipeline and a port in northwest British Columbia would bring. For others, the lack of pipeline access in this country means that there is less investment in exploration and drilling on First Nations territory (capital leaves our lands first, as the royalties are higher than elsewhere), lower prices for the production that is already occurring on our lands, fewer well-paying jobs and fewer own-source revenues.

This is not political for First Nations. This is about the fundamental right to a livelihood, and the hope and well being that economic development and employment can bring.

These Indigenous senators are in a unique position to advocate for Indigenous rights and find some compromise so that this bill doesn’t wipe out the economic progress many of us have been working so hard towards. They must either reject or amend Bill C-48.

Stephen Buffalo is a member of Alberta’s Samson Cree Nation, is a new senior fellow with the Macdonald-Laurier Institute and president of the Indian Resource Council (IRC).