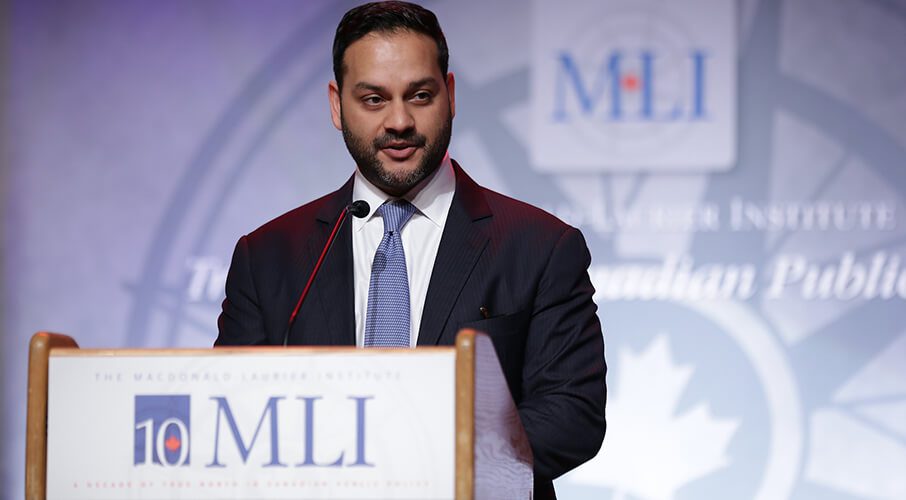 For Canada to be successful, we ignore the Indo-Pacific region at our peril, and we must think differently about our ambition in it, explains Shuvaloy Majumdar.

This article is based on Shuvaloy Majumdar's talk delivered at MLI’s annual dinner on February 19, 2020.

We are experiencing a world of strategic competition in the aftermath of this century’s first wars in Iraq and Afghanistan, and in the aftermath of 2009’s calamitous global economic recession. In this world reorder, three primary disruptions can be seen across all elements of geopolitical life.

In the tests of these disruptions, Canada cannot afford to make grave strategic errors that forsake our national interests. It is an essential undertaking that my colleagues here at the Macdonald-Laurier Institute have begun as we bring to life the Centre for Advancing Canada’s Interests Abroad.

And so what are the interests of Canada in this era of global disorder? How should we think about a Canadian foreign policy doctrine?

Security, prosperity and values. And in that order.

Just as the end of the Cold War was the defining geopolitical reality of the 1990s and early 2000s, so too will the shift of the planet’s economic centre of gravity from the Atlantic to the Pacific define this decade and beyond. It brings us to the theme of our annual dinner, of the Indo-Pacific Region and this crucible of the new world order.

It is a theme that Canada’s foreign affairs officials are contemplating deeply, as they conduct a review of our position in the region and prepare their recommendations to the government later this year. Many of those colleagues who serve our country abroad are here today – welcome, and thank you for being part of this important event.

The transatlantic architecture of the past half century could serve as a roadmap for what a transpacific one would look like today. In advancing our security, our prosperity and our values, Canadians have a proud legacy in shaping the last 70 years of economic and geopolitical life.

In the last 70 years, through decolonization and Cold Wars, through proxy wars and state-backed terrorism, through recessions, famines and massive global and urban migration, this transatlantic architecture has undeniably underpinned the greatest period of human progress in history.

Resulting today, right now, in the rise of the Indo-Pacific, and all it portends for Canada and for a needed update to global diplomacy and alliance building.

It would be tempting to just copy and paste, or replicate, this architecture for the emerging Indo-Pacific. So much of our national academic life, our senior civil service, our national commentary is based on this transatlantic tradition, at times, at the expense of our status as a Pacific nation.

For Canada to be successful, we ignore the Indo-Pacific region at our peril, and we must think differently about our ambition in it.

Behind the curtain of every conversation in this region is the profoundly important strategic challenge posed by the rise of China, against the norms of democratic free market prosperity that the transatlantic community first arose to defend. For all of China’s much-vaunted economic progress following the Deng Xiaoping reforms of the 1980s, much of its economy still remains closed, state-driven, and statistically opaque — a trend explicitly intended to continue under the regressive autocracy of President Xi Jinping.

A third of all economic growth now occurs in the Pacific region where half of humanity dwells, inspiring the International Monetary Fund to declare it “the most important engine of global growth.”

This growth will see many Vancouvers and Torontos emerge across the Indo-Pacific in the coming decades, and those cities will need arterial ports, roads, air corridors and critical infrastructure.

This industrialization, the principal source for global pollution, is one in which Canada can make a real difference – in both global energy security, and in materially lowering emissions. This growth ought to be fueled by Canada’s natural gas, our petroleum, our nuclear and renewable technologies, displacing both unstable regimes and older, higher emissions technologies.

The alliance building among the Indo Pacific’s democracies demand not only our attention, but our active participation.

As the world continues to experience these transformative changes, I would argue that our history of shaping the transatlantic order of the postwar era, has indeed prepared us well for the Indo-Pacific era before us.

Because we are both an Atlantic and a Pacific nation.

Because we are the inheritance of the political heritage from an old era, and the diverse home of people who hail from the new era.

The time is now for the conversation in our national capital to be as much about the Indo-Pacific as it has been about the transatlantic, accompanied with the big ideas and essential solutions for how Canadians can shape the events that future generations will inherit.

So that on the Macdonald Laurier Institute’s 50th annual forum, we can look back on these times, and be grateful for the conversations that were commenced today.

So thank you all for taking the time tonight to be part of this, and thank you to all we are about to hear from, as you help guide our deliberations tonight.

Shuvaloy Majumdar is program director at the MLI’s Centre for Advancing Canada’s Interests Abroad and a Munk senior fellow.