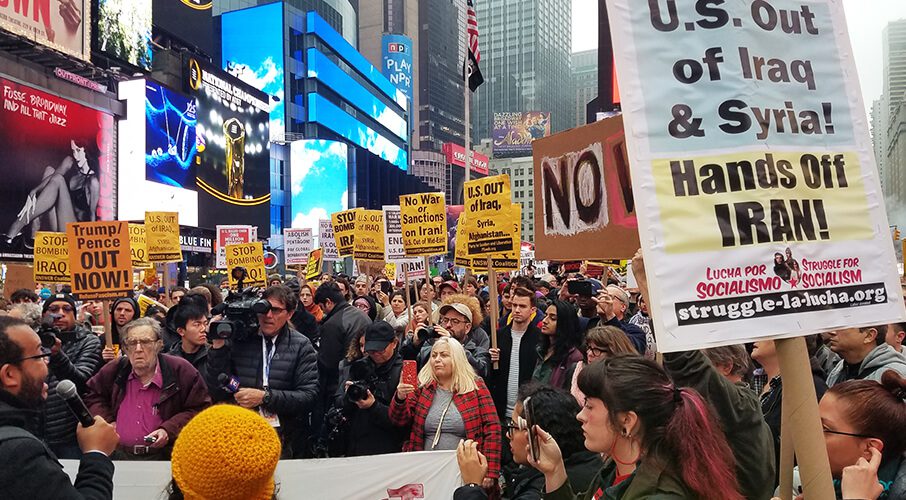 It is true that war brings out the blinkered jingoism of the right. But it also brings out the inverted racism that has emerged as a by-product from the combination of Marxism and social-justice ideology that now constitutes the house creed of online progressive activism, writes Kaveh Shahrooz.

The last Shah of Iran, ousted by revolution in 1979, often warned of “the accursed alliance of the red and the black” that threatened his country. By this he meant the union between the radical left and Islamist reactionaries, two ideological camps that, in theory, should have little common ground.

My family, which had leftist leanings and opposed the monarchy, left Iran when I was young. I have never had a taste for monarchy, either in my native Iran nor my adopted country of Canada, and am not usually fond of quoting the Shah, a monarch who ruled Iran as an imperial state. But in recent days, as I’ve observed reactions to the assassination of Islamic Revolutionary Guard Corps (IRGC) leader Qassem Soleimani, I must admit that, when it came to red and black, the Shah was quite astute. And it will be interesting to see which side Western leftists support now that there is a real threat of regional war.

Soleimani was killed in Baghdad by a U.S. drone strike on January 3. Since the Iranian Revolution, he had served in various military roles, ending with a nearly two-decade tenure as top commander of Iran’s Quds force, a sub-unit of the IRGC specializing in extra-territorial and “unconventional” warfare. As commander, Soleimani was directly or indirectly responsible for a wide range of brutalities, including the provision of support to Syrian leader Bashar Assad during that country’s ongoing civil war—which, according to the Syrian Observatory for Human Rights, has killed nearly 600,000 people. The Iranian dictatorship was never put out by the body count, because it operated on the stated premise that, as one Iranian cleric put it, “if we lose Syria, we cannot keep Tehran.”

The enraged public reaction to the killing of Soleimani in Tehran, Beirut and Baghdad was predictable. What was more surprising—at least to those unschooled in that “accursed alliance”—was the manner by which many Western leftists repeated the Ayatollah's talking points.

Fresh from her junket to Iran, the national co-director of CodePink, “a women-led grassroots organization working to end U.S. wars and militarism, support peace and human rights initiatives, and redirect our tax dollars into healthcare, education, green jobs and other life-affirming programs,” called Soleimani a “national hero.” Rania Khalek, a Lebanese-American contributor to leftist publications such as The Nation, Salon and AlterNet, and herself a recent state-approved visitor to Assad’s Syria, equated the killing of Soleimani with “Iran taking out Abraham Lincoln, George Washington and Captain America all in one.” Actress Rose McGowan, a voluble advocate for progressive causes, posted a bizarre tweet in which she apologized to Iran (whose pre-revolution flag she reproduced with emojis), and called the United States government “a terrorist regime.” Fellow actress Sharon Stone sent out a video of a massive funeral procession for Soleimani, along with the deadpan line “What do u think of this?” Former NFL quarterback Colin Kaepernick, an activist best known for kneeling during the U.S. national anthem in protest of police brutality, explained how such brutality was linked to American militarism, as they both are about the “sanction[ing] and besieg[ing of] Black and Brown bodies.”

Of course, reasonable people can debate whether Donald Trump was correct to order the execution of Soleimani (not to mention the men who died in the same drone attack near Baghdad’s international airport, including Jamal Jaafar Ibrahimi, an Iraqi militia commander). But it is strange to denounce America without considering Soleimani’s involvement in mass murder all over the region—including in Iran itself, where the IRGC helped quell a recent mass rebellion in which about 1,500 protesters are believed to have died. Moreover, how many of America’s critics could explain why Soleimani was in Iraq at the time he was killed? For months, Iraqi citizens had been protesting against Iranian control of their country. Did the “Brown bodies” that Kaepernick tweeted about include the Syrian children, Iranian dissidents and Iraqi opposition figures who’ve been killed in operations that Soleimani and his men have masterminded?

War is hell and, all other factors being equal, we all want peace. But the cause of “peace” activism now often operates as a cover for leftist hashtaggers acting as propagandists for dictators who spit on everything that Western leftists claim to support, including democracy, pluralism, feminism and LGBT rights. As Aleksandr Solzhenitsyn once noted, when the Soviets realized that they had fallen behind in the nuclear arms race, they “changed their tactics. Then they suddenly became advocates of peace at any cost. They started to convoke peace congresses, to circulate petitions for peace, and the western world fell for this deceit. [But] although an open war could not be conducted, they could still carry out their oppression behind the scene—terrorism, [p]artisan war, violence, prisons, concentration camps. I ask you: Is this peace?”

The Soviet Union is long gone. But this tactic lives on. Think of the way activists Linda Sarsour and Tamika Mallory, co-chairs of the anti-Trump Women’s March, embraced Louis Farrakhan, the notoriously anti-Semitic leader of the Nation of Islam and frequent visitor to Iran, all while attacking anti-theocratic feminists such as Ayaan Hirsi Ali in the most vulgar terms imaginable. Or consider how large segments of the Western left reacted to the 2015 Islamist terrorist attack on the offices of French satirical magazine Charlie Hebdo, which had published cartoons of the prophet Mohammad. No less a leftist hero than Glen Greenwald heaped scorn upon Charlie Hebdo, essentially accusing it of racism because it had dared to defy Islamist pieties.

It is true that war brings out the blinkered jingoism of the right. But it also brings out the inverted racism that has emerged as a by-product from the combination of Marxism and social-justice ideology that now constitutes the house creed of online progressive activism. In this conception of foreign affairs, those who act in opposition to Western interests—whether they kill thousands, such as Soleimani, or a mere dozen, as with the Charlie Hebdo killers—cannot exist on the wrong side of history.

In the late 1970s, a temporary alliance between Iran’s leftist, pro-Soviet Tudeh party and Khomeinist theocrats spelled doom for the Shah of Iran. But Western progressives would be wise to remember that when the Islamists were finished with the Shah, they turned their guns on the left. By 1982, Tudeh members were being purged from positions in government. Thousands of party rank-and-file were arrested, and the Tudeh leadership turned up on government propaganda videos, praising the one-party dictatorship created by their theocratic overlords. The left may have its “useful idiots.” But as recent events show, so, too, do the Ayatollahs.

Kaveh Shahrooz is a Toronto-based lawyer, human rights activist, and Senior Fellow at the Macdonald-Laurier Institute.