To Avoid Catastrophe, Our Leaders Need to Make Hard Choices Based on What We Know Now: MLI Report by Brian Ferguson 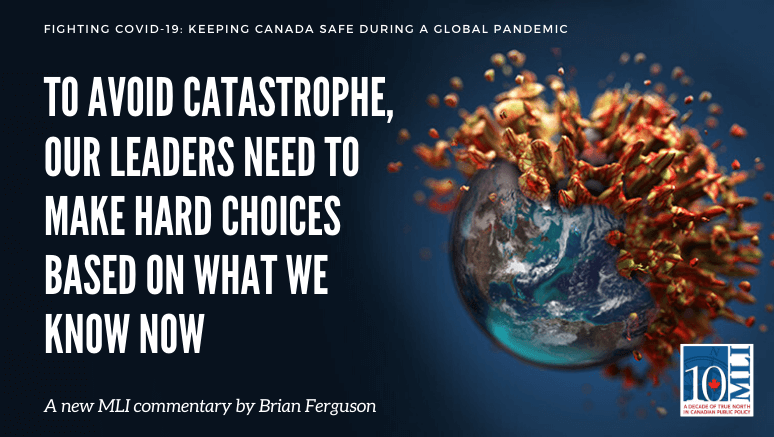 OTTAWA, ON (April 21, 2020): When we first entered into the COVID-19 downturn, many commentators predicted an initially steep drop followed by a rapid upturn: a V-shaped curve. However, it is increasingly unlikely our economy will recover in this fashion.

In a new MLI commentary titled “To Avoid Catastrophe, Our Leaders Need to Make Hard Choices Based on What We Know Now,” Brian Ferguson warns that the best we can hope for is a U-shaped recession with a fairly long, flat bottom to the U.

Yet, if we heed the advice to keep the economy closed for whatever undefined time it takes for a vaccine to come into widespread use, we will be headed for an L-shape recession. “We will, in fact, have moved from a recession into a state of depression equilibrium,” writes Ferguson.

The longer lockdown measures are in place, the less likely a sharp recovery becomes. As the recession drags on, we will move into a debt deflation situation in which Canadian incomes have fallen, but the value of their debts have not, and overall spending will fall producing a downward multiplier effect. Additionally, if the recession drags on long enough, we will move from a pure demand-side recession into a supply-side one and national output will fall.

“Of course, it’s easy enough to say that we need to set a date for the grand reopening,” explains Ferguson. “But we know that we can’t simply announce that all restrictions are off. We need to have some idea what’s likely to happen to the number of COVID-19 cases when we do lift the lid.” Even so, Ferguson points out that Canada is unlikely to have the testing capacity to have extensive understanding of the spread of the virus in time to begin opening up the economy.

“We’re going to have to make policy in the face of massive uncertainty. It’ll be a case of known unknowns, so we’ll know what we need to collect data on, but they’ll still be unknown.” asks Ferguson. Even so, Ferguson stresses that the federal government and provinces need a plan now to begin opening up the economy.

The author suggests looking at the experiences from other countries further along the epidemic curve than we are. From immunity testing to patient-specific mortality rates to risk trade-offs, it can help us to better understand what we’re dealing with and how we can shape the way we ease economic restrictions.

For example, while we’re recognizing that certain workplaces are essential and worth the risk of remaining open, why not extend our assessment process to all workplaces? We need to know – or to make a reasonable estimate of – the likelihood of the virus spreading within the workplace. If a non-essential workplace turns out to be low risk for transmission, why should it stay closed?

We also need to talk about immunity. Both the UK and Germany are looking at doing widespread testing for antibodies to COVID-19, and letting people who have the antibodies back into the workplace. Some epidemiologists are pretty dubious about this. Again, we could shut down until we have a solid answer to the immunity question, but that puts us back into a depression equilibrium. And while we’re thinking about testing, we should investigate group testing.

Letting “the virus determine the timeline” of the lockdown is medieval era thinking, according to Ferguson. Let us not forget our societies, and economies, have come through bad episodes in the past. To get through this one, it will require clear and realistic thinking: we must recognize that we are not going to have the kind of data we would like to have for planning purposes until after the crisis passes.

“COVID-19 isn’t the Black Death,” says Ferguson. “But without a clearly articulated plan for emerging from this crisis we run the risk of turning it into our own Antonine Plague.”

Brian Ferguson is Professor of Economics at the Department of Economics and Finance at the University of Guelph. He is a Faculty Associate of the Canadian Centre for Health Economics. His teaching and research interests are in mathematical economics, health economics and social welfare.

His work has been published in journals including Health Economics, Journal of Population Economics, Substance Use and Misuse, Applied Economics, and Canadian Public Policy.