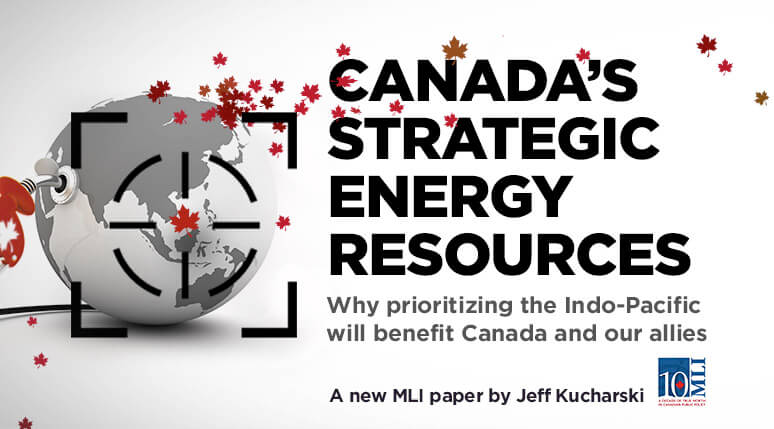 OTTAWA, ON (April 2, 2020): The world is currently in the throes of the COVID-19 pandemic while at the same time Russia and Saudi Arabia are in the midst of an oil price war. The result has been tanking oil prices and another punishing hit to Canada’s beleaguered oil and gas sector.

To avoid future squeezes domestically and to prevent our allies from having their energy supplies subjected to the whims of bad global actors, Canada needs a new approach to both its strategic energy resources and these broader geostrategic challenges.

In a new MLI paper titled “Canada’s Strategic Energy Resources: Why prioritizing the Indo-Pacific will benefit Canada and our allies,” Jeff Kucharski offers a bold vision of a Canadian strategic energy resources strategy – one that would advance our national interests in the rapidly changing and challenging Indo-Pacific region and beyond.

The Indo-Pacific will lead global demand for energy for at least the next several decades, driven by continued economic expansion and a population growth of about 4.3 billion people. According to the International Energy Agency, the Indo-Pacific region will account for approximately 60 percent of the global growth in energy demand by 2040.

Alongside the substantial future energy demand, energy security is a major concern in the region, especially among those countries most dependent on imports. China, Japan, India, and South Korea are the world’s largest importers of crude oil. All but China rely on imports for 80 percent or more of their energy needs, with the largest energy exporters to the region mostly residing in the turbulent Middle East.

“Rising tensions in the South China Sea, resource competition, coercive tactics, and the militarization of disputed territories all pose potential threats to security in the region,” notes Kucharski.

While still relatively small compared to other major exporters, Canada could have a significant impact on Indo-Pacific energy markets and on improving energy security in those countries by reducing their reliance on imports of energy from the Middle East. As Kucharski adds, “Canada’s economic future depends, in large part, on how we position ourselves to deal with both the opportunities and the challenges in the Indo-Pacific region.”

Kucharski proposes five policy recommendations, each aimed at preparing Canada to ensure it gains its full value of its strategic energy resources in the future as demand in the world’s largest energy market, the Indo-Pacific, continues to grow. These recommendations include:

A strong and healthy energy sector is vitally important to lifting Canada out of recession and sustaining a recovery in the Canadian economy. But beyond that, policy-makers need to take a long-term view and recognize the important role that Canada’s energy sector can play as energy demand continues to grow, particularly in the Indo-Pacific. Treating energy resources as “strategic” will contribute to economic prosperity at home while enhancing the energy security of our allies in the Indo-Pacific.

To learn more about for the important role that Canada’s energy resources can play in a broader Indo-Pacific strategy, read the full report here.

Jeff Kucharski is a strategic thinker, policy entrepreneur and academic. He is currently an Adjunct Faculty member at Royal Roads University in Victoria, BC. His public service career included executive and senior management roles in five Alberta government ministries as well as foreign postings in Asia, including with the Federal Department of Foreign Affairs and International Trade.