Canada’s courts and governments have themselves to blame for the lobster-fishery dispute: Ken Coates in the Globe and Mail 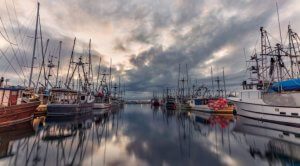 First Nations deserve attention to be paid to their long-standing and unresolved Indigenous and treaty rights, writes Ken Coates in the Globe and Mail.

Imagine the reaction you’d have if you – a Canadian worker, in any field – were told by the courts and the government that you could earn only a “moderate livelihood.” Imagine that on top of this, you’re told that there is no definition of “moderate livelihood” – that it’ll be worked out over time. Your howls of protest would be loud and intense, and rightly so.

Yet this is precisely what happened for the Mi’kmaq and Maliseet in Eastern Canada when the Supreme Court of Canada made its 1999 decision in the case of R. v. Marshall, ruling that the First Nations had a treaty right to fish for commercial purposes, but with a “moderate livelihood” restriction on that right.

The Marshall ruling about the fishery is a complex one, based on the idea that the 18th-century treaties signed by the Mi’kmaq and Maliseet were legally relevant and conferred on regional Indigenous groups the right to fish for commercial purposes. And after the ruling, First Nations, the federal government, and industry proceeded to negotiate arrangements that allowed for a rapid expansion of Indigenous engagement in the sector. The last 20 years have seen a remarkable rights-based development of Indigenous economic activity there, bringing jobs, new businesses, and optimism to previously economically marginalized communities.

But the core issues are far from resolved. First Nations have pressed for a greater role in the commercial fisheries. Non-Indigenous fishermen angry about what they view as an unjust expansion of First Nations fishing, have organized protests at several Nova Scotia locations.

And those tensions, stemming from that decades-old legal murkiness, have boiled over this month. The RCMP were already investigating a “suspicious” fire that destroyed a Mi’kmaq lobster boat in early October when about 200 people across two separate incidents in Nova Scotia are said to have destroyed a catch, burned a vehicle, and raided a business this week. Chief Mike Sack of Sipekne’katik First Nation has said that the most recent violence and intimidation appears to be targeting a business that agreed to sell lobster caught by Indigenous fishermen.

While First Nations' treaty rights are constitutionally protected, First Nations people will feel unjustly constrained by a judicial ruling that fails to define its terms and does not apply to others in the Canadian economy. Non-Indigenous fishermen, for their part, will protest any expansion of Indigenous fishery, believing that Indigenous fishing will reduce their catch and incomes. Furthermore, the fast-growing First Nations population wants and deserves a greater presence in the fishery.

There are several options available. Parties to the dispute could return to the Supreme Court of Canada and ask for a clarification of the “moderate livelihood” provision. But court decisions are unpredictable and costly. A process could produce a reduction in Indigenous fishing, the maintenance of the status quo, or a sizable expansion in the available Indigenous harvest. Who would want to roll the dice on this one?

Alternatively, Ottawa could legislate a definition and adjust harvests accordingly. This approach is unattractive, for the government would be seen as favouring one side or the other on the issue, converting what should be a legal process into a partisan political one.

Parties to the dispute could also return to the negotiating table, seeking a 2020 resolution to match the 2000 agreements that provided the foundation for the current Mi’kmaq and Maliseet fishery and, for two decades, brought relative peace and collaboration on the East Coast. This discussion, as in 2000, could include a commitment to address the negative impacts on non-Indigenous fishers that occur as a result of the resolution.

Mi’kmaq and Maliseet people have paid a substantial price for the legal ambiguity of “moderate livelihood,” but they tolerated the ruling as their role in the industry quickly expanded. With Indigenous employment and business successes mounting, and community returns escalating, First Nations justifiably pressed for a larger role and greater financial returns. But it’s also justifiable for non-Indigenous people to see this growth as a threat to their own incomes and industry, and call for a resolution that protects their well-being and communities.

To be clear, aside from the condemnable alleged acts of vandalism and arson, neither First Nations nor non-Indigenous protesters are to blame for this conflict. Responsibility for these tensions lies at the feet of governments, which have ignored 18th-century treaties for generations, failed to negotiate a modern treaty to update national commitments to Maritime First Nations, and have marginalized Indigenous peoples in the East Coast fishery and economy.

First Nations deserve attention to be paid to their long-standing and unresolved Indigenous and treaty rights. Quick action to finding a measure of justice for the Mi’kmaq and Maliseet people will be essential to defusing this conflict.

Ken Coates is a senior fellow at the Macdonald-Laurier Institute.