The long and poisonous tentacles of Kremlin intimidation: Marcus Kolga in the Toronto Star 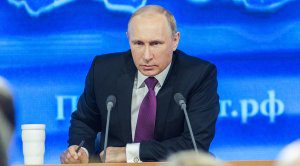 Threats of violence against critics and activists should be taken seriously by all Western governments. The threat posed by the Russian government’s efforts to strategically encourage emotional and extreme nationalist reactions to criticism of the Putin regime in Russian speakers through propaganda is very real; lives may even be at risk, writes Marcus Kolga in the Toronto Star.

The world has yet again been shocked by a brazen attempt to poison and kill another opponent of Russian President Vladimir Putin. The poisoning of Alexei Navalny fits a bloody pattern of assassination and intimidation that has been growing for nearly 20 years.

Targeted for his highly effective reports exposing corrupt Russian officials and oligarchs, Navalny is the latest victim in a long line stretching back to 2006, when former FSB agent, Alexander Litvinenko, was poisoned with a radioactive polonium in a London hotel by two Russian agents. Litvenenko became an enemy of the Putin regime after he exposed a plot by the FSB to blow up a group of apartment buildings south east of Moscow in 1999.

Russian opposition activist and journalist, Vladimir Kara-Murza was poisoned in Moscow in 2015, shortly after pro-democracy leader Boris Nemtsov was savagely gunned down steps from the Kremlin. In a coma for several weeks afterwards, Kara-Murza barely survived and endured years of painful rehabilitation, only to be poisoned once again in 2017.

In 2018, Russian GRU military intelligence agents employed Novichuk — the same KGB developed toxin used against Navalny — to poison the former Russian spy Sergei Skripal and his daughter Yulia in Salisbury, England, and which resulted in the death of an innocent bystander who was inadvertently exposed to it.

Designed to inflict horrific and highly visible suffering, the Putin regime uses poisoning both to kill opponents and intimidate critics.

Putin’s KGB style targeted poisonings and assassinations have forced several leading critics of the regime into exile — including political and human rights activists, journalists and environmental leaders, many of whom now live abroad in hopes of avoiding a fate similar to that of Navalny. That list includes Garry Kasparov, environmental activist Evgenia Chirikova, Mikhail Khodorkovsky and countless others. Personal safety may also force Navalny to remain in exile, perhaps fulfilling the objective of his would-be assassins.

Yet living abroad does not guarantee the safety of Putin’s critics or make them immune from the Kremlin’s intimidation, nor does it protect critics of the Kremlin living in the West. Kremlin propaganda agents have worked to radicalize portions of the Russian speaking community here in Canada over the past years and have attacked critics of the Kremlin, including myself, using Kremlin outlets, including the crypto-Stalinist, Komsomolskaya Pravda.

A toxic mix of both automated and radicalized trolls flood online comment sections of the pieces that I write about the Putin regime. The accusations range from the deeply ominous to absurdly hateful: I was accused last year of being a “demon, Satan, Ukrainian, evil Jew, ” in an email from a Mosocw based IP that ended with, “Evil scum, die!!!!!!” and signed by “Avtomat Kalashnikova.”

In May of this year, York Region Police investigated violent threats that were sent to me by a radicalized pro-Kremlin extremist. When offered to press charges, I declined, with the understanding that my rage-filled interlocutor had himself been victimized by Putin’s propaganda into becoming a tool of it.

Incessant trolling, intimidation and threats are part of the cost of being a critic of the Kremlin — as well as the regimes in China and Iran. These incidents serve as lessons that the Russian government is actively working to silence and intimidate critics both at home and abroad, whether through direct action or through proxies; some through economic incentives, while others through psychologically manipulative propaganda.

Threats of violence against critics and activists should be taken seriously by all Western governments. The threat posed by the Russian government’s efforts to strategically encourage emotional and extreme nationalist reactions to criticism of the Putin regime in Russian speakers through propaganda is very real; lives may even be at risk.

Thankfully, the Canadian government does occasionally act to protect us from foreign regime intimidation and information warfare. In 2018, Canada expelled a number of Russian government propaganda agents — a move shockingly characterized by some as “un-Canadian.”

The tentacles of poisonous foreign repression and intimidation are long and dangerous. Yet we must remain vigilant in order to ensure that the threats don’t escalate into violence against Canadians who are critical of foreign governments in Russia, China, Iran, and any other regime that engages in mass human rights abuses and corruption.

Marcus Kolga is a senior fellow at the Macdonald-Laurier Institute and founder of DisinfoWatch.org.