Looking at Sir John A. Macdonald Through Cracked Lenses: Patrice Dutil for Inside Policy 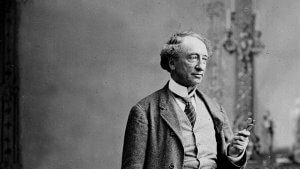 Citizens who decry the casual dismissal of Canada’s first prime minister are the ones who genuinely value Canadian history, writes Patrice Dutil.

It has been almost 30 years since anything like this has happened. One has to think back about the fury caused by the broadcasting of The Valour and The Horror, an NFB-CBC production. It was rejected by thoughtful opinion leaders because it presented evidence to condemn Canada’s efforts during the Second World War while completely neglecting the realities of war and the sacrifices made to defeat the Axis powers. The critics’ response galvanized a new appreciation of the Canadian war effort that has yielded excellent scholarship, public commentary and curriculum reform.

It was in that same spirit that on January 12, 2021, the Macdonald-Laurier Institute, in association with a loosely structured group based in Toronto called “The Friends of Sir John A. Macdonald,” published a full-page statement celebrating Macdonald’s 206th birthday in the National Post. It featured the signatures of 130 people: ordinary folk, educators, historians, writers, journalists, business people, former politicians, and others. They signalled their solidarity with Sir John A. Macdonald, but just as importantly called for the careful study of Canadian history in the public sphere and in schools.

While it was left unmentioned, readers knew exactly who was involved in the current campaign to wipe Macdonald from public view in Canada: careless commentators, indifferent teachers and lawmakers and, not least, delinquents who like to spray-paint and destroy monuments.

The response was dramatic. Within two weeks, the petition grew another fifty percent. There was also a strong negative reaction in certain circles as well. Self-righteous tweets flew fast, with little attempt to grapple with the substance of the message.

But three public responses challenging the statement merit closer examination. Luc-Normand Tellier, a retired professor at the Université du Québec à Montréal, appeared in Le Devoir six days later. And two pieces, both by scholars teaching in the Maritimes, were published online on earlycanadianhistory.ca; the first by Andrew Nurse, Director of the Centre for Canadian Studies at Mount Allison University (full disclosure: a good friend with whom I shared work for years), and the second by Jerry Bannister, Professor of History at Dalhousie University. Each will be examined in turn.

Luc-Norman Tellier’s piece was slightly more substantial. He took exception to my characterization of Macdonald as a democrat. His main point was that the label was deceptive, if not fraudulent. His evidence was that Macdonald did not allow a referendum on Confederation to take place before the country that united the three provinces (Nova Scotia, New Brunswick and the United Province of Canada) was launched on 1 July 1867.

My response to the piece, which was refused by the editors of Le Devoir, identified two key factors. The first was that no government had ever asked the views of its citizens on a merger project, not then, not now. The second was the considerable efforts made by Macdonald in 1883-85 to expand the franchise and broaden the right to vote to qualifying women and Indigenous people, a fact Tellier seemed unaware of. Finally, as if it begged to be repeated, Macdonald was surely the people’s democratic choice in that he won election in 1867 and again five more times. His party was elected with majorities, both in popular vote and in seats, each time with the exception of 1874, the famous CPR Scandal election.

Facts, the man said, can be stubborn things.

Context is also important. The spirit that animated the full-page statement in the National Post was born in 2020, when statues to honour Macdonald, including four dating back 130 years, were defaced in Ontario and Quebec during the summer. It was also the summer when Queens University Law School chose to rid itself of the Macdonald name and when a high school principal in Nova Scotia apparently exercised her right to unilaterally rename her school. Those events built on what has become a routine incantation of Macdonald as a genocidal white supremacist. Three years ago, a teacher’s union in Ontario voted to have the Macdonald name removed from all schools. An awakened attention to what provincial school curricula say about Macdonald (almost entirely negative) has also brought nerve to the task.

What about the two other commentators?

Andrew Nurse argued that the petition “self-consciously intends to re-assert a more traditional way of looking at Macdonald and at Canadian history.” His second point was that Macdonald’s legacy was “presented as little short of ‘greatness’.” He took exception to a few phrases in the text, judging them as unbalanced. In his view, the fact that the statement listed nation-building attributes and then stated flatly that Macdonald made “mistakes respecting Indigenous peoples” was misleading.

Balance is clearly in the eye of the beholder, but for Nurse, the text was not balanced enough. He then challenged its accuracy by stating that “the statement ignores the context in which residential schools were created” quoting the Truth and Reconciliation Commission’s Report as if it were gospel. What was missing for Nurse was a full list of wrongs.

There is a limit as to how many words can be placed on a newspaper page designed to attract the eye. But here is where context matters (something Nurse did not write about): Indigenous people were being murdered from the south pole right up to the 49th parallel in the last half of the 19th century. It is precisely “in context” that Macdonald must be judged, in his own time. In his day, his policies were the envy of every progressive-minded inhabitant of the Western hemisphere. Of course, other policy choices could have been taken (the ones of any reasonable inhabitant of the 21st century easily come to mind), but they were not options in the later half of the 19th century.  To judge past actors by the standards of today is simply bad history.

Nurse was at least candid enough to say what he wanted. He wished Canadians to “learn about colonialism” and “to think about the TRC” and then he bared his true objective: to “employ history to build a different kind of legacy.”  Unless Macdonald is seen exclusively through the cracked lens of ideas of the past, he is not worth looking at.

Jerry Bannister found the statement “troubling” (the favourite weasel word of academics) because it hails Macdonald as “the most respected and honoured Canadian of his era.” One only wonders who else was in the running! He saw the statement as “emotional” as it wished to come to Macdonald’s defence, something he also decried as suspicious.

Given the context of the anti-Macdonald sentiment displayed in 2020, the “defence” that seems legitimate and emotional , in defence of the wrongly accused, is no vice.  Bannister does not seem aware that it was CBC-Radio who first “tried” John A. Macdonald on its Ideas program – and he was found not guilty. He also took umbrage to the “personalization” of the issue, clearly forgetting that the statement was issued on a birthday. It was only logical that the individual’s accomplishments be underscored on that day. Everybody knows Macdonald did not work and govern alone. That is probably why he won six elections.

Bannister also criticized the statement for expressing thanks to Macdonald’s legacy, and yet oddly concluded that it “is their own personal business” of those who drafted the statement and of those who supported it.  So why mention it? Are people not allowed to speak? He then warns against a “slipperiness,” unable to concede that people who do appreciate the life and works of Macdonald can, indeed, be at the same time harsh critics.

He writes that “the point of history is to try, as best we can, to be clear, reasonable and truthful.” Clearly, he fears that unless all the ugliness comes out first, and stays, then no “balance” is possible. That is troubling.

Finally, in a feat that defies logic, Bannister accuses the people who organized the petition that highlighted context of practicing presentism. Bannister then waved his condescending hand to cancel the debate: “I think this pro-Macdonald campaign undermines our efforts to nurture the study of Canada. In holding Macdonald up as a hero (however flawed), it makes it harder for those of us who genuinely value Canadian history.”

Neither Nurse nor Bannister had factual problems with the published statement. Their problem was with those who dared to speak out: those who make an effort to bring balance to the debate about Macdonald by reminding fellow citizens that people of the past must be judged by the standards and practices of their day are not welcomed.  And yet it is conventional wisdom that it is only by examining history through clear lenses that capture context that the past can be understood.

Citizens who decry the casual dismissal of Canada’s first prime minister are the ones who genuinely value Canadian history. No lessons need to be taken from those who insist that history be seen through the cracked lenses that separate realities by offering shards of distorted truths while ignoring the big picture.

Patrice Dutil is Professor of Politics and Public Administration at Ryerson University and a Senior Fellow at the Macdonald-Laurier Institute. He is co-editor of Macdonald at 200: New Reflections and Legacies.