Louis St-Laurent - Getting the Job Done: Patrice Dutil for Inside Policy 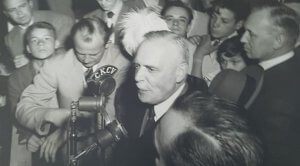 At a time when Canada has lost the ability to “get things done,” Louis St-Laurent’s record as prime minister and as a politician is worth remembering, writes Patrice Dutil.

As a teenager growing up in the 1970s, I often felt as though much of the pop culture of the time was obsessed with the 1950s. No doubt the boomers in their 30s (and their parents) were already feeling nostalgic for a humbler time when Rock ‘n Roll was a little simpler and when people could easily tell what was left from right. It was hardly a period when hardships were erased (polio and tuberculosis still ravaged certain populations and racism was rampant) but the general zeitgeist was one where people believed that those who worked towards progress were rewarded.

The 1950s soon became a distant memory, however. Forty years later, and in the midst of a pandemic, perhaps it’s time to rediscover them again, particularly in terms of governance – the key ingredient to realizing advancement. The government of Louis St-Laurent has a lot to teach us in this regard about getting things done.

As part of his campaign for reelection in 1957, Louis St-Laurent made a campaign swing through the Niagara region and stopped in Wainfleet in early June. Campaigns in those days were not driven by opportunities to win national television coverage, but rather involved good old glad-handling with folk in the small towns and opportunities to talk about what was working and what was going wrong with the country. Wainfleet sits a few kilometres from Lake Erie and St-Laurent was sure to talk up the dramatic improvements his government had brought to the St. Lawrence Seaway.

When he arrived, St-Laurent was greeted by Lehman Laurier “Ray” Davis, the Clerk of Wainfleet Township. Davis was a public servant, but that did not stop him from being active in the local Liberal organization and he was excited to welcome the prime minister. (Davis was given his middle name in honour of the Liberal prime minister who had just won the 1900 election a few days before he was born.) The Liberals were still favoured to win, but polls were indicating that John Diefenbaker’s message was resonating with voters.

Davis’s youngest daughter, Janice, missed school that day to meet St-Laurent. “I remember being there and shaking his hand. It was a big deal because nobody came to Wainfleet back then,” she remembered. “‘Uncle Louie’ was revered by the Davis family who were staunch Liberals at that time. But we had statesmen then, not politicians.”

Janice Davis Muirhead’s memory probably speaks more eloquently than most pundits as to what is wrong about politics and governance today. There is widespread discussion as to whether Canada has lost the ability to “get things done.” Some think it’s a question of simply having a stronger political class of “statesmen,” and I think there’s merit to this view. But how can the class of politicians be changed? The country is waiting for a new type of politics, much as it did in 1896, 1921, 1949, 1958 and 1968. Surely, the pandemic has made it so, but only in the sense that it has aggravated a worsening condition. In considering a response, I think that Louis St-Laurent’s record as prime minister and as a politician is worth remembering.

St-Laurent was the right man at the right time when he became prime minister in November 1948. Nobody really expected much from him, but he knew Canadians better than they did themselves. He proved to be a highly effective political operative, an uncontested leader in cabinet, a self-starter, an unimpeachable character and a man of vision. Part bulldozer, part psychologist, part cajoler, part hard-nosed realist and part idealist, St-Laurent got things done with minimal flash seeking no other reward than the opportunity to do more.

Canadians, he knew, wanted new things. They emerged from the Second World War with an appetite for change and the Mackenzie King government’s offer of a “baby bonus” went a long way to help care for growing families. The Canadian economy sputtered for a few years but by the late 1940s was producing goods for a vastly expanding American market and an insatiable appetite in Western Europe as countries rebuilt. The national debt was enormous, but Canadians were open to people of vision.

Louis St-Laurent was the best of them and among the many things his government tackled, the task of “getting things done” was key. Within a hundred days of assuming office, St-Laurent made key decisions Mackenzie King simply could not do. He approved Canada’s participation in NATO, eventually forward deploying air and ground forces to Europe, and recognized the state of Israel. In time, he also oversaw the growing operational coordination between Canadian and American air forces on air defence, the latter eventually paving the way for the standing up of the North American Air Defence Command under his Progressive Conservative successor.

St-Laurent also met with President Harry Truman to discuss the possibility of retooling the St. Lawrence river in order to allow for bigger ships and for power generation. It had long been planned but was kept on hold because of fussy American objections. Truman pleaded that he was handcuffed by Congress, but St-Laurent persisted with the planning and gave a clear signal that Canada was to proceed with its part of the necessary works, with or without US participation. It took four years, and the Eisenhower administration, but the Americans finally agreed. By 1958, most of the works had been accomplished.

The same could be said about the Trans-Canada Highway (1949), multiple radar lines for air defence (Pinetree Line extension, Mid-Canada Line, Distant Early Warning Line), the Canso Causeway in Nova Scotia and, not least, the transcontinental gas pipeline from Alberta to central Canada. St-Laurent’s gravest decision was to go to war over Korea. This triggered a massive, multi-billion dollar rearmament program that entailed a significant expansion of the Canadian army, navy, and air force, including new fighter squadrons, new naval ships, such as the commissioning of an aircraft carrier (HMCS Bonaventure, Canada’s last), and a launch into aerospace engineering with the Avro Arrow. Today, the federal government has made commitments to rebuild the military but seems fundamentally unable to deliver on anything substantive. This ability to decide has now become unimaginable.

What has changed? Politics today is very different. The glare of the media (not least social media) magnifies every little bit of opposition to the point where it paralyzes government. Politicians are afraid to plant firm stakes on important issues and instead endlessly send mixed messages for fear of alienating some small segment of the population. There are hard structural issues also. Much of the tax dollar goes to health care funding now and precious little money is left to invest in infrastructure. Not least, the world is inexhaustibly interlinked and in many ways that has left Canada vulnerable to the wishes being championed in foreign capitals. Should Canada have its own capacity to produce vaccines? Why can’t firm decisions be made on military procurement?

But are these unsolvable problems? Canada’s health care system is mired in forty-year-old rules that guarantee inertia and inefficiency, which at the same time hamstring the government’s ability to do things. And yet no leading politician is willing to tackle the issue. On construction of key infrastructure like pipelines, the responsibility to consult (Indigenous people yes, but not only them) seems to discourage any timely action. Instead, we get dithering.

It does start with leadership. Louis St-Laurent and the ministers who surrounded him had a bold vision for the country and were not afraid to build it. They welcomed capital and knew how to work with it because they had worked in it (something few federal ministers today can include on their CVs). They unanimously applauded efforts to “build government” and to build infrastructure. The Prime Minister also knew how to delegate to his ministers. He could not resist the entrepreneurial flair of C.D. Howe, his minister of everything, but Howe was only one of many get-it-done ministers. St-Laurent was willing to see the federal government involved in university funding, hospital funding, social security, and aid to developing countries. He was also quite happy to see the federal government assume its responsibilities (and those of the provinces, if that was necessary) to deliver on those goals. The elaboration of equalization payments demonstrated that thoughts could translate into action.

The can-do attitude of the federal government was demonstrated in other areas. It responded vigorously to help Hungarian refugees find a place following the revolt of 1956. It also showed flash in helping the Inuit community cope with terrible hardships. St-Laurent recognized that the old approaches were not a match to the emergencies of starvation and disease. His vision was to involve the Inuit as much as possible in the development and administration of the vast northern areas. He framed the initiative by saying that it was something “the Canadian people would want to have their government” do, so as to provide the Inuit “with opportunities for developing their talents and making themselves real citizens of the Cana­dian nation.” He appointed an energetic young fellow to lead the charge, one Jean Lesage (who became a transformative Premier of Quebec six years later).

Lesage was distressed by reports of illness and starvation and seized by his mission. A committee on Inuit issues (of course it was called Eskimo Affairs in those days) quickly narrowed the policy options, with speed being the key criterion. This was not a simple matter: concerns were expressed about how the Inuit way of life might be affected. The language was modern and inclusive compared to the paternalism and racism expressed in the past. The St-Laurent government felt responsible to provide the essentials of survival and created a Northern Health Services Division in the Department of National Health and Welfare. By 1955, over 800 Inuit were receiving treatment in southern sanatoria.

The government knew well that the intervention could create severe dislocations in the northern communities. But it was worth doing, simply because the alternative was to allow these Canadians to die. The same logic was applied to the relocation of small and remote Inuit communities who were facing death by starvation. Today, the merits of the High Arctic relocations are being debated is nicely air-conditioned seminar rooms, but the St-Laurent government had no such luxury. It just acted. The apology expressed by the Harper government in 2010 over relocations and by the Trudeau government in 2018 over the tuberculosis interventions are the work of politicians.

The policy of Northern Development and assistance to the Inuit was a microcosm of the St-Laurent government’s stance. There was a moral imperative and fantastic administrative undertakings. Necessarily, mistakes were made. But it set an example of trying to find ways to work with the local population and set Canada on a path of partnership with its northern population. In less than two generations, the Inuit would have their own government. Canada received phenomenal benefits; so too did the Indigenous population. That is the work of statesmen, not politicians.

Patrice Dutil is professor of politics and public administration at Ryerson University and a senior fellow at MLI.