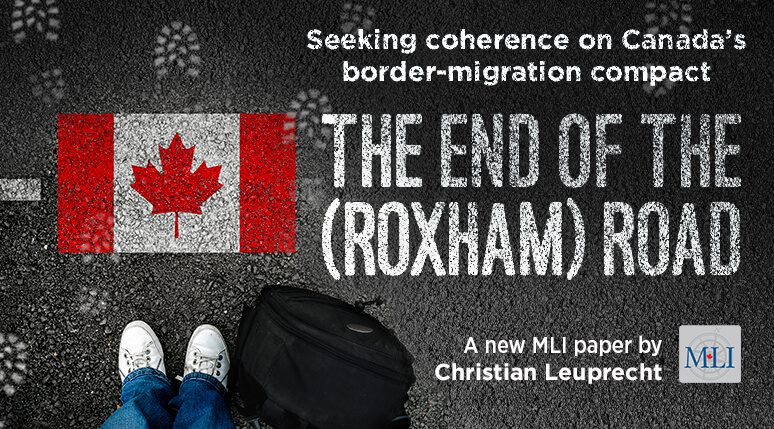 OTTAWA, ON (December 12, 2019): An increase in irregular migration has placed strain and scrutiny on Canada’s immigration and refugee system. The controversy boils down to a question: under domestic and international law, who should qualify for asylum and refugee protection?  On the one hand, Canada needs to ensure the integrity of our border and migratory regime.  On the other hand, Canada must meet its domestic and international obligations.

MLI’s latest study by Munk Senior Fellow Christian Leuprecht lays out the reforms necessary for Canada to square these two challenges.  Titled End of the (Roxham) Road: Seeking coherence on Canada’s border-migration compact, the study explains how asylum seekers and immigrants are discouraged from following proper legal procedure to enter the country and how irregular migration has lowered public support for immigration overall.

Popular sentiment against US President Donald Trump has fostered a narrative that attributes increased irregular migration largely to policy changes by the Trump administration. However, despite the convenience and appeal of such an explanation, the Leuprecht study reveals this version of events as an over-simplification that could lead us to the wrong policy responses.

In reality, the surge in irregular migration is due to a myriad of complex factors including but not limited to changing conditions in the US that predate the Trump administration, changes in Canadian border policies, and an array of international drivers over which both countries have little control.

Proponents of immigration are inclined to champion the underdog migrant who makes it to Canada to claim refugee status. However, such attitudes can lead to unintended consequences.

“This lenient attitude has effectively turned irregular migration into a back door to Canada,” Leuprecht concludes. “A disproportionate number of refugee claims by irregular migrants turn out to be unfounded yet few rejected claimants ever end up being deported.”

Although small in relative terms, the spike in absolute numbers is overwhelming the Canadian refugee system and undermining its integrity. Quebec is affected disproportionately; in 2017, the province experienced a 230-percent surge in crossings, primarily from New York state across the now infamous Roxham Road. Since 2017, around 20,000 migrants a year have been entering Canada irregularly. This number is anticipated to dip slightly this year to an expected 15,700, but total refugee claims from all sources – irregular border crosses plus claims lodged inland – are actually running higher this year than last.

Contrary to the popular belief that the exodus is driven by an inhospitable Trump administration, Leuprecht documents the widespread practice of migrants entering the US legally in order to then cross into Canada outside a designated border crossing.

“About two-thirds of asylum seekers cross irregularly into Canada by land actually enter the United States legally on a visa for the sole purpose of making their way to Canada,” notes Leuprecht.

Crossing by land from the US has become much more attractive since Canadian policies meant to target human traffickers and at-risk travellers have reduced the number of attempts to cross into Canada by air and sea.

The government is intent on renegotiating the Safe Third Country Agreement (STCA) with the United States beyond ports of entry to cover the entire land border. However, Leuprecht explains that this measure is unlikely to solve the complications that give rise to irregular migration to Canada in the first place.

Leuprecht lays out a strategy that honours Canada’s longstanding migration and border compact based on an understanding that the only sustainable approach to irregular migration is premised on closer cooperation with the United States that includes:

These measures are designed to instill confidence in Canada’s commitment to managing its borders effectively, to facilitating the successful social and economic integration of migrants, and to protecting Canada’s prosperity, while ensuring that Canada continues to meet its obligations in accordance with domestic and international law.

Christian Leuprecht is Class of 1965 Professor in Leadership at the Royal Military College, Director of the Institute of Intergovernmental Relations in the School of Policy Studies at Queen’s University, Munk Senior Fellow at the Macdonald-Laurier Institute, Adjunct Research Professor at the Australian Graduate School of Policing and Security, and Fulbright Research Chair in Canada-U.S. Relations at Johns Hopkins University’s School for Advanced International Studies.