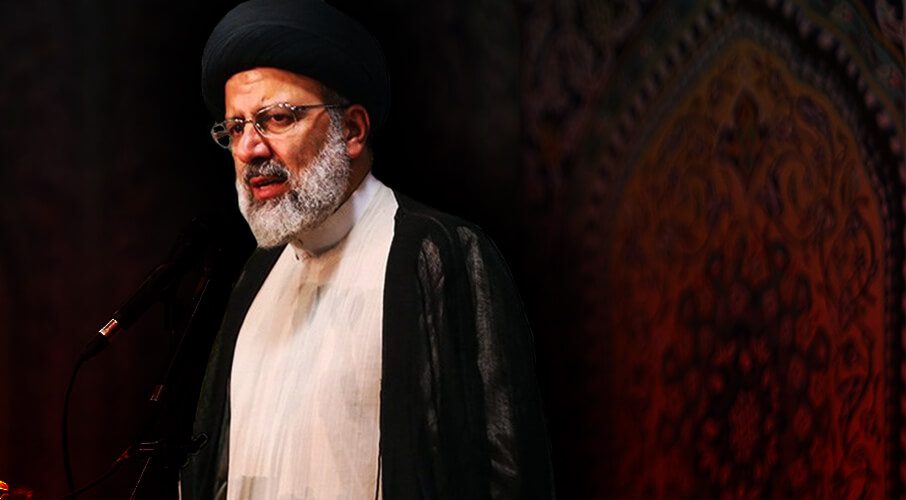 In picking a mass murderer as his potential successor, Iran’s supreme leader hopes to make the United States a willing partner in the repression of his country’s people, writes Mariam Memarsadeghi.

This article originally appeared in Tablet magazine and is being republished with permission.

As the Biden administration gives every indication of removing most sanctions on the world’s top state sponsor of terror in pursuit of its nuclear deal, that regime has produced a new president personally culpable—and sanctioned by the United States—for large-scale crimes against humanity. As the handpicked sixty-year-old Ebrahim Raisi is also likely to succeed the ailing Ali Khamenei as the Islamic Republic’s next supreme leader, his deeply disquieting record and mindset warrant close attention.

Raisi became an Islamist ideologue as a teen studying in the seminary in Qom. After the revolution, when he was only 19 years old and lacking any university education, he was appointed as a prosecutor, rising over the following four decades to fill the positions of attorney general, deputy chief justice and, most recently, chief justice of Iran’s theocratic dictatorship.

Most notably, though, Raisi was one of four members of a death committee responsible for the 1988 execution of thousands of Iranian prisoners of conscience in the space of a few months. The ideologically motivated mass executions constituted both a crime against humanity and genocide—a cleansing of religious infidels—according to international human rights expert Geoffrey Robertson. It was a massacre, he says, comparable to those at Srebrenica and the Katyn Forest.

Raisi would typically spend only a few minutes with each prisoner—some young children—asking them questions to test their allegiance to radical Islam. The prisoners, mostly leftist revolutionaries who had helped bring the regime to power, typically refused to feign loyalty, even after prolonged and brutal torture, which in some cases was personally directed and overseen by Raisi. It is estimated that a minimum of a few thousand and as many as 30,000 were killed by hanging or firing squad. The massacre is still shrouded in secrecy, with the regime continuing to deny information to the families of those killed, including about the location of their loved ones’ remains.

What is known is the speed and efficiency of killing, with hangings using forklifts every half hour, and the dumping of dead bodies in piles on trucks, a method and pace that traumatized the executioners themselves. Virgins were systematically raped before their execution, to circumvent the Islamic prohibition on killing virgins and to prevent women and girls from reaching heaven. The executed were ordered to write their own names on their hands before they went to their death. The massacre is a trauma etched into the collective consciousness of all of the Iranian people, throughout the country and throughout the diaspora.

At the time, Grand Ayatollah Hossein Ali Montazeri, who had been designated to succeed the revolutionary leader Khomeini, condemned the mass executions in an act of dissent. In response, Khomeini rescinded Montazeri’s clerical rank, canceled his selection as the next supreme leader, and condemned him to house arrest. In Montazeri’s place, Raisi rose up.

To this day, Raisi is proud of his role as a dutiful mass killer. In 2017, he posted to his Telegram channel a video in which he justified the massacre, and in 2018 called it “divine punishment” and a “proud achievement” for the revolutionary regime. During his tenure as attorney general (2014-2016), executions spiked significantly compared to previous years, and during his time as judiciary chief (2019-2021), the regime shot to death at least 1,500 peaceful protestors on the streets in more than 200 cities and imprisoned, tortured, and executed countless more, in the biggest act of state violence since the 1988 prison massacre.

An ardent ideologue, Raisi believes that state violence is not only justifiable—as autocrats typically do in their commitment to regime survival or “national security”—but that it is godly. He has not only justified but exalted the Islamist theocracy’s violence by elevating it above all other violence on earth:

There are armies, soldiers, wars, etc. in all of the world, but the difference between us and them is that we are holy; our judiciary is holy and our regime is holy … There are various threats out there that want to annihilate this sanctity; defenders must ensure that this sacredness is not damaged. The prosecutor plays an important role in identifying [the threats], and in making sure that action [in facing and combating the threats] is taken in a timely and appropriate manner. We must not allow corruption to infiltrate anywhere in the country.

Historian Ladan Boroumand is an expert on the Iranian revolution and a documentarian of the Islamic Republic’s four-decades-old commitment to killing off its political opponents, including her own father, a democratic dissident who was assassinated by the regime in Paris in 1991. “Raisi considers the Islamic regime to be the embodiment in this world of God’s governance,” explains Boroumand. “Therefore, state institutions are sacred and holy and by definition unaccountable to Iranian citizens. Citizens vis-á-vis the Islamic government are like creatures facing their creator; they have no rights of their own. In this, Raisi is a faithful follower of the founder of the Islamic Republic, Ayatollah Khomeini. He is a proponent of Islamist totalitarianism.”

In 2019, on the 40th anniversary of when the Islamic Republic took 50 Americans hostage for 444 days, the United States sanctioned Raisi for his role on the death commission as well as for the execution of children and the repression of human rights defenders in recent years in his capacity as chief justice, and for his role in the brutal crackdown on 2009 Green Movement protestors.

The sanctions targeting Raisi were imposed as part of a set of sanctions on the supreme leader’s inner circle. More sanctions were added later on the leadership’s powerful “foundations,” which are the mafia state’s primary mechanisms for control of large swaths of the Iranian economy and illicit financing. These included one of the regime’s largest, the Astan Quds Razavi Foundation, which is directed by Raisi. This “foundation” has aided the Syrian dictator, Bashar al-Assad, making Raisi complicit in crimes against humanity in Syria.

The Trump administration, which imposed these long-justified and necessary sanctions, made clear that the sanctioned individuals and entities were designated because they had repressed and robbed the people of Iran. It cannot be overstated how profoundly this action impacted Iranians who had yearned for decades for an acknowledgement of the grotesque injustice inflicted upon their loved ones. Over 30 years after the prison massacre, Iranians saw those most responsible for the killing and torture, as well as for the confiscation of their personal and business assets, finally held accountable—even if not in a court of law, even if not in their own country, and even if the culpable continued to wield power.

Khamenei’s elevation of Raisi to his right hand is meant to spite both the Iranian public and the United States. In recent years, Iranians have been more overt and more unified than ever in their struggle for a peaceful overthrow of the corrupt theocracy that has forfeited any semblance of popular consent to its rule. In response to the so-called “election” that ultimately brought Raisi to power with a supposed 50% of the vote, they staged an unprecedented nationwide boycott. Empty polling stations were broadcast by satellite TV channels back into the country, an echo of the people’s larger campaign of “No to the Islamic Republic!”

Iranians see no prospect for reform of the rotting theocratic system that is crushing them except for its wholesale removal. Throughout the Arab world, too, people living in the Islamic Republic’s imperial dominion are taking great risks to push back against the medieval cabal that is robbing them of dignity and a future in the name of God. The new president of Iran is meant as a bulwark against these courageous aspirations, and a signal of ever-increasing determination to stifle and repress.

Khamenei knows the fury of people in Iran and the region has been fueled in great part by the crippling sanctions imposed by the Trump administration, which President Biden may soon undo—but also by the administration’s truth-telling about the brutality and corruption of regime officials. The highest humiliation for the world’s most anti-American regime, however, was the assassination of Khamenei’s favorite and most powerful loyalist, Islamic Revolutionary Guard Corps Commander Qassem Soleimani. Overwhelming financial pressure, scrutiny of human rights abuses and corruption, assassinations of top officials, relentless acts of espionage and sabotage (much enabled by the Israeli state’s moles at the highest ranks of the nuclear program and the IRGC), mounting dissent, and the regime’s own profound structural crises of mismanagement and incompetence have made the Islamic Republic more brittle and more vulnerable than ever.

But Biden’s Appeasement 2.0 policy has already given the regime a new lifeline, and with the selection of Raisi, Khamenei is puffing out his chest, showing that he knows that the United States has abdicated its own strong hand in favor of a losing one. The regime has studied—and sought to shape—the ideological underpinnings of the Obama/Biden outlook on the Middle East, a “realignment” toward accommodation of the regime at any cost. Emboldened by the recognition that Biden, Secretary of State Antony Blinken, and Malley will stop at nothing to re-enter the nuclear deal, Khamenei feels unconstrained in choosing his potential successor and untroubled at making the American capitulation look even more desperate and devoid of morality.

The regime uses its nuclear program as a means to extort the United States so it can survive. But as much as the Obama/Biden playbook may want to keep the regime in power as a “counterbalance” in the region—a nonsensical phrase, since the “other side” being “balanced” in this formulation would be the United States and its regional allies—the regime itself knows it is in an irreparable legitimacy crisis, no matter how much the United States accommodates it. The regime knows it is structurally incapable of being accountable to the Iranian people. It knows that with its monstrous network of patronage and corruption, it is incapable of addressing the compounding existential crises that have galvanized the mostazefeen, the downtrodden in whose name the revolution was originally waged. It knows that any measure of freedom and openness it may grant to the Iranian people will only be used to press for wholesale regime change.

Khamenei is a student of the Soviet Union and the KGB. He knows how glasnost and perestroika backfired. His regime’s decay is undeniable, and the Iranian people’s determination to fight him will only grow. But he has decided the only recourse is further brutality, to which he hopes to make the United States a de facto partner.

Khamenei wants to put the United States in the debased position of not only lifting sanctions but lifting them on a president who has committed crimes against humanity. He wants to terrorize the people of Iran further and show them that they have nowhere to appeal to—and that the standard-bearers of freedom and human rights prefer to send pallets of cash to mass murderers than to support the legitimate and peaceful aspirations of ordinary Iranians. By doing so, he intends to fortify the culture of impunity he has created for his yes-men and himself. He wants to make the Iranian people lose their deep and abiding faith in the United States and give up on their dream of becoming a democracy. President Biden would be profoundly wrong to give Khamenei what he wants.

Mariam Memarsadeghi is a Senior Fellow at the Macdonald-Laurier Institute and a leading advocate for a democratic Iran. Her writing has appeared in The Washington Post, The Wall Street Journal,  Newsweek, The American Interest, and other publications. She is co-founder of Tavaana: E-Learning Institute for Iranian Civil Society.