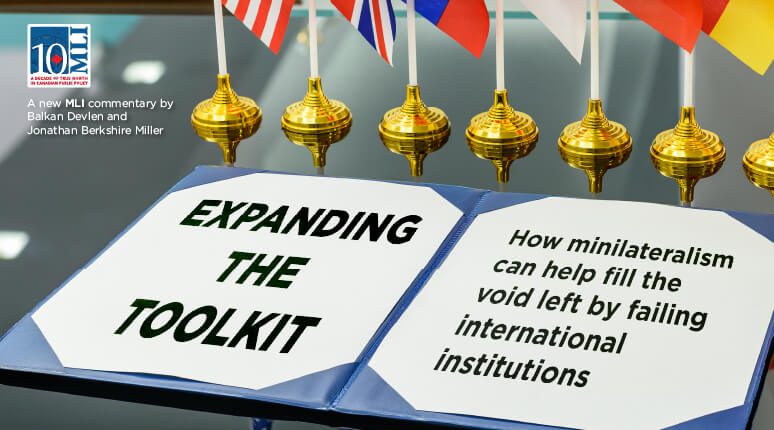 OTTAWA, ON (December 23, 2020): Global institutions have been backsliding in recent years, falling victim to ineffective governance and revisionist authoritarian regimes. But what is to be done?

According to Balkan Devlen and Jonathan Berkshire Miller, what is needed is a rethink of multilateralism. In MLI’s latest commentary titled “Expanding the toolkit: How minilateralism can help fill the void left by failing international institutions,” they examine the problems facing international institutions and develop a roadmap for a new solution.

The most significant issue presently is the subversion of international organizations by states like Russia and China. Furthermore, these institutions are vulnerable to this kind of hollowing out due to an increasingly insular United States. Without US leadership, there is effectively a power vacuum for authoritarian regimes to exploit.

To respond to these challenges, the authors suggest reasserting Western interests in these organizations as a start. But moving forward, what is needed is a “nuanced and layered strategy of minilateralism for Canada and other liberal democracies – one that should be pursued in tandem with the efforts to save global institutions.”

Minilateralism refers to engagement with a small number of countries based on a common shared understanding of norms, values, and interests. This would involve Western countries focusing on developing a more limited set of international organizations that are not universal in their membership.

The authors offer three examples of possible minilateral arrangements, including “a ‘community of democracies’ by expanding the G7 into a D10 or even D20, institutionalizing cooperation between like-minded states in the Indo-Pacific, and revitalizing the transatlantic alliance with a re­newed focus on the political dimension of NATO.”

By centring multilateral cooperation with like-minded states and allies, Devlen and Miller suggest that a more cohesive group of states could have an outsized impact on the issues they meant to manage. Far from being exclusionary,  a minilateral approach would be layered on top of existing institutions. Every effort should also be made to revive many of the faltering existing institutions.

But unlike current institutions, they will not be open to authoritarian regimes that try to undermine liberal democratic values, that do not respect human rights, and that will try to subvert our own societies and threaten the societal cohesion of our countries.

“Canada can and should play a role at the global level in leading a community of democracies in the post-pandemic world,” argue Devlen and Miller. “What we need is a more nuanced, tailored, and interest-oriented approach to multilateralism that privileges engagement and cooperation with fellow democracies across the world instead of multilateralism for multilateralism’s sake.”