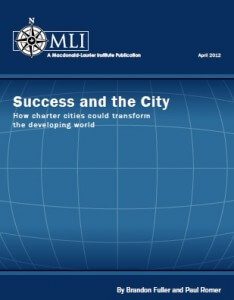 OTTAWA, April 25, 2012 – Canada has a unique opportunity to assert itself as a world leader in helping developing countries by supporting Honduras in its effort to create a new city with an innovative governance model, two prominent thinkers argue in a paper released today by the Macdonald-Laurier Institute (MLI).

In fact, according to world-renowned economist and commentary co-author Paul Romer: "Our urbanizing world does not need more aid; it needs more Canada – more of the rules, norms and know-how that lead to good governance, economic vibrancy and the rule of law."

Canadian involvement in the new city could help to trigger significant private investment, economic growth and reductions in poverty in Honduras, write Romer and his co-author Brandon Fuller in their commentary, Success and the City: How charter cities could transform the developing world.

The authors state that the biggest obstacle to growth and development in the world is not a shortage of money, but rather poorly functioning institutions, such as the police, the courts and public administration, or what the authors call "the dysfunctional systems of rules and enforcement that keep people from reaching their true potential."

The charter city concept circumvents dysfunctional systems of rules by allowing a city to operate independently under a new system of rules in a reform zone.

Here's how it would work: Developing countries can create special zones for reform, known in Honduras as la Region Especial de Desarrollo (RED). Countries can then partner with credible allies, like Canada, to implement new economic and social rules on a greenfield site to which people are free to opt-in.

Each site would have four common elements: 1. an undeveloped piece of land large enough to one day accommodate a city; 2. a charter that specifies the broad rules that will apply to that city; 3. a commitment to choice, allowing residents to freely enter or leave; and 4. a commitment to treat all residents equally under the law.

Firms capable of investing in large-scale urban infrastructure projects in the developing world are often discouraged from doing so because of the political risk. The charter cities concept aims to reduce such risk "to a negligible level", removing a major barrier to investment.

"The RED government will be largely independent from the Honduran central government," write Romer and Fuller. "The leadership in the RED has the ability to partner with foreign governments – like Canada – in critical areas, such as policing, the courts, customs and anti-corruption."

Canada's contribution would be to help establish institutional credibility in a region to which millions of people could move. "Such a partnership can do what traditional aid cannot: offer people a chance to live and work in a safe and well-run city," creating an example that could inspire reform throughout the Americas.

Canadians are increasingly aware of the limits of traditional aid, but also agree that supporting international development is both in Canada's interest and the right thing to do, the authors write.

The Canadian government would cooperate with Honduras to create a Transparency Commission, a governance board which would include a Canadian representative. In policing, Canada's RCMP could assist in the creation and management of an "honest and efficient police force". The authors also say Canada could help create a transparent judiciary.

"Canada can work with Honduras to do what no amount of financial aid has ever done – offer the citizens of a developing country opportunities to lift themselves out of poverty and earn a better future for their children," write Romer and Fuller.

For more information or to arrange interviews, please contact Tripti Saha at tripti.saha@macdonaldlaurier.ca or call (613) 482-8327, ext. 105.

The Macdonald-Laurier Institute is the only non-partisan, independent national public policy think tank in Ottawa focusing on the full range of issues that fall under the jurisdiction of the federal government. www.macdonaldlaurier.ca