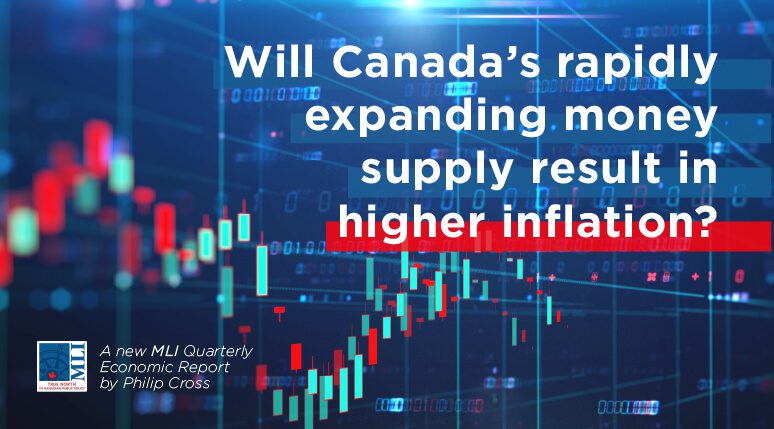 OTTAWA, ON (March 24, 2021): Despite a generally slowing economy, a surge of commodity prices has sparked concerns about a resurgence of inflation. In the latest quarterly economic report titled, “Will Canada’s rapidly expanding money supply result in higher inflation?” MLI Senior Fellow Philip Cross examines the impact of Quantitative Easing (QE) on money and credit. And he raises some concerns about recent Bank of Canada policy and the risk of inflation.

As in 2008, many central banks are taking extreme measures to bolster the economy. Interest rates plummeted to historical lows and central banks expanded their balance sheets substantially. As Cross writes, there is legitimate worry of central banks “printing money” and risking the possibility of inflation.

A fundamental tenet of Quantity Theory of Money (QTM) is that money supply determines inflation. However, in the late 1970s, central banks targeted money supply growth to slow rampant inflation leading to a breakdown in the relationship between monetary growth and the economy.

When the economic shocks of 2008-2009 sent interest rates near zero, central banks quickly resorted to QE to stabilize the economy. Cross writes that QE involves central banks buying bonds, mortgages and even stocks, injecting money into financial markets and banks.

The experiment with QE in 2008 promised to boost output by raising the rate of inflation while remaining neutral on distribution. It failed to deliver on any of these promises. QE failed to trigger a surge in GDP, resulted in no generalized increase in prices except financial assets, and did not resuscitate the real economy. Indeed, its only lasting impact seems to have been long-term financial instability.

Fortunately, the Bank of Canada used QE much less than many of its peers during the 2008 financial crisis and over a shorter period of time, and it quickly reversed the rapid expansion of its balance sheets.

In the 2020 pandemic, however, the Bank pursued a different approach – by undertaking an enormous expansion of Canada’s monetary base as the annual growth soared from 3 percent to 300 percent during the pandemic.

"Interest rates were kept as low as possible while the government was providing emergency relief during the pandemic,” adds Cross. “While credit demand remains moderate, the money supply has expanded rapidly in recent months, unlike the recovery in 2009. And now there are signs of both rising prices and higher inflationary expectations.”

“If the rapid increase in central bank assets had unforeseen impacts on the money supply and the economy, how can central banks be able to predict and manage their reversal?” writes Cross. “The course of inflation over the next few years will be a test of whether current central bank theories of inflation hold or whether the Quantity Theory still has some explanatory power.”

To learn more about Canada’s rapidly expanding money supply, click the button below.

***
Philip Cross is a Munk Senior Fellow at the Macdonald-Laurier Institute. Prior to joining MLI, Mr. Cross spent 36 years at Statistics Canada specializing in macroeconomics.