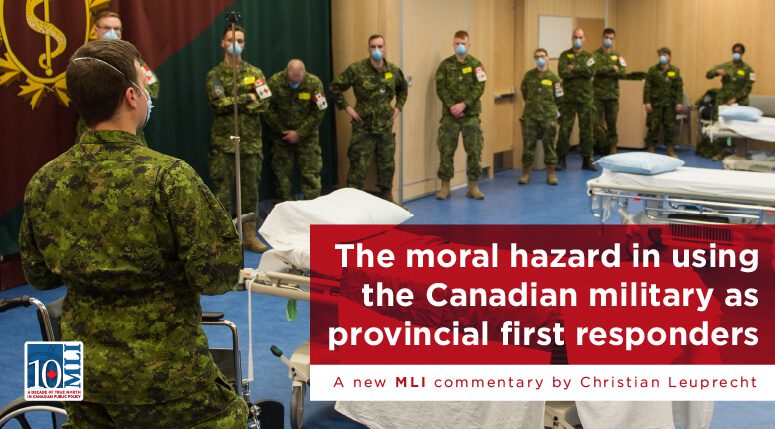 Ottawa, ON (December 8, 2020): For some provincial governments, the pandemic has effectively transformed the Canadian Armed Forces (CAF) into provincial emergency first responders. Yet this new responsibility will likely only further burden the Canadian military in the future.

In a new MLI commentary titled “The Moral Hazard in using Canadian Armed Forces as Provincial First Responders,” MLI Senior Fellow Christian Leuprecht argues that leveraging the CAF’s operational capacity to assist in emergencies has created a moral hazard which comes at a cost to the armed forces, its members, and taxpayers.

“After all, 55 members contracted COVID while serving in long-term care homes, an operation that cost $53 million dollars, while the total cost of the military’s overall pandemic response is approaching $500 million,” explains Leuprecht.

Responding to domestic emergencies is transforming into a new normal for the CAF. From 2010 – 2020, the CAF were deployed to 31 domestic operations; the frequency and size of these operations are only rising. Moreover, transport aviation to evacuate communities and airlift relief supplies and personnel is in high demand.

The increasing volume of domestic missions creates three problems, according to Leuprecht. First, by backstopping provinces that underinvest in emergency response capabilities, the federal government’s use of the CAF as a first resort – rather than the last – creates a moral hazard. Should the armed services have to deploy overseas in a crisis, CAF resources might well be unavailable for domestic operations – with potentially deadly results.

Second, the demands in Canada’s Federal Emergency Response Plan require solutions that the CAF is ill equipped to provide. While the CAF possesses significant operational resources, there is a lack of adequate resourcing of the civilian emergency management function in the federal government.

Finally, overreliance on the CAF fails to address a deeper, underlying problem. Specifically, how will the federal government surge general or semi-skilled labour in an emergency? Continuing to demand the use of the CAF is especially disruptive to the armed services’ combat training and readiness, potentially harming our military’s ability to achieve its crucial defence duties.

Leuprecht recommends that Ottawa consider alternative emergency response models that do not lean so heavily on the CAF. The best option may be for the federal government to reprioritize, along with a slight formal expansion of the CAF, to support its domestic role: create a combined capability of about 2000 Regular and Reserve Forces soldiers to aid in infrastructure in Indigenous communities and community deployment in the summer, which could be postponed or rescheduled if they were called out to a flood or wildfire instead.

“For Canada, the pandemic is thus an object lesson in military autarky. And it turns out that the organization has much to learn, and re-learn,” writes Leuprecht.