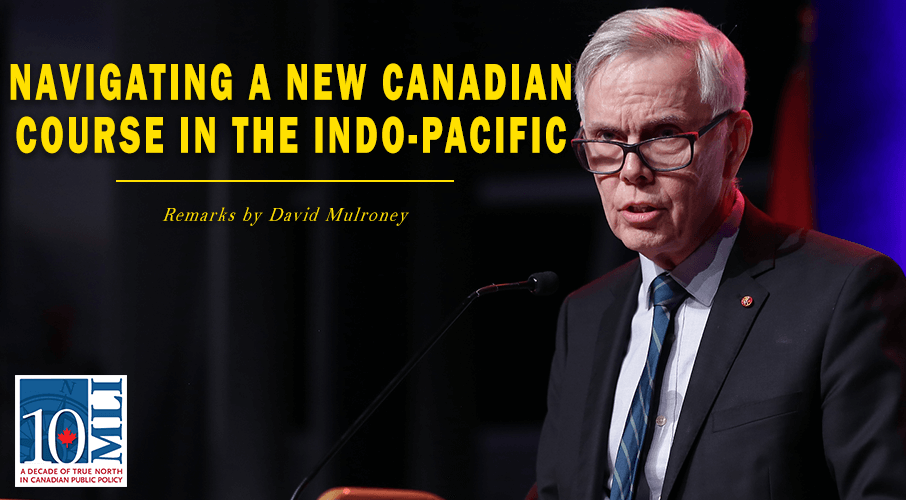 OTTAWA, ON (February 28, 2020): With a slow and rudderless policy toward the Indo-Pacific, Canada has failed to capture important opportunities and has been mired in challenges in the region. Former Canadian Ambassador to China David Mulroney is speaking out about Canada's policy failures, providing his thoughts on what should be done to engage with the region.

MLI’s latest commentary, titled “Navigating a New Canadian Course in the Indo-Pacific,” argues that this failure to launch a meaningful Indo-Pacific strategy has been damaging to Canada’s national interests. This commentary is based on Mulroney’s keynote remarks at MLI’s 2020 Annual Dinner.

To put it bluntly, 2019 was “a year during which Canadian foreign policy itself has been on trial,” according to Mulroney. In this case, the chief challenge facing Canada is that of China.  Unfortunately, “we’ve been shown, repeatedly and to our great cost, the dangers of a foreign policy that is largely reactive. Too often, our ‘comprehensive engagement’ of China has been an excuse for foreign policy on auto-pilot, in which we seem to go along to get along, and in which flattery often replaces facts.”

In this context, Mulroney makes the case for an Indo-Pacific policy that is less vulnerable to China’s authoritarian whims.

Instead of looking at the region through a China-centric lens, Mulroney encourages Ottawa to engage more actively and and substantively with our likeminded allies in the region, including Japan, South Korea, India, Australia, New Zealand, and Singapore.

As he goes on to explain, “a successful Canadian engagement of the Indo-Pacific region involves a lot more than spinning the globe and tweaking ministerial travel schedules.”

“Real foreign policy involves thinking clearly about who and what we are as a country, about a limited number of achievable objectives, about national assets and liabilities, and [more].”

In terms of concrete action, Mulroney believes that Canada’s Indo-Pacific strategy should be anchored in a network of strong, country-to-country relationships with our allies. For instance, he argues that Canada must invest more significantly in an expeditionary military capability so that we can support our allies and be seen as a credible security partner.

Canada cannot and should not exclude China from its engagement, but tackling the challenges posed by Beijing will require policy makers to change their strategy, opting for a selective, careful, and balanced approach that is “aligned with our interests and attuned to our vulnerabilities.”

The importance of this is hard to overstate. As Mulroney argues, getting Canada’s Indo-Pacific strategy right would “represent a first step in the direction of real foreign policy, of taking responsibility for navigating our Canadian course in a new world.”

To learn more about how Canada should navigate a new course in the Indo-Pacific, read the full remarks here.

David Mulroney is a Distinguished Fellow at the University of Toronto’s Munk School of Global Affairs and Public Policy. He served as Ambassador of Canada to the People’s Republic of China from 2009 to 2012.