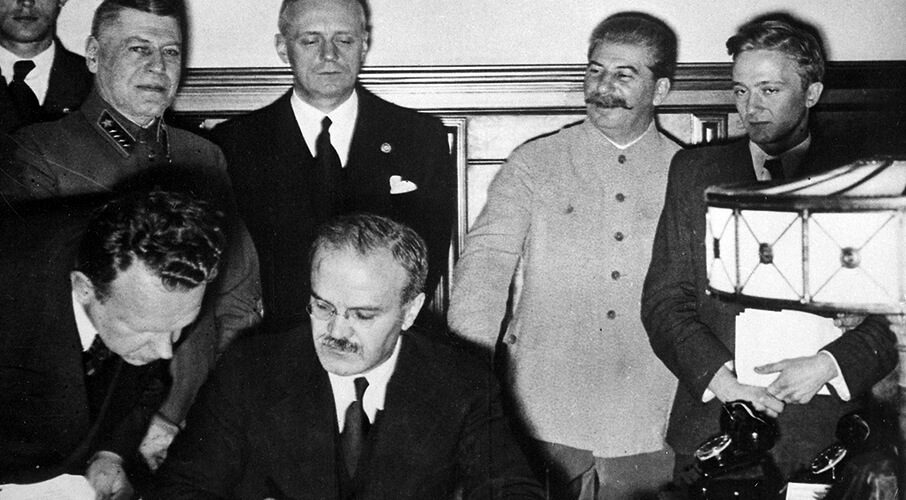 As Vladimir Putin and his Soviet predecessors have demonstrated, malign regimes like theirs seek to distort history and truth, in order to advance their interests and divide our communities. Marcus Kolga writes that Canadian political leaders and media must be alert to these efforts and avoid the risk of legitimizing and amplifying false historical narratives.

In Moscow, on the night of August 23, 1939, Josef Stalin and Adolf Hitler agreed to a non-aggression treaty, that coordinated the start of military aggression against Poland, triggering the start of WWII, the bloodiest period in human history. Secret protocols within the pact carved up Central and Eastern Europe, from Finland in the north to Romania in the south, between the Nazis and Soviets.

The event was once described by the late Christopher Hitchens, referencing the Harry Potter children’s books, as a “time when civilization was menaced by an alliance between two Voldemorts, or ‘You Know-Whos’.”

Days after signing the Nazi-Soviet Pact, Hitler’s armies invaded Poland from the west, followed shortly thereafter by the Soviet invasion in the East. When Soviet and Nazi forces met each other in the middle of Poland, they organized a joint victory parade to celebrate their conquest.

In a September 1939 editorial, The New York Times reacted to the signing of what’s become known as the Molotov-Ribbentrop Pact, suggesting that ideologically, the Nazis and Soviets were not that far apart stating that “Hitlerism is brown communism, Stalinism is red fascism.” Italian fascist leader Benito Mussolini shared that view, believing that Stalin had shifted the Soviet Union away from Bolshevism to a form of fascism in October 1939.

This unholy alliance between Stalin and Hitler was deeply unsettling even to Stalin’s former Bolshevik colleagues, who labeled the period following the signing as the “midnight of the century.” Just as Stalin airbrushed his Bolshevik rivals like Leon Trotsky from official historical photos, so too were historical textbooks and narratives altered to forget Stalin’s signing of the treaty with Hitler.

Vladimir Putin has renewed this Soviet strategy by creating his own interpretations of Soviet history, in order to deflect domestic attention away from a slumping Russian economy, endemic corruption, a failing war in Eastern Ukraine, growing dissatisfaction among Russian youth, and growing pro-democracy demonstrations in Moscow.

For the Kremlin, the Nazi-Soviet Pact conflicts with the official Russian government narratives crafted by the Putin regime, of Stalin as a hero. As such, Putin has overseen an aggressive rehabilitation of Stalin’s bloody legacy, and the rewriting of history to officially erase dangerously inconvenient historical facts, such as the Nazi-Soviet Pact.

A worrying example of this is the annual revival of Soviet Victory Day each May, when events are organized to celebrate Soviet military power and the occupation of much of Central and Eastern Europe. At a 2015 Soviet Victory Day rally in Toronto, the flags of nations occupied and terrorized by the Soviet Union were proudly displayed like trophies. The Soviet era, messianic visage of Josef Stalin — who by conservative estimates was responsible for killing 30 million people — was emblazoned on T-shirts and posters at the rally.

News and images of rallies like those organized in Toronto are fed back to Russian state media where they are filtered by state propagandists to further promote a heavily produced understanding of Soviet history. The 2019 Victory Day parade in Toronto, for example, was misreported by Russian state media as having thousands of participants, while real images on Facebook show a few hundred at most.

For the 4 million Canadians of Central and Eastern European heritage, the Kremlin’s historical propaganda stirs deeply embedded fears that are rooted in the traumatic experiences of family members who fled Nazi and Soviet terror during and after the war. For them, the Soviet occupation is a disturbing reminder of arrests, murder, torture and forced deportations to distant gulag slave labour camps from which few ever returned.

The families of these Canadians fled their homes, families and lives, usually with little more than a suitcase and the clothes on their backs in order to escape the relentless, oscillating, waves of Nazi and Soviet terror.

In Canada and many other western nations, including the European Union, the memory of the victims of Nazi and Soviet terror, and the truth about the signing of the Hitler-Stalin pact, has been preserved by recognizing August 23rd as an official day of remembrance, known as Black Ribbon Day.

As Vladimir Putin and his Soviet predecessors have demonstrated, malign regimes like theirs seek to distort history and truth, in order to advance their interests and divide our communities. Canadian political leaders and media must be alert to these efforts and avoid the risk of legitimizing and amplifying false historical narratives, by ignoring and rejecting them.

Marcus Kolga is a digital communications strategist, writer, filmmaker and expert on foreign disinformation and Russian affairs. He is a Senior Fellow at the Macdonald-Laurier Institute’s Centre for Advancing Canada’s Interests Abroad. Kolga is an organizer of a conference on the Nazi-Soviet Pact, featuring Russian chess grandmaster Garry Kasparov, that will be held on Sept. 12 at the University of Toronto. Find out more by clicking here.