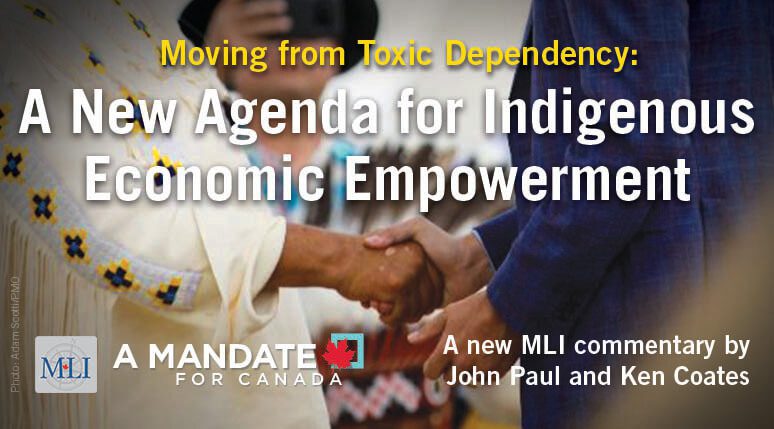 OTTAWA, ON (July 18, 2019): With a federal election approaching, politicians and policy-makers must re-evaluate Indigenous policy. Financial transfers and program spending are not helping First Nation communities get ahead. The status quo of Indigenous living standards and quality of life is not acceptable to Indigenous peoples or to Canadians as a whole. Clearly, a new fiscal and governing approach is needed.

The paper, titled Moving from Toxic Dependency: A New Agenda for Indigenous Economic Empowerment, explores how the postwar expansion of the welfare state led to an exponential increase in program spending on Indigenous peoples, but resulted in little obvious improvement in living standards. In fact, even with increased funding, First Nations communities have seen an increase in many social problems and pathologies.

“The soul-destroying, dependency-creating reliance on the federal government has not been a foundation for Indigenous revitalization and socio-economic development,” write the authors. “The evidence from the past 50 years suggests that government spending does not produce the desired results.”

“Make no mistake: money is required. It will take more money, even much more money, to address generations-long problems and challenges. It is not the funding per se that is the problem, but rather the way the money is delivered to Indigenous communities and governments,” write Paul and Coates.

The authors make the case for a healthy autonomy for First Nation governments, drawing upon the well-documented insight that increased sovereignty is the way forward for addressing First Nation problems. Key elements of a new approach could include:

The issues facing Indigenous communities in Canada vary and are complex. While these recommendations will not fix all of the issues present, Coates and Paul argue that this new agenda is necessary to set economic empowerment back on track.

Ken Coates is MLI’s Munk Senior Fellow in Aboriginal and Northern Canadian Issues. He is the Canada Research Chair in Regional Innovation in the Johnson Shoyama Graduate School of Public Policy at the University of Saskatchewan. John Paul is the Executive Director of the Atlantic Policy Congress of First Nations Chiefs Secretariat in Dartmouth, Nova Scotia.