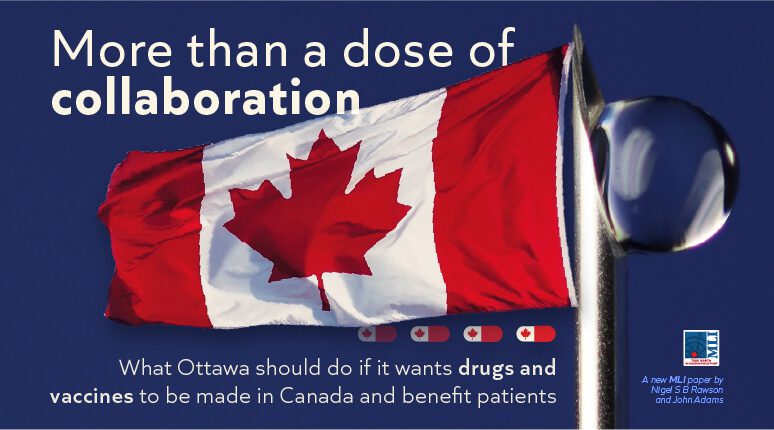 OTTAWA, ON (June 3, 2021): The COVID-19 pandemic has unmasked a dangerous lack of investment in pharmaceutical and vaccine research, development, and manufacturing in Canada. Despite the Liberal government’s attempts to repair this damage and “re-establish” Canada as a leader in drug and vaccine production, new federal regulations risk hindering innovation.

In a new MLI paper titled, “More than a dose of collaboration: What Ottawa should do if it wants drugs and vaccines to be made in Canada and benefit patients," authors Nigel Rawson and John Adams delve into how proposed federal regulations designed to slash drug prices would not only be unsustainable, but would further thwart innovation in the already-beleaguered Canadian biopharmaceutical sector.

If the pharmaceutical industry is forced to take another hit, it would damage Canada’s capacity to develop and gain access to new medicines, such as vaccines and rare disease treatments. As Rawson and Adams write, “significantly reducing drug prices might save money for government drug plans, but it will be at the expense of patients suffering without their health needs being met and dying prematurely.”

Changes to the Patented Medicine Prices Review Board (PMPRB) are planned to take legal effect in July 2021. This little-known tribunal sets price ceilings for patented medicines, and new regulations would see price drops of up to 60 percent for some drugs. Not only is this unsustainable, but it will further deter developers from launching new medicines in Canada.

Innovative biopharmaceutical companies will face an increase in the many existing barriers that governments use to reduce their costs at the expense of investment and access to new drugs.  These barriers include the lack of globally competitive intellectual property protection for innovative medicines, and inhospitable government-controlled health technology assessment and price negotiation organizations.

The imminent regulations have already chilled the landscape for manufacturer-funded late-stage clinical trials and new drugs in Canada. This could mean some drug developers will see Canada as a less viable market and therefore leave the country, while others may downsize their Canadian investment.

“Officials in Ottawa have blithely and falsely denied the negative impact of the new PMPRB regulations,” argue Rawson and Adams.

Instead of further damaging the sector through price controls, the authors propose a less antagonistic and more collaborative approach between Ottawa and the innovative biopharmaceutical industry. This would have the potential to deliver significant value, not only to the health care system, but to the economy overall. Canadians will also gain earlier access to new medicines, vaccines, and biopharmaceutical therapies, which is a crucial priority for both COVID-19 vaccines and patients more broadly.

According to Rawson and Adams, “if Ottawa is serious about stimulating biopharmaceutical research and manufacturing to establish Canada as a leader in drug and vaccine development and production, it must do much more to create a constructive working relationship with drug and vaccine developers to build a secure domestic industry.”

***
Dr. Nigel Rawson is a pharmacoepidemiologist and pharmaceutical policy researcher in Saskatoon.

John Adams is a seasoned management consultant with a current focus on advocacy for unmet patient health needs.