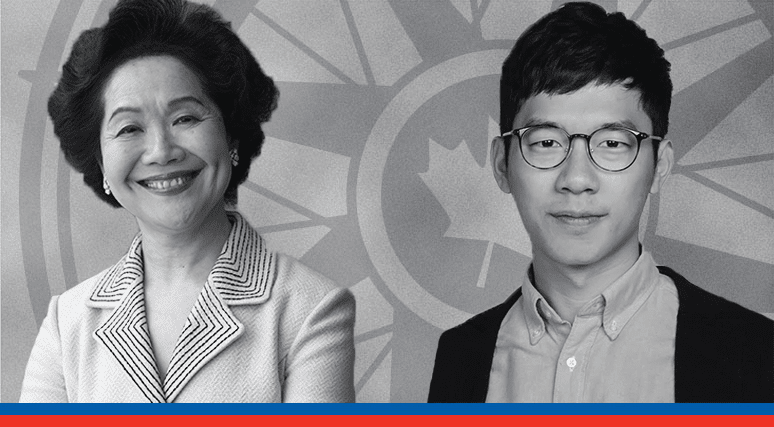 OTTAWA, ON (August 23, 2019): In order to support the Macdonald-Laurier Institute’s ongoing thought leadership on Canada’s responsibility towards Hong Kong, MLI is pleased to announce that Nathan Law and Anson Chan have joined the Institute.

Law will serve as MLI’s Ambassador on Canada-Hong Kong Policy, and Chan will be joining the Institute as a Distinguished Fellow. Both Law and Chan will build upon and expand MLI’s growing body of work surrounding Hong Kong.

Beyond her impressive governance experience, Chan has served as an independent elected member of Hong Kong’s Legislative Council. She is an active promotor of transparency, accountability, democracy, and good governance within the territory. In addition, she serves as the Convenor of Hong Kong 2020 which advocates for full universal suffrage, and the Project Citizens foundation, promoting youth civic engagement.

“We are incredibly honoured to be welcoming Mrs. Anson Chan to the Institute,” said Dr. Crowley. “Her unparalleled knowledge and expertise will be of great value to all Canadians who are concerned with the rights and freedoms of Hong Kongers.”

Although only 26 years old, Law is already among Hong Kong’s premier civic leaders.  He is perhaps best known for his activism as a leader in the 2014 Umbrella Movement, eventually becoming elected to serve as Hong Kong’s youngest lawmaker in 2016. Law was later disqualified from office as a result of unprecedented and anti-democratic manoeuvring from pro-Beijing elements within the territory’s government.

Along with other democracy advocates, Law was imprisoned in 2017 for his peaceful role in the Umbrella Movement. Despite consistent pressure from those who would seek to undermine Hong Kong’s democracy and liberties, Law remains steadfast in his activism. Law was nominated for the Nobel Peace Prize in 2018, and is studying at Yale University.

“It is with great enthusiasm that we are welcoming Nathan Law to join our growing team,” said MLI Managing Director Dr. Brian Lee Crowley. “His bravery and civic leadership has already made a meaningful difference not just in Hong Kong, but indeed, the world over.”

Law’s and Chan’s work will focus on promoting awareness regarding Hong Kong’s imperilled liberty, highlighting the importance of the territory and why all Canadians ought to care about Hong Kongers’ fight to maintain their freedom. With more than 300,000 Canadians living and working in Hong Kong, and with an increasingly belligerent government in Beijing, this issue is now as important as ever.

Canada endorsed the 1984 Joint Declaration which set the framework for Hong Kong’s transfer from the UK to China under the “one country, two systems” framework. As a party in principle to the agreement at both Beijing’s and London’s requests, Canada’s voice ought to be loud and clear when it comes to calling on Beijing to respect the agreement. To that end, Law’s and Chen’s involvement with MLI will provide an invaluable contribution to the national and global conversation.