No one will win Trump’s fight between the US and Canada: Laura Dawson in the Washington Post 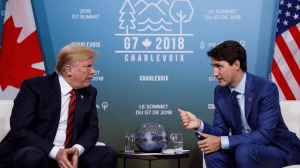 Everyone loses a trade war between neighbors, writes Laura Dawson.

Why did President Trump go after Canada in such a dramatic way after leaving the Group of Seven meeting in Quebec? Perhaps he wasn’t aware until he boarded his jet to leave that Canada had, two weeks prior, announced retaliatory tariffs to counter his preposterous claim that Canadian steel and aluminum threatened U.S. national security. Perhaps, as White House economic adviser Larry Kudlow suggested over the weekend, attacking U.S. allies was a good way to show that the United States is a force to be reckoned with as Trump headed to Singapore to meet with North Korean leader Kim Jong Un.

But lashing out at Canada is a bit like slapping your grandmother. She probably won’t hit you back, but it’s not very satisfying and nobody respects you much afterward. Politically, a trade war with Canada provides little red meat for Trump’s base, because 99 percent of trade with Canada is already tariff-free. Also, it invites Republicans and Democrats from states such as California, Ohio, Maine and Arizona, where livelihoods depend on trade, to openly oppose the White House. Rather than thanking the president for delivering new levels of prosperity, manufacturers and exporters from states such as Wisconsin are staggering under increased costs for imported inputs and lost markets for exported food and finished goods.

Meanwhile, in Canada, rather than making Prime Minister Justin Trudeau look weak, Trump’s tweetstorm provided his foil with a domestic “Trump bump,” uniting politicians from all parties to condemn the attacks against their nation and its leader. That’s not to say the Charlevoix drama and the months of political theater surrounding the NAFTA renegotiations have been costless for Canadians. Nor will they be costless for Americans.

The Bank of Canada has already lowered its estimate for Canadian business investment and exports through 2020 by 3 percent and 1.5 percent respectively due to NAFTA-generated uncertainty. Investors will keep their hands in their pockets until North America figures itself out. That means the dispute will hurt U.S. workers, too. Canada is the largest buyer of U.S. exports — more than Britain, China and Japan combined. A weaker Canadian economy translates into reduced Canadian demand for U.S. products. In the world of marketing, abusing and insulting your largest customer is seldom a recommended practice.

U.S. national-security tariffs on steel, aluminum and the auto sector will have an immediate and punitive effect on Canada and a spinoff effect on U.S. manufacturers and supply chain partners. Canada is counting on its U.S. business partners to make the case to U.S. decision-makers, but as a small economy of 34 million people, Canada might not be able to go on bleeding until Trump sees reason.

The economic implications of the trade war are bad, and fighting it out under a political spotlight makes resolution in the near term very difficult. But Canadian and American leaders have feuded before, and they will do so again. John F. Kennedy made no secret of his dislike for the Conservative curmudgeon John Diefenbaker, who refused to break ties with Havana during the Cuban missile crisis. There was no love lost between Ronald Reagan, the Hollywood actor, and Pierre Trudeau, the smug intellectual (and Justin’s father). Perhaps the greatest blowup in recent memory was when Lyndon B. Johnson accused Lester B. Pearson of “pissing on my rug” after Pearson publicly criticized U.S. airstrikes in Vietnam.

Lashing out at Canada is a bit like slapping your grandmother. She probably won’t hit you back, but it’s not very satisfying and nobody respects you much afterward.

Ultimately, the U.S.-Canada relationship is resilient and deep. It is recognizable in hundreds of thousands of connections embedded in the shared fabric of family, culture, education, sports, scientific discovery, public health and defense of our territory. The best of this relationship is seen in the instinctive response whenever the other is threatened: Think of Canadian Ken Taylor and the Iran hostages, Newfoundland’s care of stranded 9/11 passengers and the thousands of Canadian travelers who have sought shelter at U.S. embassies in hostile environs where no Canadian mission is available.

Still, the most recent attacks by Trump and his advisers will not be easy to shrug off. Canadians are hurt by the implication that they are a security risk after having fought shoulder to shoulder with Americans on the beaches of Normandy and the mountains of Afghanistan and maintained, for 60 years, a joint North American aerospace defense alliance (NORAD) that is the unparalleled in the world. Salutary gestures like the #ThanksCanada Twitter campaign that affirm the importance of maple syrup and Joni Mitchell to the American way of life are nice, but they don’t change the fact that the current U.S. government no longer trusts — or even likes — its neighbors. While France, Britain and Germany have also been targeted by U.S. trade actions, the effects are more directly felt by Canada and Mexico because we share a territory and an economy. Every day, nearly half a million people cross the Canada-U. S. border, and more than a million dollars a minute in trade passes between the two countries. As many as 9 million U.S. jobs depend on trade with Canada.

Canadians will hunker down and hope their economy survives the latest bump in the relationship. They take quiet, Canadian-like pride in the fact that there are eight Canadians among the Washington Capitals players who hoisted the Stanley Cup down Constitution Avenue on Tuesday (and zero North Koreans). But where shots across the fence are the most damaging are in their impact on North American competitiveness. The rest of the world is not standing still while we feud. China, Russia and others who do not share our values are moving in to fill the void. North America’s strengths of abundant energy, resources and human ingenuity were amplified by U.S. leadership in the global trading system. In the absence of that leadership, North America loses its competitive position in the world.

The lesson that has failed to reach the White House is that the United States does not grow stronger when it attacks the neighbors. Instead, everybody in the neighborhood is made worse off.

(Image source: Office of the Prime Minister of Canada)