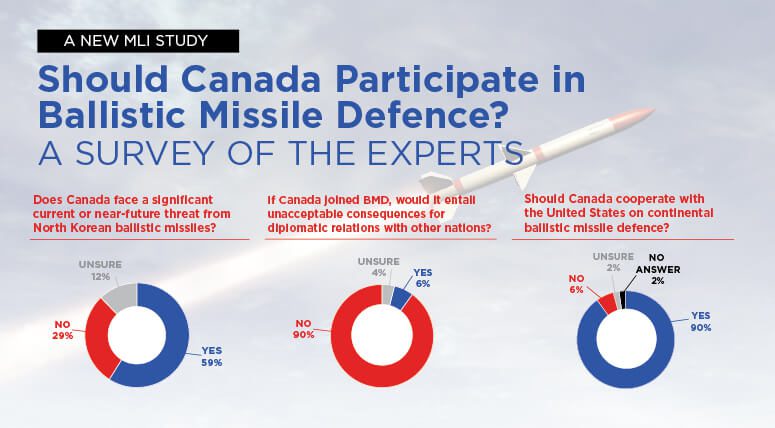 OTTAWA, ON (July 9, 2018): The question of Canada’s participation in ballistic missile defence (BMD) has recently returned to the forefront, but unlike previous debates over the issue, the circumstances are very different. With an increasingly disengaged American president and new threats posed by countries like North Korea, is it now time for Canada to reconsider participation in BMD?

To better ascertain the wisdom of such a decision, MLI undertook a survey of leading experts on defence policy and ballistic missile defence. As described in the new MLI report, titled Should Canada Participate in Ballistic Missile Defence?, the survey revealed an important expert consensus on the value of cooperating with the United States on BMD to protect North America.

Authored by Jeffrey Collins, this report takes an independent, dispassionate, and expert approach to assessing the merits of Canada’s participation in BMD. MLI’s survey asked participants seven important questions, including the nature of the threats facing Canada and the impact of BMD participation on Canada’s other foreign policy objectives.

The results are clear: over 90 percent of respondents are in favour of Canadian participation in continental BMD. This shows a strong consensus among the 49 experts surveyed on the need to directly participate with the US on BMD.

“In short, the respondents generally indicated that a defence system that limits damage in North America is one worth investing in,” writes Collins.  “It is time for Canada to cooperate with the United States on BMD.”

Canada does not currently have the ability to defend itself for ballistic missile threats – and any protection afforded by the current US BMD system remains highly uncertain. As noted by Collins, “Canada remains largely alone among our major allies in not directly participating in some form of BMD.” Ottawa should reengage in “discussions with our American counterparts on the possibility of participating in the continental BMD system.”

With a US President increasingly perceiving alliances as transactional, Canada stands to gain some significant capital by formally cooperating with the US on BMD. Participation in BMD could assuage the Trump administration’s growing concerns over our modest defence spending, while strengthening the defence relationship with our closest ally. It would also ensure that the Canada-US alliance remains salient to the evolving threat environment for many years to come.

To learn more about why now is the time for Canada to reassess its involvement in a continental BMD strategy, read the full report here.

Jeffrey F. Collins is a fellow at the Canadian Global Affairs Institute, as well as a research fellow with the Centre for the Study of Security and Development at Dalhousie University, and the University of Manitoba’s Centre for Defence and Security Studies. He is an experienced policy advisor and is the co-editor of the book Reassessing the Revolution in Military Affairs: Transformation, Evolution and Lessons Learnt.