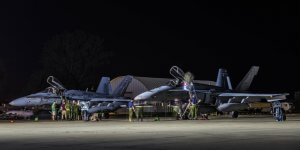 OTTAWA, ON (October 11, 2018): The Canada-US relationship has been front and centre in public view over the past year, with trade disputes and contentious renegotiations around NAFTA, which was successfully concluded in the renamed United States-Mexico-Canada Agreement. So far, the bilateral security relationship has largely escaped scrutiny.

Yet, as outlined in a new MLI commentary by Senior Fellow Richard Shimooka, the Royal Canadian Air Force (RCAF) faces serious challenges when it comes to personnel management, procurement, and capabilities that may threaten the relationship in the future.

The most immediate problem is the retention of experienced pilots and support staff. As Shimooka notes, “over 63 percent of operational squadrons are understrength, with the RCAF pilot capability about 16 percent below strength and the fighter force at least 20 percent short.”

Compounding this retention problem is the botched procurement process for a CF-18 replacement. According to Shimooka, “The new Liberal government’s decision to restart the entire process exacerbated the already precarious retention situation, tipping the balance against pilots staying.”

Of particular concern was the Liberal’s government’s decision to pursue an interim fleet of Super Hornets. This was heavily criticized, not least in a 2017 MLI paper that detailed an expert consensus against the proposal. And, shortly afterwards, the government reversed course and opted instead to procure a number of retiring Australian F/A-18As.

Given the problems of aging airframes and pilot retention, the RCAF faces diminishing interoperability and operational relevance to the US Air Force for both domestic and expeditionary operations. As Shimooka concludes “US force planners must now weigh the value of the CF-18 when considering future operations.”