Pipelines and National Prosperity under the St-Laurent Government: Ken Coates for Inside Policy 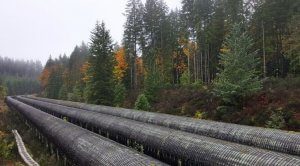 Canada has lost, as a nation, the “can-do” spirit that exemplified the St-Laurent years, writes Ken Coates. We need a better sense of urgency, possibility and optimism.

The regional pipeline debates of the 2010s – Northern Gateway, Keystone XL, Trans Mountain, Energy East, Line 3 (Enbridge), and Coastal GasLink, among others – have shaped Canadian national political affairs in complex ways. The people of Alberta and Saskatchewan remain angry and disappointed with Ottawa’s approach. For its part, Justin Trudeau’s government sought, without success, to purchase social licence for pipelines through its expansive climate change agenda and its highly reluctant purchase of Kinder Morgan’s Trans Mountain project. The result has been a nation bitterly divided and with a substantial portion of the national economy at stake.

Highly contentious pipeline debates are not new in Canada. In the 1950s, the government of Louis St-Laurent threw its support behind the proposed TransCanada Pipeline. Under the guidance of the influential cabinet minister, C.D. Howe, the government helped assemble a group of Canadian and American partners to build an all-Canadian pipeline to ensure the supply of natural gas from Western Canada to Eastern Canada. A parliamentary clash unfolded in 1956, when the Co-operative Commonwealth Federation (CCF) and the Progressive Conservatives attacked the Liberals for trying to force through the contentious legislation. The St-Laurent government went into the 1957 election with the burden of the pipeline approval process symbolizing their alleged arrogance.

Canada got its pipeline, which opened in 1958, but the Liberals fell from power the previous year. In 1958, John Diefenbaker and the Progressive Conservatives secured one of the largest electoral majorities in Canadian history. The Liberals lost their hold on government because, in the eyes of many in the country, they had succumbed to the arrogance of power. By forcing through the legislation that enabled the development of the TransCanada Pipeline, the Liberals irritated the parliamentary opposition and angered electors who demanded a more responsive government.

Before the 1956 pipeline debate, the confidence and decisiveness of the federal Liberal government had served the country well. They were able to push through major projects that transformed the country dramatically. But the line between assertive and arrogant government is a thin one, particularly when issues related to major infrastructure, natural resource development, and Canada-US relations were at play. The legacy of post-war expansion proved to be profound, sparking an equally bold plan by the Diefenbaker government to promote major developments in the middle and far North.

In the 1950s, Canadian governments got things done. The opposition to the Liberals’ plan was more about how the Liberal government proceeded than over the idea of the pipeline. The CCF fought for public ownership of the pipeline; the Tories worried about American influence over a key piece of Canadian infrastructure. In the post-war period, however, pipelines were but one part of a major expansion in national infrastructure that included major highways, airfields, hydro-electric plants, and the St. Lawrence Seaway. In short order, with pipelines figuring prominently in the evolving landscape, the country launched a major expansion of resource development in the middle North, the development of key national roads and other facilities, and a rapid improvement in the country’s standard of living.

There are important similarities in the situation facing Canada’s post-war government and the government today. Just as the Second World War liberated Ottawa to spend public funds freely, the 2020-2021 pandemic freed the Trudeau government from almost all budgetary constraints. The government of Louis St-Laurent enjoyed widespread support in Canada, with a mandate to rebuild after the war and avoid a widely feared return to the Great Depression. The plans were grandiose, especially in the context of the late 1940s and 1950s, and included public housing initiatives, major urban developments, and the infrastructure needed to sustain the modern industrial state. Contemporary Canada reveals the long-term benefits and consequences of the major public investments and the combined government and private sector commitment to modernizing the country.

Following the Second World War, and much like Canada in 2021, federalism had tipped to the national government. While the post-war era would eventually see the empowerment of Quebec, Ontario, Alberta and British Columbia, it took some time for the provinces to gain comparable authority to the federal government. In the interim, as in 2021, the fiscal power rested with the Government of Canada, and Louis St-Laurent capitalized on this fiscal authority and the convening power of the national government to press for rapid economic development.

Canadians also forget that, in the late 1940s and the decade that followed, Canada lagged well behind the United States in wealth and opportunity and lacked a great deal of basic infrastructure. St-Laurent, more pragmatist than poet, did not paint a grand portrait of the nation he envisioned, and he avoided simple statements or characterizations of the country’s challenges. He sought to mobilize private investment more than make open-ended commitments of government funding. He was, ultimately, both cautious and effective in his promotion of the business of building a stronger and more economically robust country.

There is no such bold vision in Trudeau’s Canada in 2021, save for vague rhetoric such as “build back better” that underlie the nation’s uncertain plans for future development. The government is willing to spend vast sums of money but has difficulty finding projects to support that can be rolled out expeditiously. Yet there is no shortage of real and urgent needs, ranging from rural and northern Internet, much-needed road and rail systems in northern Canada, urban transit systems to match those of the world’s greatest cities, renewable energy projects, experimental investments in the resource and energy sectors, low-cost housing systems, and appropriate commitments to the facilities required to support a 21st century innovation economy.

Obviously, however, the 1950s and the 2020s are different worlds. After the Second World War, the western world rallied behind a peacetime recovery that ushered in the greatest economic expansion in world history. Canada, as a provider of raw minerals to a rapidly industrializing world, was a primary beneficiary of America’s growth and the rebuilding of Europe and East Asia. This growth happened without the intervention of environmentalists, who had not yet articulated a critique of industrialization. Indigenous peoples were not consulted, nor were they included in the massive development plans. Approval plans were, by the standards of the 2020s, rudimentary and superficial. Ultimately, however, much of the contemporary infrastructure that underpins contemporary Canada was developed in the first decades after the war.

Supporters of 21st century infrastructure projects look back on the St-Laurent era with considerable wistfulness. Contemporary political and approval processes are cumbersome, expensive and unpredictable. Companies venture into the development of a major project with considerable nervousness, knowing the fate of projects like the Mackenzie Valley Pipeline or Enbridge’s Northern Gateway, but aware, too, of the dozens of major mines, hydro-electric projects and other significant infrastructure investments that have proceeded through to completion. Furthermore, Indigenous communities – almost completely ignored in the immediate post-war period – find themselves in prominent, court-supported positions in the approval and development of infrastructure projects.

The current realities facing developers in Canada are more time-consuming, costly, complex and beneficial than those that shaped decision-making, investments and government actions in the post-war era. But the idea that the country does not get anything done is wrong, just as is the often-made suggestion that the empowerment of Indigenous peoples would lock down natural resource development. In the complex realities of the 21st century, we confront a new world marked by the economic uncertainties of the pandemic and post-pandemic world, the transformative effects of rapid technological changes, and the rise of a new authoritarian superpower, which has not been shy in flexing its newfound economic and military muscle, including through Chinese-funded infrastructure under construction in many parts of the world. In such an environment, the bold, confident national leadership exemplified by Prime Minister Louis St-Laurent is urgently required.

As Canadians contemplate the challenges facing the Canadian government in 2021 and beyond, we should reflect on the circumstances under which the St-Laurent government operated. The world was recovering from a devastating global war while struggling to come to terms with the Cold War. The spectre of a massive worldwide depression remained both a vivid memory and a real danger, with the fear of economic uncertainty worrying many people and governments. This, too, was an era of massive technological change, exemplified by jet and space travel, a revolution in consumer electronics, new and expanding communications technologies (particularly television), the advent of the nuclear era (with all its attendant existential dangers), and the early years of major societal transformations.

Canadians sought – and got – stability, with a practical and effective government that was free of nationalistic rhetoric. The nation benefitted from surging international demand for Canadian natural resources, which in turn spurred economic expansion in the middle North. The government, too, built from its central Canadian base, using major government investments to improve the infrastructure and economic prosperity of southern Ontario and southern Quebec.

Louis St-Laurent understood well the concerns of a nation that was proud of its many contributions to the Allied war effort, recognized the industrial system transitioning from wartime to peacetime operations, and understood the gathering power of the resource-rich western provinces. St-Laurent had a vision for a nation in need of rapid transformation and improvements, able and ready to capitalize on the potential of the post-war era. Yet the same cannot be said of the Trudeau government today, which has struggled to effectively govern throughout its tenure in power.

While displaying a strong willingness to spend without much constraint, especially in the midst of a pandemic, the Trudeau government has proven far less adroit at using this financial largesse to actually get things done expeditiously – from infrastructure and energy projects to domestic vaccine production. It has also proven unwilling to work closely with the private sector to fill many of the urgent needs facing the country in the 21st century. It would behoove the current government to look back at St-Laurent’s legacy, and to remember that vague rhetoric like “build back better” is no substitute for doing the hard work that governing requires.

Prime Minister Louis St-Laurent has largely faded from the Canadian imagination. He was a manager more than a charismatic leader, but he guided the country through a time of remarkable and intense transition, and he did so with a calmness and grace that has largely disappeared from the Canadian political landscape. He was Prime Minister during a period of multi-faceted pressures for change, ranging from rapid industrialization and the Cold War to the dramatic growth of cities and a sharp increase in the national standard of living. St-Laurent’s tenure was a time when Canadians grabbed onto bold visions, particularly in terms of infrastructure and when government focused on getting the fundamentals of the Canadian economy right. Much of the prosperity that Canadians now take for granted was rooted in the St-Laurent years.

In the early decades of the 21st century, Canadians have become used to the idea that major projects are extremely difficult, if not impossible. Early infrastructure developments, including the TransCanada Pipeline project, attracted considerable response, even protests, but governments of the day pushed forward and got the work done. Canada has lost, as nation, the “can-do” spirit that exemplified the St-Laurent years and has become extremely cautious, even nervous, about tackling nation-building enterprises, draining the country’s sense of urgency, possibility and optimism. Remembering the work of St-Laurent’s government reminds us of the fundamental and multi-generational importance of national investments in infrastructure and the contributions that these bold decisions make to Canada’s long-term prosperity.

Ken Coates is a Munk senior fellow at MLI.