Policy-Maker of the Year: Chrystia Freeland 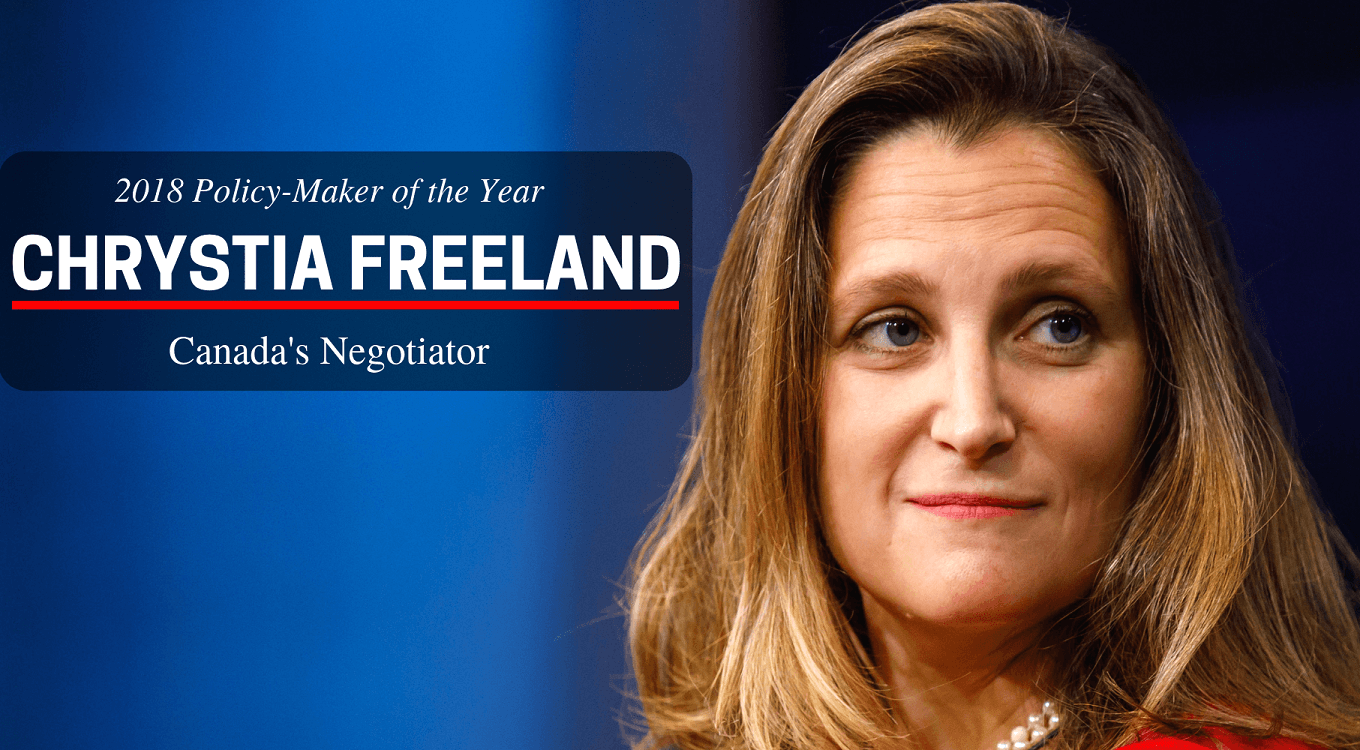 Prime Minister Justin Trudeau’s mandate letter to Minister Freeland in early 2017 asked her to “restore constructive Canadian leadership in the world” and “promote Canada’s interests and values.” She has her detractors, but the hard-earned medals in her stoic, principled war chest make it hard to deny she’s working toward that goal, writes Jennifer Campbell for Inside Policy.

One week after Canada and the US signed a deal that would save the North American Free Trade Agreement, Canadian Foreign Minister Chrystia Freeland invited her American counterpart, US Trade Representative Robert Lighthizer and his deputy, C.J. Mahoney, to her home in Toronto’s well-heeled Summerhill neighbourhood for dinner. Also invited was Canada’s ambassador to the US, David MacNaughton.

When the trio of powerful guests walked in, they were greeted by an apron-clad Freeland, who was not only entertaining them in the home she shares with her husband, New York Times writer Graham Bowley, and their three children, Natalka, Halyna and Ivan, she was also cooking the dinner. On the menu? Alberta beef, of course, cooked by a native of Peace River, Alberta. No reports on whether there was any now-less-protected Canadian dairy on the plate.

“She certainly doesn’t put on airs or anything,” says MacNaughton, of his visit to Freeland’s busy family home. “It was just the two of us [MacNaughton and Freeland] and the two of them [the American officials], her kids, her aunt and her husband. And she cooked.”

Asked whether the Mexican officials were invited, MacNaughton candidly replies, “I think their invitation got lost in the mail.”

The new NAFTA, the US-Mexico-Canada Agreement, is Freeland’s crown jewel in a policy portfolio that also includes: calling Venezuela to account for its crumbling democracy and applying sanctions against Maduro supporters; spearheading, adopting and using the Sergei Magnitsky law, which authorizes the government to impose asset freezes and travel bans on human-rights abusers around the world; saving and resettling some of Syria’s White Helmets, a Western-backed volunteer organization credited with saving hundreds of thousands of lives in the Syrian civil war; advocating and practising a feminist foreign policy in practical, non-rhetorical ways; being the first Western leader to call what’s happening to the Rohingya in Myanmar a “genocide”; carefully balancing the Israel-Palestinian file such that both parties respect her; and making it clear to Saudi Arabia that Canada isn’t going to pussyfoot around when it jails Canadians for political reasons and allegedly kills dissidents.

And she’s done all of this with an uncommon steadiness, her fans attest. While she was deeply angry with the Mexicans, who negotiated a side deal with the US that could have cut Canada out of NAFTA, Minister Freeland has maintained a good relationship with Mexican Economy Minister Ildefonso Guajardo, according to MacNaughton. Not to say there weren’t rocky moments.

“That negotiation was a real grind for 18 months,” MacNaughton says, adding that it’s rare for Freeland to lose her temper. Most politicians he’s known shout and “use bad language,” whereas Freeland’s reaction is more of a “slow burn.” Referring to a late summer conversation with the Mexicans after they threw Canada to the wolves, he says she was “extraordinarily direct.”

“She was calm; she didn’t raise her voice, but they had no doubt at the end of it that they’d just been given quite the lecture. She’s forceful. She doesn’t hold a grudge, but she doesn’t forget.”

MacNaughton says during the negotiations, there was a lot of cross-pressure on the Canadians.

The Americans were hard bargainers, and there was plenty of rhetoric about Freeland and why she was being so tough. “She didn’t let any of that get to her. We had a game plan we’d agreed to and we stuck to it. She was very focused and disciplined.”

Regarding US President Donald Trump’s tweets about her, MacNaughton said they expected that distraction and she “just let it roll off her back. That’s part of [her] style. You can’t let that sort of thing get to you.”

MacNaughton also said he admires her intellect and that she’s not content to just understand policy issues at the 30,000-foot level. In the trade deal, she dug deeply on complex issues such as rules of origin and intellectual property.

“One of our top negotiators said they’d never worked with a minister who actually understood all the details,” MacNaughton says, adding that her outreach to stakeholders – original equipment manufacturers (OEMs), auto parts and dairy interests, provincial representatives and her NAFTA advisory board – was remarkable and her energy level is “phenomenal.”

He calls her a woman of strong – always informed – opinion, but he says she’s a good listener who’s open to other, even opposing, opinions.

Equally comfortable at state dinners and camping with her family in the Rockies, the minister travels by bike between her home and her Toronto office. She’s unassuming but also unabashed in her brand of principled foreign policy, something retired MP and human rights activist Irwin Cotler lauds.

“She’s been an exemplary foreign minister and a leading global voice for a rules-based liberal international democratic order,” Cotler says. “Not only in her words, but in her deeds.”

He credits her with passing the Magnitsky legislation, which he introduced as a Liberal MP in opposition, named after murdered Russian lawyer, Sergei Magnitsky. “It was her moving it through Parliament that resulted in us adopting it, then sanctioning Russians, Venezuelans and South Sudanese,” he says. At the G20 in early December, she announced that 17 Saudi Arabians would be sanctioned, too.

Marcus Kolga, a filmmaker, human rights advocate and Canadian expert on Russian and Central and Eastern European issues, agrees the legislation, which he’d be pushing for years, wouldn’t have been passed without her. “In the current geopolitical environment, Canada couldn’t ask for a better foreign minister,” Kolga says. But Kolga adds that he’d like to see faster movement on using the law to implement sanctions, and he thinks the government needs to make a bigger priority of co-ordinating responses to Russian disinformation campaigns.

Not everyone agrees she’s spreading liberalism globally, however. David Carment, professor at the Norman Paterson School of International Affairs, issues annual report cards on foreign policy and he gave Freeland a B- last year, arguing she doesn’t “represent liberal values” and calling her “deeply conservative.” He had yet to assign her a grade for 2018.

On the Saudi file, Freeland has been criticized for executing foreign policy “by tweet,” but Cotler says her tweet calling for the release of political prisoners Raif and Samar Badawi was the culmination of ongoing advocacy.

Retired Canadian ambassador Larry Lederman agrees she should be pushing the Saudis, but he doesn’t agree with announcing “foreign policy by tweets.” The tweet, he says, caused trade interruptions and problems with other Gulf countries that “don’t agree with embarrassing the Saudis.”

Ben Rowswell, Canada’s one-time ambassador to Venezuela, argues, however, that tweeting is common practice in diplomacy. “The story is not about us as a country using an inappropriate method, it was a massive overreaction by Saudi Arabia. They really quite embarrassed themselves as a country with their reaction.”

Recent revelations from Global Affairs Canada documents released to Global News also show that the tweet was the culmination of months of failed diplomacy, including high level meetings and communications.

Shuvaloy Majumdar, Munk Senior Fellow with the Macdonald-Laurier Institute, thinks she could have approached the file differently.

“It was fine that she tweeted her disdain in English,” Majumdar says. It was not fine that [she] doubled-down in Arabic and tried to look like the government of Canada was destabilizing a G20 partner.”

Around the corner from Saudi Arabia, in Israel, most agree Freeland has done a good job.

“What can Canada do as a friend to Israel?” Majumdar asks. “Bilaterally, there are things that aren’t necessarily sexy – science collaboration, co-operation between security officials, working to counter the boycott divestment sanctions movement – all of which this government has maintained.”

The Centre for Israel and Jewish Affairs CEO Shimon Koffler Fogel says his organization has been impressed.

“On the files we follow most closely, Minister Freeland has been strong, consistent and principled,” Koffler Fogel says. “She has demonstrated herself to be an engaged and committed friend of Israel, appreciative of Israel’s serious security challenges and enthusiastic about shared values between Canada and Israel. “

During her October visit to Israel, she struck a good balance, says Cotler, who was there at the same time.

“She got praise in Ramallah and Jerusalem,” he says. “She didn’t change what she had to say in either place.”

Rowswell, who was Canada’s ambassador to Venezuela when the country’s democratic wheels came off, gives Freeland credit for the directness with which she approached this challenge.

In 2017, the Maduro government threatened to shut down the legislative assembly and Venezuelans took to the streets. Rowswell says they debated what to advise the minister to say.

“On March 31, 2017, the communiqué comes out from Chrystia Freeland’s office saying ‘Canada calls on Venezuela to restore democracy,’” Rowswell recalls. “That made her one of the first world leaders to call a spade a spade in Venezuela. It was a watershed moment. Very quickly many other countries started using the same language.”

The other file on which Freeland has distinguished herself, says Rowswell, is Russia and Ukraine. She’s openly criticized Russia over its invasion of Ukraine, and its latest moves in the Sea of Azov.

Kolga remembers when Freeland’s predecessor Stéphane Dion announced Canada would re-engage with Russia, but that all changed when Freeland took over.

“She clearly understands the Putin regime,” he says. “It’s not the kind of regime with which you can engage in any formal way, and I think Dion believed he could. He was completely naïve about the situation; Chrystia is not. She understands eastern European politics very well.”

Lederman, who says overall her performance is “okay,” isn’t sure she’s performing ideally on Russia, however. “Why isn’t she sitting down with [Sergey] Lavrov?” he asks.

Prime Minister Justin Trudeau’s mandate letter to Minister Freeland in early 2017 asked her to “restore constructive Canadian leadership in the world” and “promote Canada’s interests and values.” She has her detractors, but the hard-earned medals in her stoic, principled war chest make it hard to deny she’s working toward that goal.