Pro-Police Rally in Hong Kong - We’ve See This Before in Taiwan: J. Michael Cole in the Taiwan Sentinel 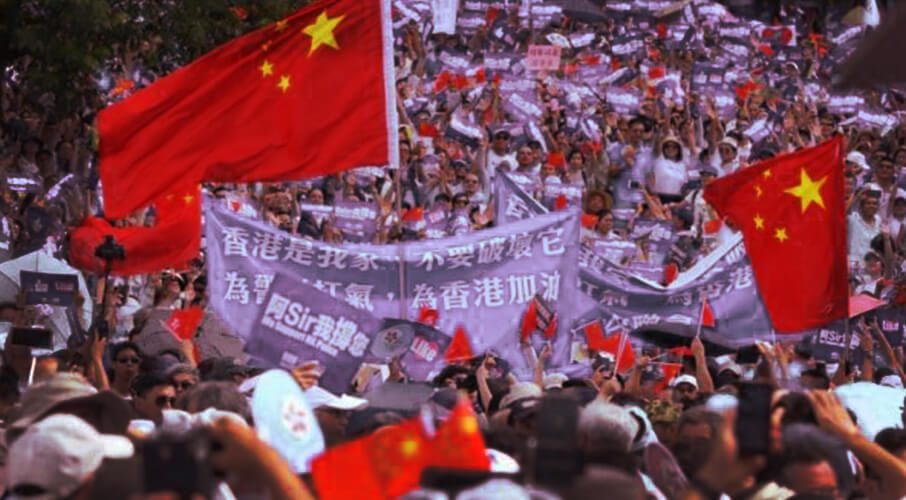 Thousands of people participated in a rally in Hong Kong on Sunday to show their support for Hong Kong police, which over the past month have been deployed to counter the mass protests that have spread over a controversial extradition bill.

Some Hong Kong media reported that as many as 165,000 people, most of them dressed in white and blue and waving People’s Republic of China flags, turned up at the rally at Tamar Park. Police estimates set the size of the crowd at 53,000; foreign media present at the scene reported there were no more than a few thousand, which based on photographic evidence appears to be closer to the truth.

Watching footage of Sunday’s protest, I was struck by how reminiscent the whole affair was to a similar rally — this one held in Taipei in May 2014 — organized to “support” Taiwanese police in the wake of the Sunflower Movement’s three-week occupation of the Legislative Yuan over a controversial cross-Strait services trade agreement. The rally was organized by a group that called itself the “New May Fourth Movement.”

Among the many things in common between the two pro-police/government rallies were: (1) inflated crowd estimates by the organizers and pro-government/Beijing media; (2) coordinated color themes (“white shirts” in Taiwan, white and blue in Hong Kong); (3) national flags; (4) pro-stability versus depiction of protesters as “disorderly violent mobs”; (5) pro-Beijing themes (unification T-shirts in Taiwan, pro-annexation bill in Hong Kong); (6) involvement by pro-Beijing/unification groups (the triad-linked China Unification Promotion Party and the New Party in Taiwan, independent New Territories West lawmaker Junius Ho [何君堯] in Hong Kong, who once said of the Occupy Central protesters that they should be “killed without mercy, as one would destroy an enemy”); (7) and a salient age difference between the pro-police groups (60s, 70s) and the youth-led protesters (20s, 30s) they opposed. In both cases, a large segment of the participants appeared to be Chinese (spouses in Taiwan, immigrants in Hong Kong).

The high figures given for the two pro-police rallies, mainly spread by pro-Beijing media in Taiwan and Hong Kong, were disinformation meant to give the impression of high levels of public support for law enforcement, the embattled governments, and opposition to the protests by a “silent majority.”

In both cases, there also were signs suggesting that many of the participants were from out of town and that several of them, having been given free transportation to the site of the rally, weren’t exactly clear as to why they were there or what they were rallying for. Similarly, participants in Taiwan and Hong Kong were offered small sums of money, as well as a free lunch box, for their efforts. A SMS message sent prior to Sunday’s rally at Tamar Park promised HK$1,800 and a free lunch for each participant, along with instructions to wear white or blue shirts.

This, as many other things (e.g., reliance on organized crime to assault government critics), tells us that United Front Work groups in Taiwan and Hong Kong use the same playbook and rely on a very similar m.o. to counter civil society during anti-Beijing protests — underground crowd mobilization, financial incentives from sources unknown, social stability meme, color themes (white as “purity”), and misleading coverage by pro-CCP media. In both cases, it is unlikely the participants cared at all for the welfare of law enforcement officers in whose name they had ostensibly congregated; the aim of their activities was purely propagandistic, part of an effort by the CCP apparatus to create a moral equivalence between the two opposed groups and to undermine, if not discredit, anti-Beijing civil society.

J. Michael Cole is a Taipei-based senior fellow with the Global Taiwan Institute in Washington, DC, the Macdonald-Laurier Institute in Ottawa, Canada, and the Taiwan Studies Programme at the University of Nottingham, UK. His latest book, The End of the Illusion: Cross-Strait Relations Since 2016, was published earlier this month