Protecting Innocents in Combat: New proposed legislation to deter the use of human shields 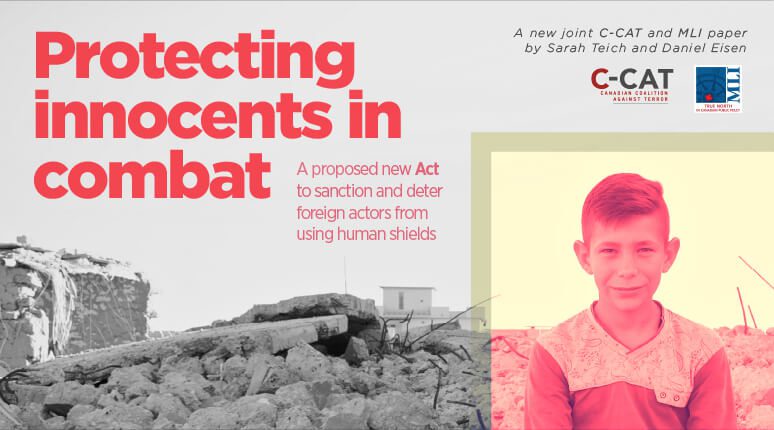 OTTAWA, ON (May 13, 2021): Even as Hamas launches attacks at civilian targets, the Iran-backed terror organization hides its assets and operations amidst civilians to complicate the response from Israel. While using human shields is universally understood to be a war crime, the tactic has long been employed with impunity by terror groups, rogue nations and other hostile actors. But what can Canada do about it?

In a new joint publication by the Canadian Coalition Against Terror (C-CAT) and the Macdonald-Laurier Institute (MLI), titled “Protecting Innocents in Combat,” MLI senior fellow Sarah Teich and C-CAT founder Danny Eisen provide an overview on the pervasive use of human shields and the international action to combat it, and propose new Canadian legislation to deter and sanction its use.

Not only are civilians harmed by the use of human shields, but democracies are also presented with no-win scenarios on and off the battlefield. A response to eliminate the threat risks harming civilians, and to remain passive invites the further use of the tactic by belligerents. Hamas is hardly alone in its use of human shields. Hezbollah has been known to manufacture missiles amidst civilian sites. And, as Teich and Eisen detail, ISIS, the Taliban, Houthi rebels, Boko Haram, Al Shabab, and many more terrorist entities employ the practice regularly.

NATO itself has launched an initiative to spotlight and counter the use of human shields, and there is a pressing need for countries like Canada to show leadership on this issue.

“What we establish in this publication,” says Teich “is the need and ability for Canada, as a human rights leader, to heed international consensus, answer NATO’s call to action and pass legislation to deter and sanction the use of human shields.” Eisen adds that “we need to do this both to support our international partners, but also to provide these tools to Canadian institutions trying to protect civilians and advance our national interest.”

The proposed legislation prescribes deterrence through sanctions combined with “naming and shaming,” as spelled out in the document’s Foreword, co-authored by Teich and David Matas, an international human rights lawyer and a Senior Fellow at the Raoul Wallenberg Centre for Human Rights. As they note, “sanctions are an important tool to address impunity for atrocity crimes.”

States are not excluded from the list of violators. “Let’s remember the circumstances surrounding Ukrainian Airlines Flight PS752,” notes Eisen. Iran’s Islamic Revolutionary Guard Corps (IRGC) shot down this aircraft with the loss of 177 lives, including 55 Canadian citizens and 81 permanent residents.

“There are implications that Iran did not shut down its airspace as part of a calculation that the presence of civilians – human shields – would mask its impending missile strike against US and Iraqi forces. This calculation placed thousands of lives in jeopardy, in addition to the hundreds killed by IRGC missiles on PS752.”

"This use of commercial air traffic as a form of human shield by Iran is entirely consistent with the regime’s multi-billion-dollar sponsorship of terror proxies like Hamas and Hezbollah which are amongst the globe’s most egregious perpetrators of human shields-related violations."

As the federal government and the transportation committee consider how to provide justice for the families of the victims of PS752, Ottawa should consider the legislation proposed by Teich and Eisen as a meaningful first step toward holding the responsible parties to account.

“Palestinians under the yoke of Iran-backed terrorists, passenger flights over the skies of Tehran, children in ungoverned spaces across Africa and Asia are objectified and deployed as human shields,” says Shuvaloy Majumdar, Foreign Policy Program Director at MLI’s Centre for Advancing Canada’s Interests Abroad and Munk Senior Fellow. “In this timely research and proposed law reform, Teich and Eisen offer indispensable solutions for Canadian leadership in combatting this practice.”

To learn more about the practice of human shields, and how Ottawa can work to combat it, click the button below.

Sarah Teich is a Canadian attorney and consultant based in Toronto, Canada, a Senior Fellow at the Macdonald-Laurier Institute, and a legal adviser with the Canadian Coalition Against Terror (C-CAT). Danny Eisen is the founder of C-CAT.