Public Policy and Politics in the 2019 Election: New Commentary by Sean Speer 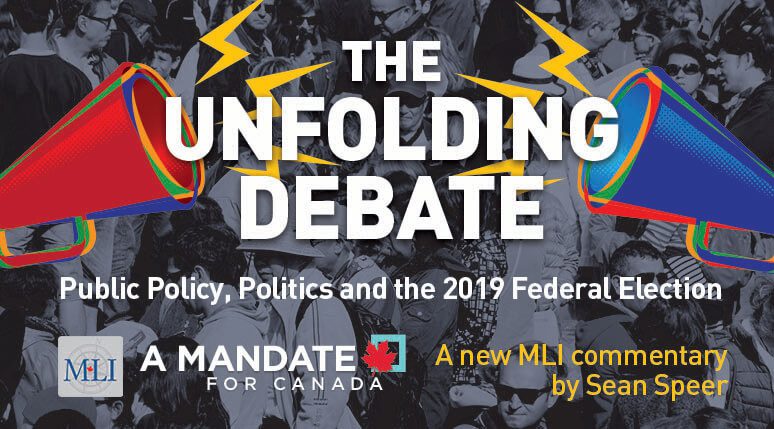 OTTAWA, ON (July 25, 2019): With the federal election fast approaching, Canadians are at a critical juncture. With that in mind, what are the biggest policy issues facing voters, and what sort of impact will the coming election have on Canadians as a whole?

For the latest instalment in MLI’s “A Mandate for Canada” series, Munk Senior Fellow Sean Speer takes a closer look at some of the most important policy issues that may animate the coming campaign.

Speer’s commentary, titled The Unfolding Debate: Public Policy, Politics and the 2019 Federal Election, examines the key issues and the likely ways in which they will (or will not) play out on the campaign trail. Speer’s report serves as an invaluable resource for all Canadian election watchers.

According to Speer, this commentary aims to “contextualize the federal election campaign, the policy issues that will animate it, and what it means for businesses, workers, and the Canadian economy.”

“The issues and accompanying analysis in this commentary provide a good primer on how policy and politics may intersect in the coming months and what it means for Canada and Canadians.”

Drawing from public polling and expert analysis of the top issues that could shape the 2019 election, Speer settles on a few main topics.

On the economy, he points to the fact that Canada is experiencing historically low unemployment and among the best GDP growth within the G7. However, Canada is also suffering from consistently poor business investment, stagnant wages, and vastly uneven economic conditions for different Canadians.

“To an extent we’re observing two or even more economic stories in Canada,” writes Speer. Canadians’ perceptions of these different narratives will reflect where they live, the nature of their work, and more, meaning that the competing interpretations of Canada’s economic health will likely remain hotly contested during the writ period.

On the public finances side, Speer assesses that the issue ought to be receiving more attention than it presently is. With both the Liberals and Conservatives committed to deficit spending for at least five years, the chance for a robust debate on our nation’s finances may fall by the wayside come October.

Similarly, Speer argues that there is much broader convergence when it comes to climate change policy than the media or the politicians claim, with the Liberals favouring a wide-reaching but ultimately low-cost carbon tax, and the Conservatives preferring a levy solely intended to target the biggest polluters.

Precisely the opposite problem exists when it comes to pharmacare. According to Speer, there may be wide divergence between the government and opposition on this area, with the Liberals likely to develop some policy on a single-payer system and the Conservatives unlikely to follow suit. However, as Speer points out, some 80 or 90 percent of Canadians are well-served by the current system and a nuanced, targeted approach would better serve the needs of the nation.

“The better solution, in my view, is to build on the current mix of public and private insurance and target those who are currently left behind,” says Speer.

Finally, Speer finds that the labour market is increasingly favouring those with a certain set of skills and experiences, including those with post-secondary education. This in turn is creating “bifurcated opportunities,” feeding into the sort of political populism that has been witnessed in Europe, the US, and elsewhere in the world. This coming election may present a good opportunity to discuss these trends and propose solutions for working class men and women.

To read Sean Speer’s invaluable assessment of the election that is to come, check out MLI’s latest commentary paper here.