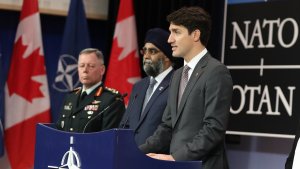 The key issue is not how much money NATO members are spending on defence, but rather whether members are prepared to reinforce Alliance solidarity, writes David Law.

President Trump’s letter to a number of NATO allies – including Canada – in the lead-up to the NATO Summit on July 11-12,  warning them that America is running out of patience as regards to their failure to increase defence spending is a cheap shot, but a shot nonetheless. It needs to be taken seriously.

However, NATO defence spending is about more than one-digit numbers. Here is a run-down of some of the key issues.

First and foremost, NATO’s two percent benchmark is not a binding commitment, it is a guideline. If a country spends under 2 percent, it does not owe the US or anyone else the difference, contrary to President Trump’s claims.

What goes into making up the can vary from country to country. So in 2017, the Defence Minister of Canada, one of NATO’s deemed defence spending laggards, suggested that if his country included in its spending on the Coast Guard and veterans’ pension, as some other countries did, it would come in at a more respectable 1.2 or 1.3 percent – still not 2 percent, but higher than it is often stated (and it is expected to grow further under Canada’s current defence plan).

A related problem is that money spent on guns that stay holstered gets counted in the same way as that which is actually used in missions. This is what German Defence Minister Ursula Von der Leyen had in mind when she called last year for an “activity index” that would take participation in foreign missions into account when assessing budget earmarks for defence.

The defence spending issue also has to be seen through the prism of the widely differing defence profiles of NATO member states. So, for example, while Iceland has contributed to NATO missions, it does not have an army. Virtually all NATO members have participated in NATO’s extra-treaty area deployments but the nature of their participation has varied enormously, as befits an organization as diverse as NATO. Only the United Kingdom and France come anywhere near to harbouring America’s global ambitions.

Then, there is the question of how a country’s defence assets are integrated into its overall security policy. Security is, of course, only partially about guns. It also has to do with a country’s soft policy initiatives, for example, the effectiveness of its information policies in supporting its overall foreign and security policy, and its efforts to engender socio-economic change in developing countries that are designed to reduce the potential for conflict – and often do.

The Development Assistance Committee of the OECD, the club that brings together the world’s leading economies, publishes annual figures on member countries spending on development policy. This now includes measures to ensure that a country’s security sector is both effective and at the service of the population. While in 2015, the US was the bigger spender overall, its ranking in comparative outlays was only 9thof 29 (admittedly, Canada is not ranked all that much higher, although European countries consistently do well in this measure).

And then there is the track record of the Alliance’s biggest defence spender in its post 9/11 wars. According to a recent Brown University study, America will have spent $5.6 trillion by 2018 in conflicts in and around Afghanistan, Iraq, Pakistan and Syria with extremely modest results – and I am being charitable here.

America’s allies are not necessarily efficient in their more modest defence spending. For example, European Union countries have nineteen types of armoured infantry fighting vehicles, while the US has only one. According to the European Commission, some twenty-five billion euros are wasted annually owing to the duplication of defence assets.

Since a NATO decision in 2014 to work towards a 2 percent target – in reaction to Russia’s machinations in and around Ukraine – the trend has steadily been reversed.

Since a NATO decision in 2014 to work towards a 2 percent target – in reaction to Russia’s machinations in and around Ukraine – the trend has steadily been reversed. The defence spending of NATO’s European members is expected to increase by 1.3 percent in 2018. Eight NATO member countries are expected to reach or over 2 percent in 2018 and the overall trend is upwards.

I would be remiss not to explain that NATO totally outguns Russia. In 2017, Moscow spent some 66 billion dollars on its defence sector. In the same year, NATO countries spent some 900 billion. And as anyone who has seen upfront just how the Russian state dispenses its resources will know that these numbers reflect only a small part of the reality. Readers may remember the story of Mathias Rust, who in 1987 flew a light aircraft over Russia’s border defences, landing it famously on Red Square. Russia’s strategic capacity may have improved in the interim but at most only quantitatively.

Putin once remarked that anyone would be crazy to take on NATO. He probably thinks this is still true. But he understands that if NATO fails to work cohesively, we are in a completely new ball game.

So, the key issue is not how much money NATO is spending on defence but just how determined the members states are prepared to maintain the historical solidarity that has served them so well over almost seven decades now.

Trump’s letters are a dagger in the back of this solidarity. More ominously, it is about creating a situation in which Trump’s America can embrace Putin’s Russia, moving beyond its behaviour in the Crimea, eastern Ukraine, Syria and interference in the US elections. Discrediting America’s NATO Allies makes it easier to set the stage for a US-Russian détente.

Ultimately, Trump seems determined to destroy the Western world order that, despite all its flaws, has brought so much prosperity and stability to the world over the last three generations. We still do not know the back story to the complicity between Putin and Trump, but I expect we will soon.

The situation is reminiscent of 1939. If the democracies of that epoch – primarily Britain, France and the US – had been effectively united against Hitler, there is a very good chance that World War II would have never taken place.

That it did owes to the democrats’ of yesteryear short-sightedness and disunity. Do we really have to go this way again?

David Law is a former Head of the NATO Policy Planning and Speechwriting Unit,  and Senior Fellow at the Geneva Centre for Democratic Control of Armed Forces. For more from David Law, go to www.davidmlaw.com.