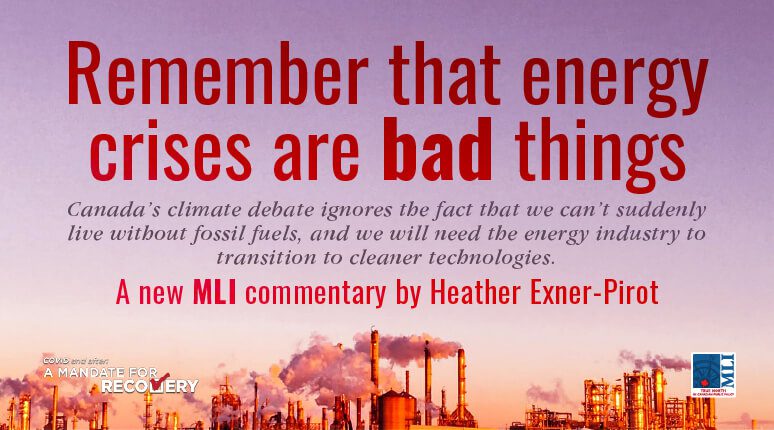 OTTAWA, ON (September 14, 2021): As electricity prices soar to record or near record highs across much of Europe due to an energy crunch, Canadians should remember that energy policies based on ideology, rather than reality, have significant consequences. Reducing global greenhouse gas emissions while ensuring sufficient energy supplies will require policies and solutions based in reality. Unfortunately, the Canadian debate on how best to reduce emissions has been transformed into a culture war.

In a new MLI commentary titled, “Remember that energy crises are bad things,” MLI Fellow Heather Exner-Pirot argues that Canada’s current climate debate ignores the fact that Canadians and the world can’t suddenly live without fossil fuels. Even during and after the transition to cleaner technologies, we will need the energy security provided by non-renewable sources for decades to come.

According to Exner-Pirot, by oversimplifying discussions around energy risks, we take for granted the tremendously beneficial energy security we currently enjoy. Recent examples such as the blackouts in Texas this February and the energy crisis in Lebanon serve as poignant reminders about the consequences of not taking energy security seriously. Moreover, the 1970s energy crisis demonstrated that abdicating Canada’s important role in global energy supply chains would only empower authoritarian actors at the expense of international partners dependent on energy imports.

“Energy is key to economic growth and human de­velopment,” argues Exner-Pirot. “And yet many of our policies are pre­cisely lining up [an energy crisis] not only in Canada, but among the society of nations. For those paying attention, there are many concerning signs.”

She warns that a demand slump during the COVID-19 pandemic stunted production and private investment into the oil and gas sector, alongside ambitious carbon reduction policies and investor preferences. Now that demand is climbing, production is not well-placed to meet that demand, leading to higher prices. Fossil fuels including coal, oil and natural gas still account for over 80 percent of global energy needs. If countries like Canada further cut their production due to climate priorities, actors like OPEC and Russia will almost certainly fill that gap and may also use their energy production to advance their own geostrategic interests at the expense of Canada and her allies.

It is also undeniable, however, that climate change presents a real and pressing issue, one to which Canada must respond in order to help prevent catastrophic damage to the planet’s biodiversity and human quality of life. In Exner-Pirot’s view, the climate crisis is really an energy crisis, and in that sense, Canada can play a major role in fostering a global energy transformation.

Canada’s ability to contribute to global climate solutions is undermined by a regulatory regime that hamstrings both traditional energy infrastructure as well as infrastructure for a green transition. Moreover, rather than sidelining the oil and gas industry, Exner-Pirot urges policy-makers to include them in the process of transition.

“It is hugely self-defeating to eliminate the energy industry – ‘big oil’ – from the task. They are the ones that have the most capacity and expertise to develop new technologies, build new infrastructure on a continental scale, and secure the investment to make it feasible,” argues Exner-Pirot.

“If the crux of the problem is our energy habits, then it will do us no good to eliminate the experts in energy from the conversation.”

Heather Exner-Pirot is a fellow at the Macdonald-Laurier Institute.