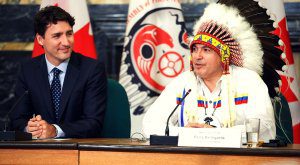 At any given time, the Government of Canada is dealing with hundreds of legal matters with Indigenous Canadians.  This is inevitable given the complexity of Indigenous rights, the history of Canadian policy and patterns of government “lawlessness” that left the country liable for the administrative misdeeds of the past 150-plus years.  The number, diversity and potential impact of these legal challenge represents a substantial challenge to the status quo in Canada – and one of the few recourses available to Indigenous peoples seeking justice and fairness inside Canada.

While the right of Indigenous peoples to pursue their issues in the courts is inviolate, far too little attention has been paid to the costs and consequences of the constant punting of Aboriginal claims into the costly and slow legal process.  It is not, to be frank, a fair fight. Governments have more resources and delays can drag on for years; Indigenous peoples, in contrast, pay heavily for the delays in resolving their results and pay even more to move their claims through the legal process.

Many of the Indigenous cases have major stakes involved.  The Supreme Court decision on Marshall (1999), for example, commercialized Indigenous treaty rights in the Maritimes.  The Tsilhqot’in (2014) decision recognized the continuing legal existence of Indigenous territorial rights.  Other cases restored confiscated Indian reserves, established the foundation for treaty land entitlement process on the prairies, and mandated “duty to consult and accommodate” procedures for resource and infrastructure projects.

First Nations, Métis and Inuit win many, if not most, of the court cases.  Canada has been transformed, in constructive and important ways, through these decisions that involve the application of Canadian (and British) laws to Indigenous circumstances.

The courts clearly have vital and transformational roles in Canadian law, politics and public policy.  The courts are key to shaping and defining the long-term relationships between Indigenous peoples and other Canadians, including the government.  The fundamental problem does not rest with the law.  Rather, the problem is the slow, costly processes involved in moving issues through to a resolution.

One example may suffice.  For many years, the Government of British Columbia repeatedly challenged legally the integrity of Indigenous societies in the generations before European contact.  The government’s position was that the historical evidence did not support the idea that Indigenous peoples had organized stable societies, an argument that flew in the face of archeological and anthropological evidence and, even more, Indigenous oral and cultural tradition.

British Columbia backed off this line of argumentation, which lost repeatedly and most dramatically in the Tsilhqot'in victory in the Supreme Court in 2014.  For First Nations, it meant that they no longer had to stand in court, on a regular basis, to assert that they existed as an historic people.  The ridiculousness – and the offensiveness – of this situation is obvious, but this is only one small step of many that are needed.

During her time as Minister of Justice, Jody Wilson-Raybould pushed hard to transform the government’s approach to legal relations with Indigenous peoples.  Her work, though promising, did not come to fruition.  Real and substantial changes will take a long time, for the simple reason that Indigenous communities can be forgiven for not counting on short-term promises of reform and new approaches.

There are likely thousands of legal issues awaiting resolution – and the cost of delays in addressing these problems weighs disproportionately on Indigenous peoples, especially in the absence of systematic, fair, transparent and efficient ways of dealing with outstanding issues of Indigenous and treaty rights.

When issues like the Mi’kmaq fishery and the New Caledonia struggle intrude on the affairs of non-Indigenous peoples, demands for immediate action accelerate.  First Nations pushed for a resolution of the “moderate livelihood” from 1999-2000 when the decision came down; only when the frustration of non-Indigenous fishers boiled over in fall 2020 did the unresolved legal issue attract high-level political and public attention.

When the impact of the legal dispute rests almost entirely on the Indigenous peoples, the cases can linger for years, if not decades.  These are not easy legal or political matters, but delaying the resolution only adds to the frustrations and political delays.

It is important that Canadian revisit Jody Wilson-Raybould’s ideas and those that have circulated in Indigenous circles, including through the Royal Commission on Aboriginal Peoples, for a long time.  New Zealand reset their legal relationship with the Maori in the 1970s and brought order, process and integrity to convoluted and unresolved matters.  It is time for Canada’s Kiwi moment.

At present, Canada has a system that costs a great deal of money, delays resolution for years if not decades, and leaves Indigenous peoples without clear and definitive solutions to long vexing problems.  Major reforms are required if Canada hopes to address the major backlog of Indigenous cases and if we are to resolve the festering legal sores that cause such frustration across the country.